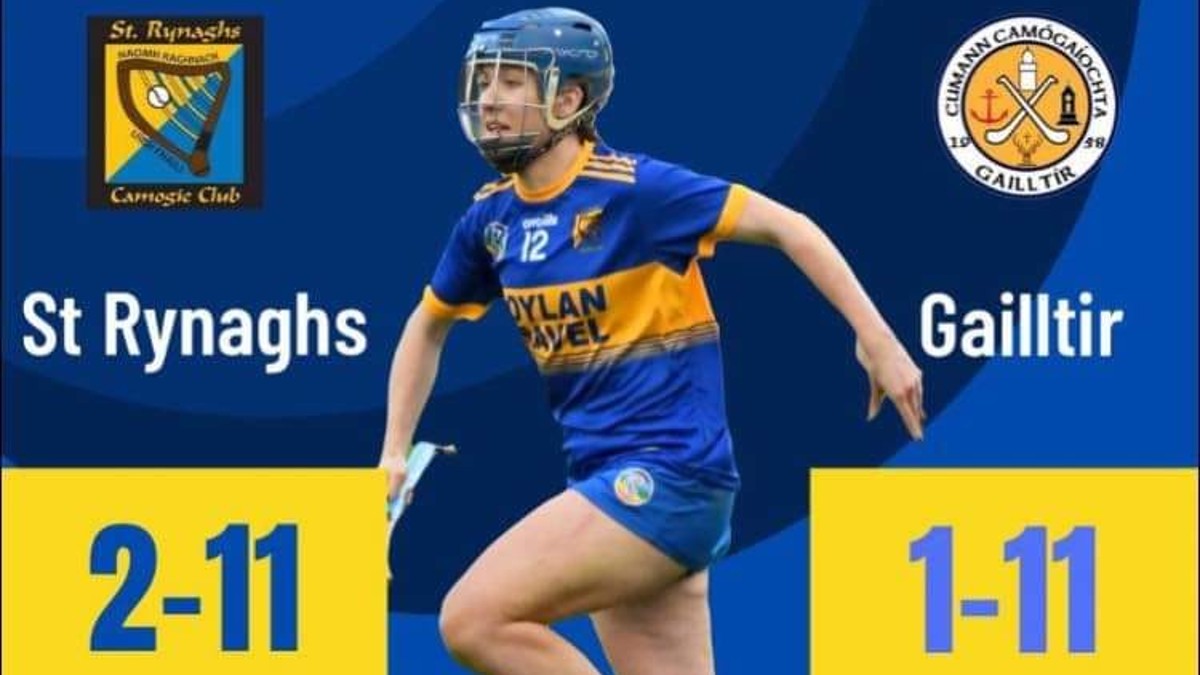 An unstoppable goal from a penalty by Róisín Egan, early in the final quarter was the differential as St Rynagh’s confirmed their marginal superiority over Gailltír with a 2-11 to 1-11 victory in the AIB All-Ireland intermediate club camogie semi-final at Éire Óg Nenagh.

The sides have enjoyed a wonderful rivalry in recent years, with Gailltír beating Rynagh’s in an All-Ireland final before the Offaly women exacted revenge in the 2020 decider played in December and repeated the trick to book their spot in this year’s decider.

The penalty was awarded after a foul on Siobhán Flannery by Hannah Flynn, just a minute after Flannery had rifled a first-time shot of the sod inches wide when a goal seemed certain.

This time, her contribution did lead to a green flag, though Egan’s shot had to be inch-perfect and a bullet with that, as it hit the top corner to Ciara Jackman’s right, the ‘keeper almost getting her hurley to it.

Egan was monumental throughout, along with Kate Kenny and Flannery, and Kenny followed up quickly with a stupendous score, her fifth point. Within minutes of being level, Gailltír would go five down.

The gap went to five but they got it back to two, Molly Comerford and Annie Fitzgerald splitting the posts. Flannery landed a monstrous point with the last puck from a free and it was the Faithful women that progressed.

Gailltír started ideally with a sixth minute goal from the exciting Alannah O’Sullivan, who was alert to pounce when St Rynagh’s goalie Ellen Gilligan, a hero of the All-Ireland final, was caught advancing too far under Kate Lynch’s delivery and could only bat it up into the air. O’Sullivan was in like a flash to bat the sliotar to the net.

Crucially, St Rynagh’s responded in kind inside 60 seconds, when Linda Sullivan dispossessed Jackman as the netminder attempted to gather the sliotar following a brilliant run by Emma Corcoran, and was able to finish to an empty net.

It was nip and tuck from there until the penalty, as Kenny and Aoife Fitzgerald exchanged points, while Laoise Forrest stood out for Gailltír with three points from play. But once Egan billowed the net, the Offaly girls were clear and that was the margin in the end. The champions must now wait to see who will stand in the way of promotion to the senior ranks at All-Ireland level, as Portaferry (Down) and Salthill-Knocknacarra cross swords in Abbotstown today/tomorrow (Sunday).

An early goal by joint captain Emma McAliskey propelled Derrylaughan Kevin Barrys to the AIB All-Ireland junior B decider, as a result of a hard-fought 1-5 to 0-6 triumph over Oran. The Red Hand representatives held the whip hand for the majority of proceedings as a result of that strike but they had to withstand a gutsy comeback from their Roscommon opposition.

Claire Curley and Caitriona Regan chipped away at the deficit before Orla Connolly brought the sides level from a 45 but Derrylaughan’s response was impressive as Elisha Gervin split the posts twice late on to book the final berth.

They will play Knockananna in the decider, after the Wicklow champs proved far too strong for Manchester outfit Fullen Gaels, prevailing by 2-15 to 1-2 in Abbotstown. Knockananna fell just short in last season’s decider played the week before Christmas, when another Tyrone team, Naomh Treasa edged them out and their motivation was very much in evidence as they eased clear.

The senior semi-final between old rivals Sarsfields (Galway) and Slaughtneill (Derry) was one of a number of games that fell foul of the havoc played by the weather on pitches but it is now scheduled to take place in Gorey today/tomorrow (Sunday) at 2pm.