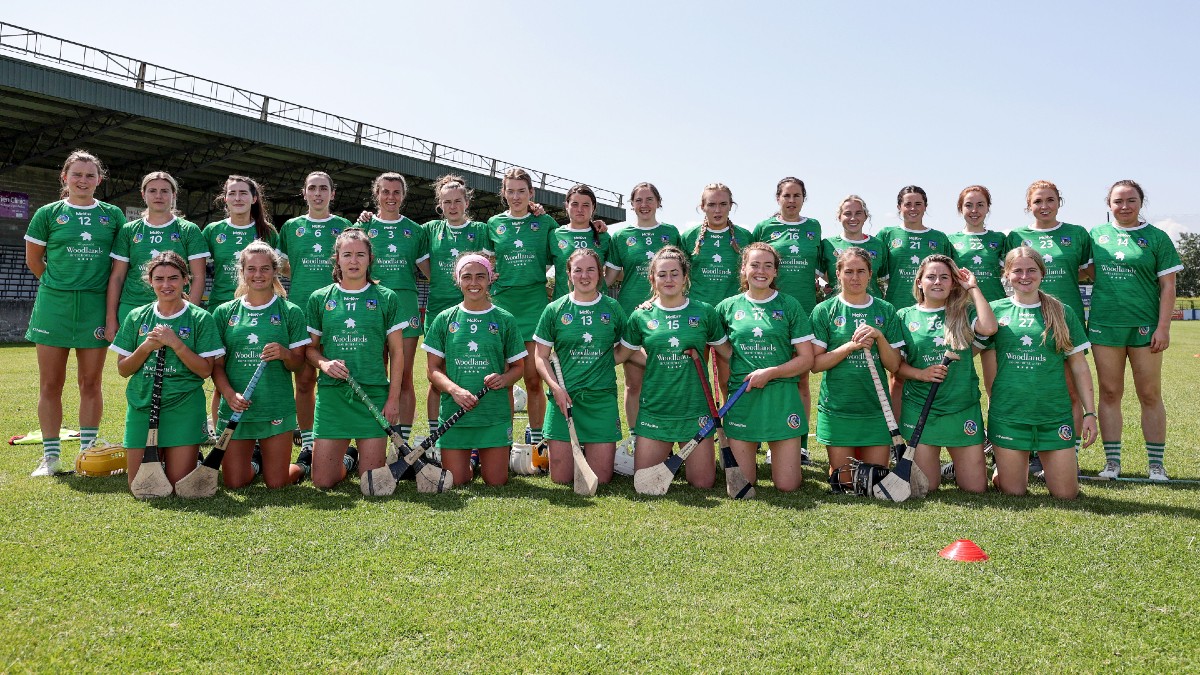 By Kevin Egan (Limerick were one of three teams to secure their senior survival.  Photo (c) Inpho Photography)

It was a busy afternoon in the All-Ireland senior camogie championship, with Dublin, Clare and Limerick the happiest teams after they secured senior status for 2022, while Galway travelled to Kilkenny and picked up a win against the reigning All-Ireland champions.

Despite playing with 14 players for 45 minutes in the battle to top their group and so secure an automatic semi-final place, Galway edged out a thrilling game with Kilkenny at John Locke Park in Callan, 1-13 to 0-15.

Both sides had already secured their place in the knockout stages thanks to prior wins over Clare and Westmeath, but Galway secured a huge psychological blow against their main rivals as they overcame the dismissal of corner-forward Catherine Finnerty to pick up an away win.

Ultimately, Galway’s 1-3 without reply after half time, which helped them turn a three-point deficit in to a three-point lead proved to be the decisive period of this game. Siobhán McGrath found the net early in the second half to help her side lead after an opening half in which they failed to score from play. However, the 2019 All Ireland champions showed their attacking threat to rattle the net, with Niamh Kilkenny and Ailish O’Reilly adding scores to  help them establish a lead.

Denise Gaule was accurate from a number of frees while Mary O’Connell and Aoife Doyle also found the target to keep Kilkenny in the game and set up a dramatic finish. Kilkenny almost found a way through in injury time but some heroic last ditch defending during the four minutes of injury time helped Galway hang on to take the victory.

Cork will join Galway and the winner of tomorrow’s game between Tipperary and Wexford in the pot for automatic semi-final places after they overcame Waterford by 2-19 to 3-8 at Páirc Uí Rinn.

The Rebels didn’t have things all their own way and fell behind to two early goals, but green flags from Katrina Mackey and Amy O’Connor in first half stoppage time turned the tide Cork’s way, and strong scoring performances from Fiona Keating, Orla Cronin and Mackey in the second half ensured Waterford never threatened an upset.

Limerick secured their senior status and condemned Offaly to the relegation playoffs into the bargain thanks to a two-point win at the St. Rynagh’s club in Banagher, with late scores from Caoimhe Costelloe and Mairéad Ryan proving crucial in a 0-17 to 2-9 victory for the Shannonsiders.

Costelloe shot 0-8 (0-7f) over the course of the hour and was a constant thorn in Offaly’s side, with Caoimhe Lyons and Aishling Scanlon posting three points each for the victors. Orlagh Kirwan’s goal kept Offaly in touch at half time, 0-8 to 1-4 adrift, but Limerick burst out of the traps at the start of the second half with three scores from Scanlon and Lyons. Siobhán Flannery replied for Offaly and the Faithful women stayed in touch until Mairéad Teehan’s goal drew them level with eight minutes to play.

Limerick edged in front, Laura O’Neill had to make a crucial save to deny Offaly a third goal, But Flannery levelled the tie once again, setting up a dramatic injury time finale.

The contest at Cusack Park in Ennis was another Munster vs Midlands clash with relegation at stake, Clare eventually prevailing by 2-12 to 0-12 thanks to first half goals from Eimear Kelly and Áine O’Loughlin.

The Banner women started well and led by 2-3 to 0-1 after the first quarter, with the sides adding three points each after the water break. Alongside the two goalscorers, Chloe Morey was the only other scorer for Clare in the half,  with only Siofra Ní Chonaill adding her name to the scoresheet as they kept Westmeath at arm’s length, denying the visitors the clearcut goal chance that they badly craved to try and get back into the game and prevent their descent into a relegation playoff.

The third relegation playoff of the day was at Páirc Esler in Newry, where a goal from Aisling Maher with five minutes of normal time to play was the crucial score in a 1-9 to 0-11 win for Dublin that preserves their senior status for another year.

Dublin underperformed spectacularly in round two against Waterford and they showed a lot of the same anaemic form in the first half of this game. Points from Anna Rogan, Saoirse McCartan and Niamh Mallon helped Down to an 0-5 to 0-4 interval lead, with Dublin goalkeeper Faye McCarthy having to be sharp to keep her side in the game.

Down continued to lead by one or two points throughout the second half until a long ball broke to Maher and the St. Vincent’s player was sharp and on target with her finish, pushing Dublin a point in front. Mallon replied to cut the gap to the minimum from a close range free and had possession again at the end chasing what would have been a crucial equaliser, but time ran out.