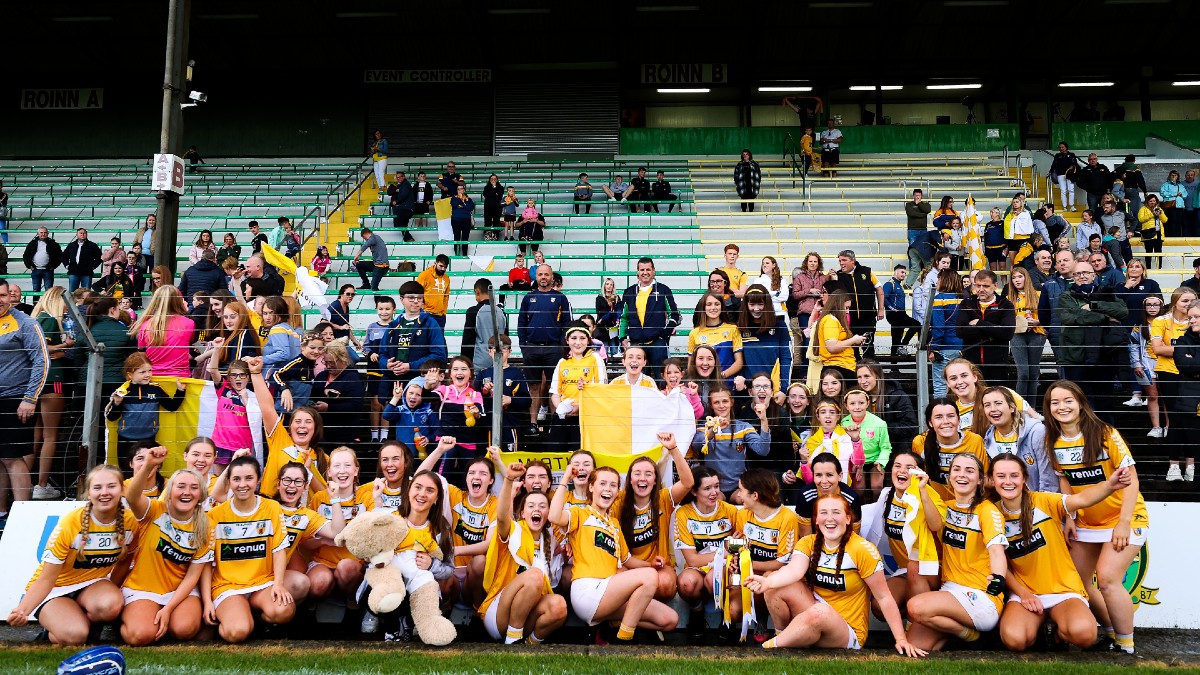 ONE week after winning an All-Ireland Intermediate title in Croke Park, Antrim’s Áine Magill doubled her collection with a Tesco Minor medal in today’s replayed final in Páirc Táilteann, Navan.

The Dunloy teenager was joined in the minor team by her twin sisters, Bríd at full-back who picked up the Tesco Player of the Match and Brónach in the half-forward line, as well as cousin and top-scorer Cassie McArthur, as the Saffrons survived a late scare from Offaly to collect a third title since 2017 at this level.

There were other links to the All-Ireland winning Intermediate side last week. First half goal-scorer Orlagh Laverty had two sisters, Christine and Ciara, in Croke Park while team captain Fionnuala Kelly is a younger sister of Maeve who picked up the Player of the Match award in Croke Park.

In contrast to the drawn tie a fortnight earlier this minor replay was an open game of camogie. While there were six goals scored, Orla Donnelly pulled off four brilliant saves in the Antrim goal and her Offaly counterpart Leah Gallagher also denied the Saffrons goals on just as many occasions.

Despite their openness at the back at times, Antrim was the better team. They started well, built up a lead that Offaly had to chase and were able to withstand the late Faithful onslaught which delivered three goals in a five minute spell during the final quarter.

Cassie McArthur was a huge threat at full-forward and her clubmate Áine Magill felt that getting her on the ball was important.

“We felt that we hadn’t played well in the drawn game and that we needed to open up more space in the forward line. We tried to leave space in front of Cassie and get her on to the ball in the open where she could run at them.

“It worked well and we created a lot of chances during the game.

“It has been a hectic few weeks but the past seven days have been the best of my life. I never set out at the start of the year thinking I would win two All-Ireland titles with Antrim and one of them in Croke Park. Better than all the dreams.”

Although Antrim started well they also hit a few wides and after six shots at the target in the opening ten minutes, they had only scored three points,

Áine Magill opening their account and McArthur tagging on the other two scores.

There was still that three point gap at the water break, 0-4 to 0-1, but then Offaly began to flex their muscles and suddenly Antrim were in danger with several runs right down the middle of their defence. From the first Cayla Fletcher was put clear but Antrim goalie Orla Donnelly stood firm and deflected the shot for a point.

Two minutes later Offaly again burst through the middle. Although the attack was pushed a little to the right, the sliotar came across the goals to the unmarked Clodagh Leahy who caught it with the hurl first time. But again Donnelly turned it over for a point.

What happened next gave Antrim the platform to dictate the game; a scoring blitz over a three minute spell midway through the second quarter delivered 2-3 without reply.

Magill and McArthur started the run, both pointing from frees. Then a long ball from Orlagh Laverty was caught high by McArthur and she ran clear to smash the sliotar to the net.

After Magill had pointed a great free from right on the sideline, she caught a high ball and delivered to the corner where Síne Woodhouse got inside and picked out Laverty to race clear for the second Antrim goal.

At 2-8 to 0-3, it was probably a little disappointing to concede three late points in the half to Leahy frees. There was another pointed free for Leahy at the start of the second half before the Saffrons took up the challenge once more.

Points from Laverty, Magill (45) and sub Monique O’Boyle were followed by a brilliant goal from Nuala Devlin who picked up the pass from Laverty on the sideline, turned her marker and ran 40 metres before unleashing a shot to the top corner.

At the second water break the game looked fairly comfortable at 3-11 to 0-8 but Offaly were still dangerous on the break.

They finally turned that danger into scores between the 49th and 54th minutes with sub and joint captain Grace Leonard creating the problems.

Clodagh Leahy rifled home the first goal after the sliotar wasn’t properly cleared from a drive forward by Leonard. Sinead Hanamy grabbed a second goal from a similar scenario a couple of minutes later and then Faye Mulrooney burst through for a third net lifter.

Significantly Antrim were able to tag on a point in response to each score, but the game was now down to five points and Orla Donnelly was needed once more to intercept an Offaly attack.

Nuala Devlin picked off a point on the break and Cassie McArthur found Evanne Martin for another score as the game slipped into the four extra minutes. Those scores made it safe for the Saffrons and Áine Magill completed the dream All-Ireland double inside a week.