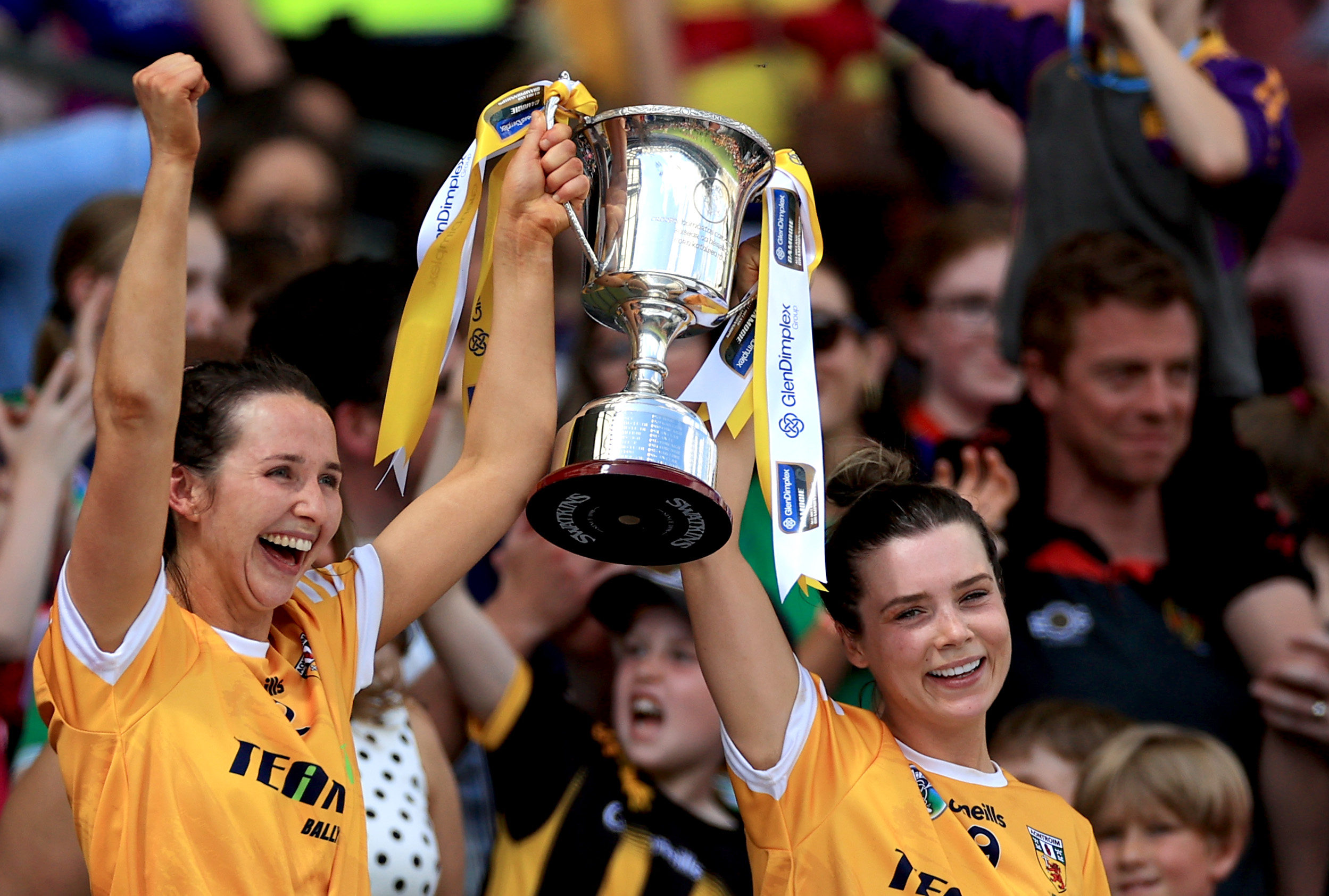 Four goals from Dervla Cosgrove including three in 84 first-half seconds, and three saves from Áine Graham were among the more notable events as Antrim came out on top of an action-packed Glen Dimplex All-Ireland Premier Junior Camogie Final.

This was a remarkable end to an inaugural campaign for the county’s second string, finishing in glory at Croke Park less than a year after their flagship side secured senior status by winning the intermediate title.

This victory suggests that the Saffrons’ production line is in fine working order but Armagh will rue the failure to convert even one of their goal chances, while a catalogue of defensive calamities left Cosgrove in for some of the easiest green flags she will ever register.

Former Cork star, Jenny Curry was a real threat for Armagh but they could not provide her with sufficient quality supply and in the second half, Antrim made sure the eight-time All-Star was at least doubly attended.

Cosgrove earned the player-of-the-match plaudits and there could be no arguments about that with her three-goal salve in under a minute and a half ultimately deciding the match, her fourth major cementing the verdict.

It was last year’s minor captain, Fionnuala Kelly that made the early impact though, after Armagh had begun confidently with points from Ellie McKee and a brilliant Ciara Donnelly strike.

The teenager, whose sister Maeve was player of the match for the intermediates last year, split the posts to get the team managed by Brian Kearney and Mark McFadden off the mark and then goaled in the eighth minute following a move started by Anna McNeill. When Cosgrove’s cross generated only the minutest of heavy touches from Ciarrai Devlin, Kelly was in like a flash to bat to the net.

His defence had been marked absent too often in that period and the Antrim native, who was joint manager of last year’s successful Antrim intermediate team, made two substitutions that helped shore things up for Armagh.

You sensed that the damage had been done and though Sinéád Quinn, Michelle McArdle and Donnelly (two) pointed, the Orchard women trailed by 4-3 to 0-9 at the interval.

It could have been very different but goalkeeping is clearly in the Graham genes as Áine, sister of senior netminder Caitrin, was extremely alert between the posts. Donnelly, after being set up by Curry, also rattled a shot off the butt of the upright.

Armagh gradually reassumed control in terms of play at least in the second half, and when Curry pointed in the 47th minute after a trademark flick, easy pick-up, side-step and finish, the margin was down to three.

Cosgrove’s close range finish after Devlin’s stupendous save from Nuala Devlin a minute later, followed by another Graham save from McArdle helped Antrim close it out.