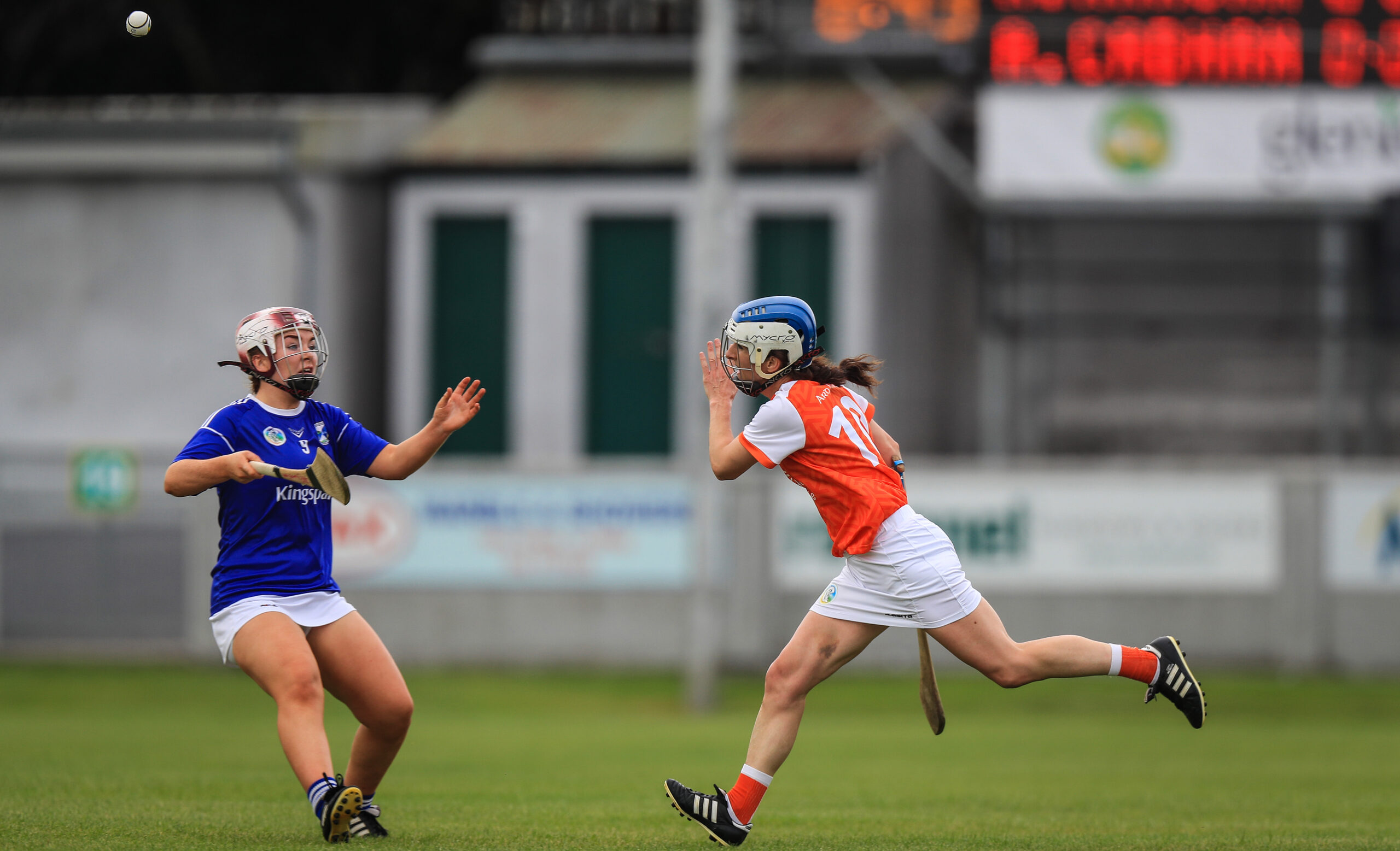 Armagh will contest the Glen Dimplex All-Ireland Premier Junior Camogie Championship final for the third year in succession in two weeks’ time, after their dominant second half display eventually saw off Cavan at O’Connor Park in Tullamore this afternoon.

The Orchard County, whose two defeats to Wexford in last year’s campaign are now their only defeats since 2019 at championship level, looked like they might put Cavan to the sword in the early exchanges of this contest, but they were undone by a combination of resolute Cavan defending and a significant bout of inaccuracy on their own part.

They started brightly with excellent points from Sinéad Quinn and Michelle McArdle, but five wides in the opening quarter meant that even though they dominated the battle for possession, there was only a point between the sides when Shanise Fitzsimons got Cavan off the mark in the 17th minute.

A Ciara Donnelly free restored the two-point advantage but the contest swung decisively towards the Breffni women in first half stoppage time, with Fitzsimons sprinting through from the left wing for the game’s first goal, followed by two quickfire points to make it 1-3 to 0-3 at the interval.

A host in injury stoppages at the start of the second half meant that the contest struggled to catch fire after the restart, with 12 minutes gone off the clock – though perhaps less than half that featured the ball in play – by the time Donnelly added her second point from another dead ball opportunity.

Erinn Galligan and Rosie Crower McKeever were the leading influences for Cavan as they held together the defence and repelled a number of Armagh attacks, and when a turnover ball and quick transition led to Shanise Fitzsimons picking up possession in behind the Armagh full back line and slamming in a second goal, it looked like a smash and grab raid might be on the cards for the underdogs.

Crucially, Armagh didn’t have to wait to get back on the front foot, as a powerful run and accurate finish from Sinéad Quinn resulted from the next attack, and that was to be the first score in a run of 1-8 without reply from Jim McKernan’s side.

Jennifer Curry had now been switched into the edge of the square after playing the first 40 minutes at wing forward, and she used all her experience to sidestep a defender and place a low shot underneath Jenny O’Rourke for an equalising goal in the 50th minute. This time, Armagh didn’t look back.

Curry added three more, Michelle McArdle and Leanne Donnelly were dominant at midfield and they each drew a white flag in the closing stages, while substitute Ciara Hill also got in on the act with a strike from 40 metres in stoppage time to help close out their passage to Croke Park.

“We knew ourselves that we should have been a few scores up but we didn’t panic, we said we’d reset and start again in the second half with a few positional changes and went about clawing it back, point by point,” said Curry of Armagh’s strong second-half showing.

“There’s going to be times that the opposition will have purple patches and they’re going to get scores, but we just had to be patient. If we got good ball into the forwards, we knew we’d do something with it. Then in the last ten minutes we used speed and space, and you can’t panic because in camogie anything can change in a few minutes.

“I thought about coming on board with Armagh for a long time before I bit the bullet. I had been a long time away, my time with Cork feels like a different world, but I figured if I don’t try, I might regret it, and I wanted the challenge.

“It’s been good, but it’s been hard. It’s tough having two small ones at home, it’s not very easy getting out when you’ve one of them hanging off you as you’ve to go to training! But at the same time, I feel that it’s the right thing to do, I hope that I’ll be a role model for my young daughter Lauren and that she’ll play camogie when she gets older.

“The girls have been very welcoming, I’ve never felt under pressure to perform or anything like that, I just go out and enjoy myself.”