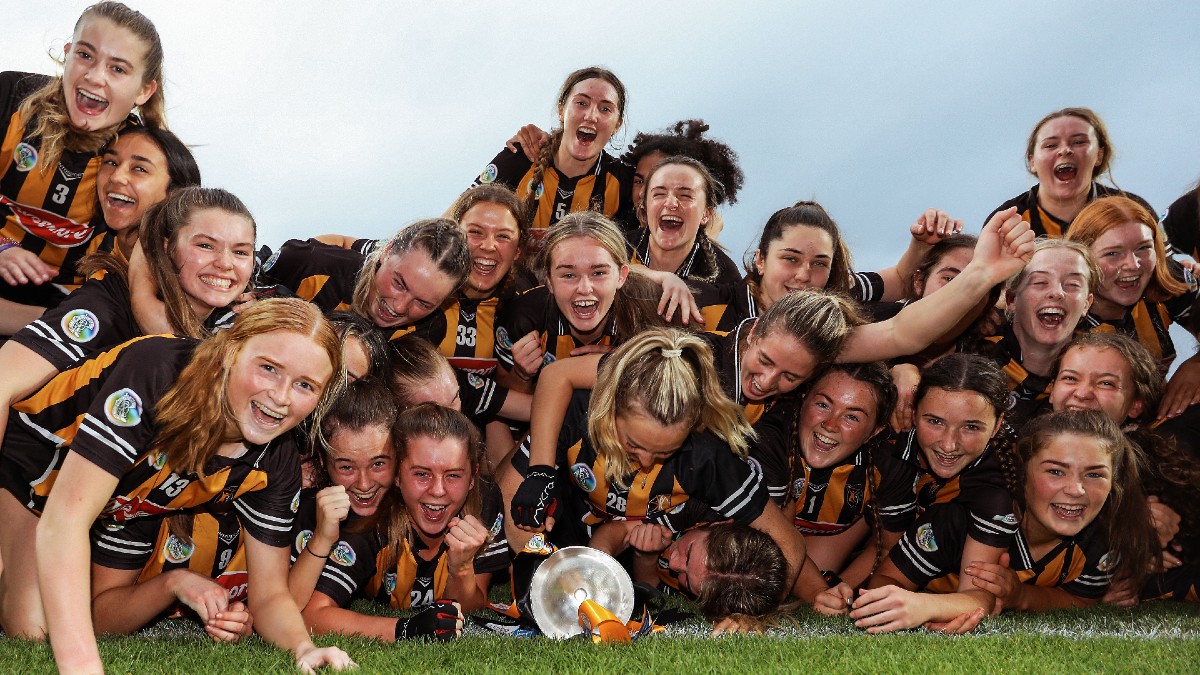 Kilkenny were crowned Tesco All-Ireland Minor A Camogie champions following a 2-12 to 0-12 victory over Cork in the All-Ireland final in LIT Gaelic Grounds, Limerick. The Leinster side played excellent throughout and were deserving victors, with Sarah Barcoe outstanding for the champions.

It was the Rebel County who had the better start, as two early Cork points put them into the ascendancy, with Orlaith Mullins and Aimee Morgan finding the target. Barcoe then slotted over Kilkenny’s first score, though it was quickly cancelled out by Ciara Golden’s effort.

Emma Shorthall’s effort split the uprights before Barcoe found the net for the game’s opening goal, with a neat finish to put Kilkenny ahead for the first time.

Morgan replied with a decent score for Cork as the Munster side trailed at the first water break, with Kilkenny holding a one-point lead after an exciting opening period.

Kilkenny dominated in the period from the water break to half-time, scoring three unanswered points with Amy Clifford (2) and Barcoe finding the target, as Mike Wall’s side held a 1-5 to 0-4 lead at the interval.

Emma Manogue opened the second half scoring for Kilkenny to stretch the gap to five, though Cork responded with four successive scores to reduce the deficit to the minimum. Claire Doheny and Meadhbh Ring swapped scores as Kilkenny held a 1-7 to 0-9 lead at the second half water break.

Whatever Wall said to his players at the water-break certainly had the required impact as Kilkenny were phenomenal in final quarter. They played like pure champions and it was a joy to watch as Asha McHardy, Amy Clifford, Barcoe and Shorthall added scores to restore Kilkenny’s five-point lead.

Shorthall’s 52nd minute goal all but ended the game as a contest, as it left eight between the sides heading into the final stages and Kilkenny were never going to relinquish that advantage.

Cork fought until the bitter end but it was to little avail as their opponents held out for a six point win.

Wall praised his side’s composure when Cork came back in the third quarter and the Kilkenny manager remarked how the message to his side at the second half water break was to keep calm and hold their shape.

“There were no major words. Our main thing was not to panic. When we went ahead we never went behind. I think that was the big thing for us. All we really said was keep doing what we’re doing. We knew we had the backs.

“They were playing a sweeper. That was their prerogative, but we knew if we held our shape we’d hold out,” the Kilkenny manager said.

This was Kilkenny’s first title at minor level since 2015, though they hold the record for the most All-Ireland minor titles won and this was their seventh success.

The Tesco All-Ireland Minor B Championship final will have to be replayed as Offaly and Antrim played out a draw, in Inniskeen Grattans GAA grounds. The full-time score was Offaly 0-13 Antrim 2-7 after an entertaining encounter and it was the Faithful who opened the scoring, courtesy of Chloe Fogarty.

Intermediate star, Áine Magill’s placed ball effort levelled proceedings, though it was Antrim who got the games first goal when Evanne Martin finished to the net with eight minutes on the clock.

The teams were tied at 1-1 to 0-4 at the first half water break and the Ulster side added the next three scores to give themselves the lead. Offaly responded well and the gap was at the minimum at the interval, as Antrim held a 1-4 to 0-6 lead.

The gap was still at two points heading into the closing stages, when Magill bet the goalkeeper with an excellent effort to put Antrim in front, which just two minutes of normal time remaining.

Sinead Hanamy turned out to be the hero of the day, as the Offaly player registered a draw with a very late point to force a replay at the end of an entertaining, competitive hour of camogie.