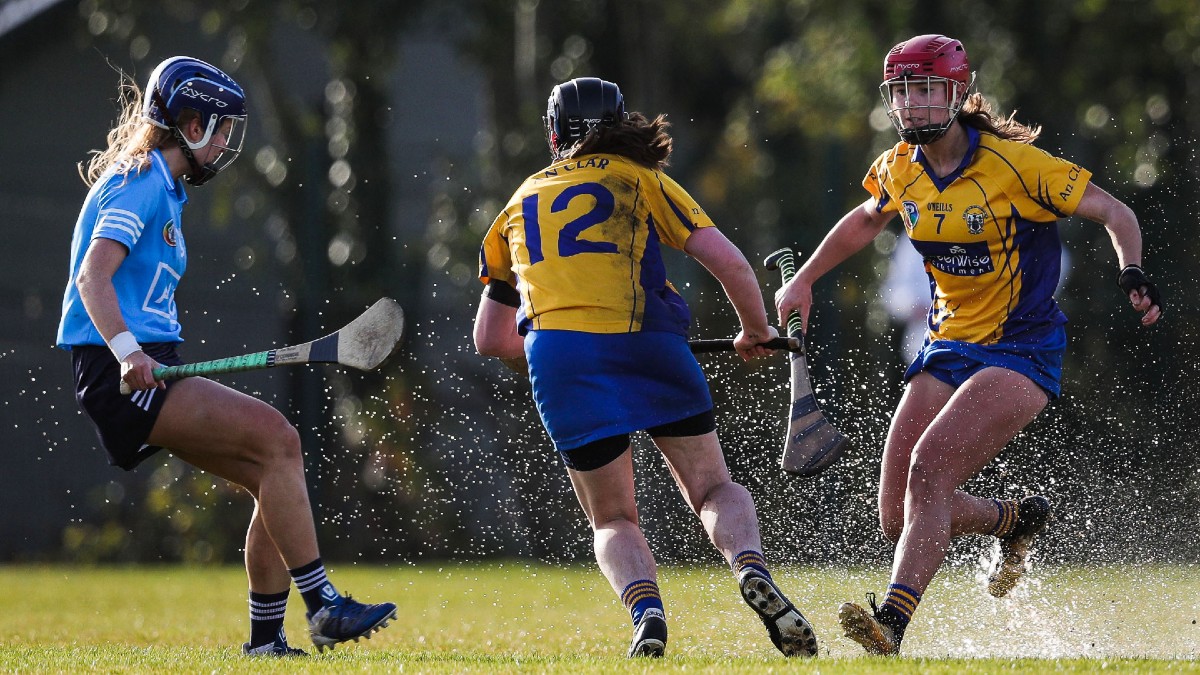 Clare secured a quarter-final berth in this year’s Liberty Insurance All-Ireland Senior Camogie Championship at Dublin’s expense as they prevailed by 11 points in Fr. McNamara Park this afternoon, 1-18 to 1-7.

It was knockout championship in all but name at the Ennis venue, following Tipperary’s win over Dublin in the previous round, and the tension was palpable right from the start.

In a tight opening half, neither side was able to build a commanding lead. Dublin’s Aisling Maher pointed a brace of frees, Chloe Morey slotted a ’45 between the posts and Eimear Kelly was on target as the first four scores of the game. Mairéad Scanlon edged Clare in front but Dublin wing back Niamh Gannon produced a real highlight reel moment when she pushed forward to fire a rousing score with 25 minutes gone, in a game where every score was hard earned.

The Dubs managed to move in front through Aisling Maher, but Clare’s hard running and support play in the forward line tested Dublin’s discipline in the tackle and they edged 0-6 to 0-4 in front at half time thanks to three scores without reply, two of them from dead ball points.

A commanding performance in the third quarter from the home side effectively settled the contest. Player of the match Niamh O’Dea led the way with a dominant display at centre back, anchoring a powerful defensive unit, and gradually they started to pull away with three more unanswered points.

Mairéad Scanlan scored from an acute angle in another moment of sheer quality for the Banner women and while Dublin dug their heels in, Ger O’Connor’s women struck a decisive blow in the 38th minute. Dublin failed to deal with an Orlaith Duggan delivery and it was Scanlan who reacted quickest, gathering the sliotar and firing it to the back of the net to move Clare eight points ahead.

Clare hit four more scores without reply, tightening their grip on the contest and suffocating the life out of Dublin at the same time, with very few attempts on Aisling Corbett’s goal. Corbett was eventually beaten in the 59th minute when Sinéad Wilde’s ground pull got the better of the Scariff-Ogonolloe custodian, but it was academic as Clare progressed to the All-Ireland quarter finals, putting their defeat to Tipperary behind them.

After 237 days without a competitive game, Cork returned to action exactly as they would have wished, overcoming Wexford by 3-12 to 1-8. Wexford will feel that the losing margin doesn’t tell the whole story, as two late Cork goals added gloss to the victory.

Paudie Murray’s Cork side started slowly with the sides level at two points apiece in the early stages. However, the 2018 All-Ireland winners began to settle in to the contest, with Orla Cronin’s accuracy from frees helping Cork establish a lead. Amy Connor found the net in the opening half as she struck 1-2 in the first 30 minutes of action, with Cronin’s five first half frees contributing to a 1-8 to 0-6 half-time lead.

Wexford managed to hit back with a goal in the early stages of the second half to cut their arrears to two points. With Ciara O’Connor excelling at centre back, they continued to frustrate their opponents with Cork only leading by three at the water break.

However, Cork summoned all their experience and a second Amy O’Connor goal sealed the victory. Substitute Saoirse McCarthy added a third as Cork found the scores they needed to set up a top of the table clash against Galway next weekend.