CAMOGIE: Connolly hails fresh blood that has given Antrim “a new lease of life” 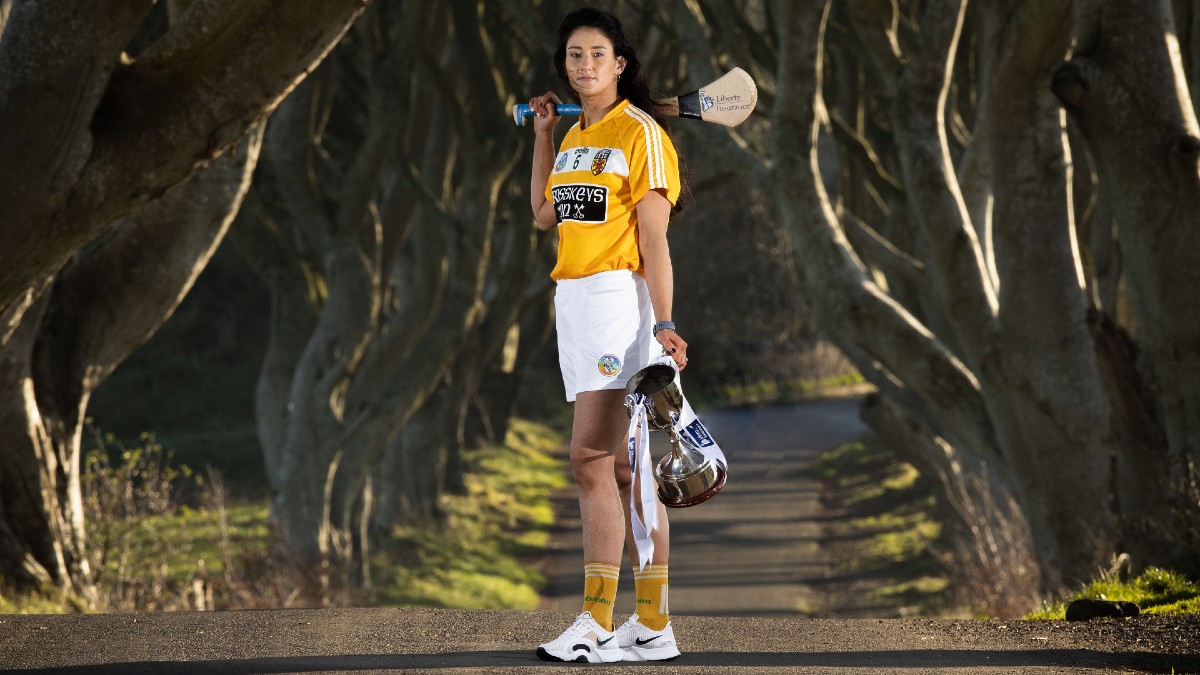 Maeve Connolly has had a taste of winning an All-Ireland at adult level with Antrim, as a panellist when the Jane Adams-inspired squad, in which the young Loughgiel Shamrocks defender was a member of, defeated Waterford in a replay to claim the Premier Junior title.

A decade later, only Connolly and Chloe Drain remain, though Orla O’Hara had joined the panel 12 months later when they lost out to Wexford in the Intermediate decider.

Now, in a 2020 that will never be forgotten, Antrim are resurgent, but facing very tough opposition in old rivals Down with that Liberty Insurance All-Ireland Intermediate Camogie Championship title up for grabs in the double-header with the Premier Junior decider at Kingspan Breffni on Saturday.

“That was the Jane Adams-led team,” recalls Connolly. “The teams are the complete polar opposite because at the minute it’s the younger girls dominating the team. You have the likes of Maeve Kelly and Róisín McCormick that have been really successful at juvenile level. They’ve brought a completely new energy.

“It’s just given Antrim the lease of life they needed to get back to the level they were in 2010 and 2011, because the years in between, there was nothing. There was no real success.”

There was patience and fortitude though, as the underage seeds were sown and tended and are now beginning to bear fruit.

“A lot of the girls on the team at the minute went through from Under 14 playing at the county right through the Minor, and won All-Ireland titles at Under 16 level and Minor. Them coming through has brought a new energy to the county. In Antrim, for the past number of years, we’ve struggled even to have numbers to field in games, to go out and play matches.

“To see those players coming through and the blend with more experienced players, the combination of the two seems to be working really well. For the first year in quite a while, things have been going really good. The numbers we’re getting at training, there would be 26, 27 girls on the panel now. That’s what you need to be doing well at county level; 16 or 17 players isn’t going to cut it.

“This is the first time in a long time we have a big panel made up of the best players available.”

Conscious that the time had come to strike at adult level once more with McCormick, Kelly and their contemporaries coming through, the county board looked to appoint a serious management set-up. In making the job attractive to Paul McKillen, Jim McKernan and Elaine Dowds, they delivered on that score.

“I don’t think a lot of the girls that are playing would have signed up to do it if they didn’t have the respect for the management team. So I knew when they were appointed good things were going to happen. They have all of our respect and just made things get better and better as we went along.”

With technology teacher Connolly as skipper, they go into the clash with Down with all the systems in working order, unbeaten throughout the year and scoring 1-16 in the four-point defeat of Meath in the first round confirmed their readiness to contend.

“We’re just happy to be there the way the year worked. We were always taking one step at the time and every advancement that we made it was just another advantage to us. I wouldn’t have thought at the start of the year that we’d be lining out playing in an All-Ireland Final. Obviously, we’re delighted to be in that position but if you’d told me at the start of the year we’d have been there, I wouldn’t have believed it.

“New mentors came in this year, and we were sort of thinking two, three years down the line. Things just went our way this far.

“We started the year very well in the League with a couple of good wins over Dublin and Tipperary and then the Lockdown kicked on. But I think maybe because we started off strong in those matches, a lot of the girls took encouragement from it and all the girls were mad keen to get back. And it brought on a couple of the new girls too that wanted to get involved.”

The absolute priority is to make sure that the progress is sustained.

“The managers said at the start of the year that this was a building process, this wasn’t some one-hit wonder, this wasn’t one year when we would try and do this.

“No good team goes out just for one year. Great teams are formed over x number of years and great teams win these competitions over x number of years. So obviously, whoever wins, it is going to be a great achievement but why not further that achievement and do something even better? And that is keeping up that level, keeping up that standard which players need to buy into again.

“I would like, and I really do think that we have built up a good enough relationship, a good enough determination, a good enough bond between the team at the minute that those girls will buy in no matter what the result is, to go a step further to try and achieve even more, to keep building and to go again.”

When you’re in a Final though, you want to win and on a line of form through Meath, who Down accounted for in their Semi-Final, while Antrim were much too strong for Laois, there should not be much between them.

“Down are a very, very experienced team. Unlike ourselves, Down have been knocking on the door for a good number of years now. They’re a hard-knit kind of team. They’re well gelled together. They’ve been playing with each other for years. We have a lot of respect for them. They’re a great team.”