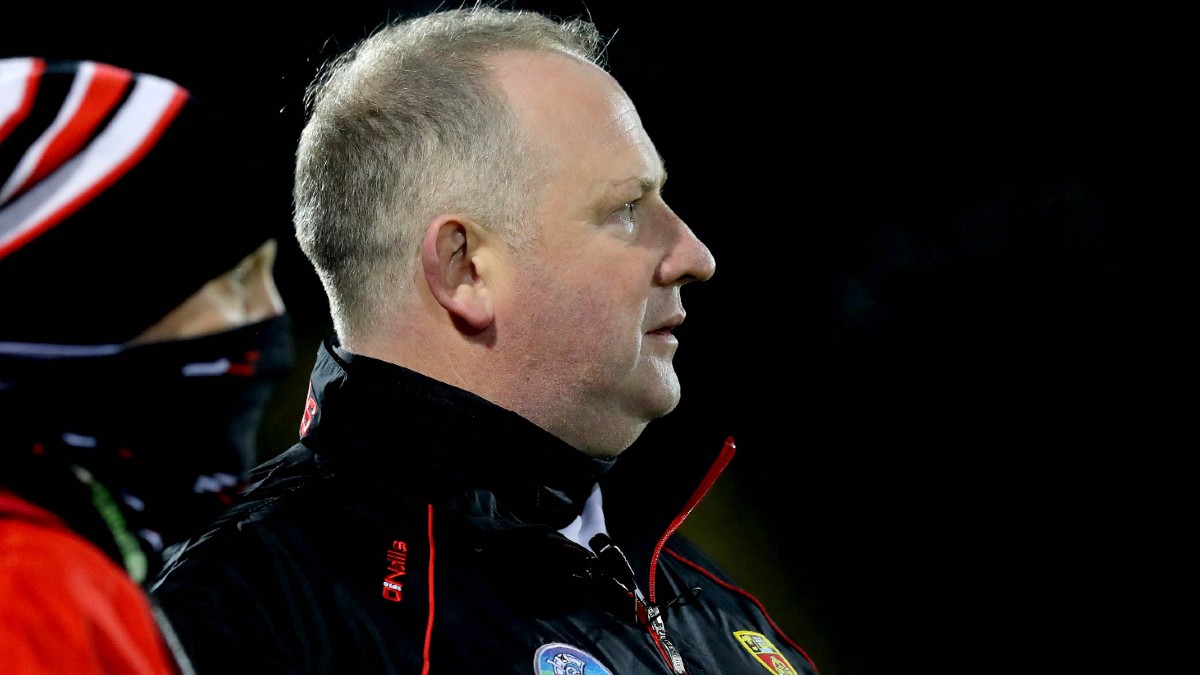 Down manager Derek Dunne maintains that his charges are ready to make the step up to Senior competition after a power-packed second-half display finally saw off a youthfully exuberant Antrim side with a very bright future by 4-16 to 2-10 in the Liberty Insurance All-Ireland Intermediate Camogie Final at Kingspan Breffni on Saturday.

A native of Laois, Dunne was persuaded by his partner and Down talisman, Fionnuala Carr to link up with the side as a coach in 2018. They reached the All-Ireland that season, having looked initially as if they might struggle to field a team.

Subsequent champions Westmeath defeated them by a point at the penultimate hurdle last year but Dunne took over the managerial reins this year and implemented a new, more considered style of play. They had a look of a side that would not be denied this time around once activity resumed.

“It’s unbelievable,” said a smiling Dunne. “It was a difficult year, with everything that went on and girls travelling on their own. We started on the 12th of December, today is the 5th, and to win the All-Ireland – that makes up for a lot.”

Niamh Mallon and Sara Louise Graffin contributed 3-5 between them, while co-captains Carr and Karen McMullan excelled in the half-back line.

Dunne emphasised the greater balance in this unit than in past iterations however, and that was critical in terms of responding to the concession of a first-minute goal to Róisín McCormick and another rasper by fellow teenager Maeve Kelly early in the second half.

Lauren Clarke struck for Down’s fourth major in the sixth minute of injury time and it was the industry of the less heralded members of the team that Dunne looked to highlight.

“You look in every other year we get into a Final or a Semi-Final, and your big players, your Sara Louises, your Niamh Mallons; they get really tightly marked and knocked around a bit like there today. And then you’d the likes of Sorcha McCartan sticking her head up. She kept us in the game for 10 minutes. And then your bigger players will push on.

“I think we went on a bit of a whirlwind in 2018. I just came in to help out to be honest with you. That was all I was doing and we ended up winning Ulster and getting to an All-Ireland Final.

“Last year, was a little bit different. I came in more or less helping out. The county board came to me (about this year) and I said I’d give it one more shot. Bring in the backroom team I want, I wanted to play to a system and change it. The girls bought into it and you see the rewards of it. They done the work. We have a totally different game to what any other team plays now.”

And it is this development that Dunne believes would allow Down to be competitive with a number of teams in the Senior grade if the Camogie Association were to approve any application to be promoted.

“I think they should. There’s only 11 teams in Senior. I’m only talking off the cuff after winning but I think the county board should be looking for those girls to go on and compete in the Senior next year.

“There’s four or five they’d compete with well. There’s a second team in the background and they’re developing well with them.

“I think we’re an awful lot better than we were last year and you look at what Westmeath done, (beating Limerick in the Senior Championship this year), so without doubt, I think we’d compete with a good few of them up there.”