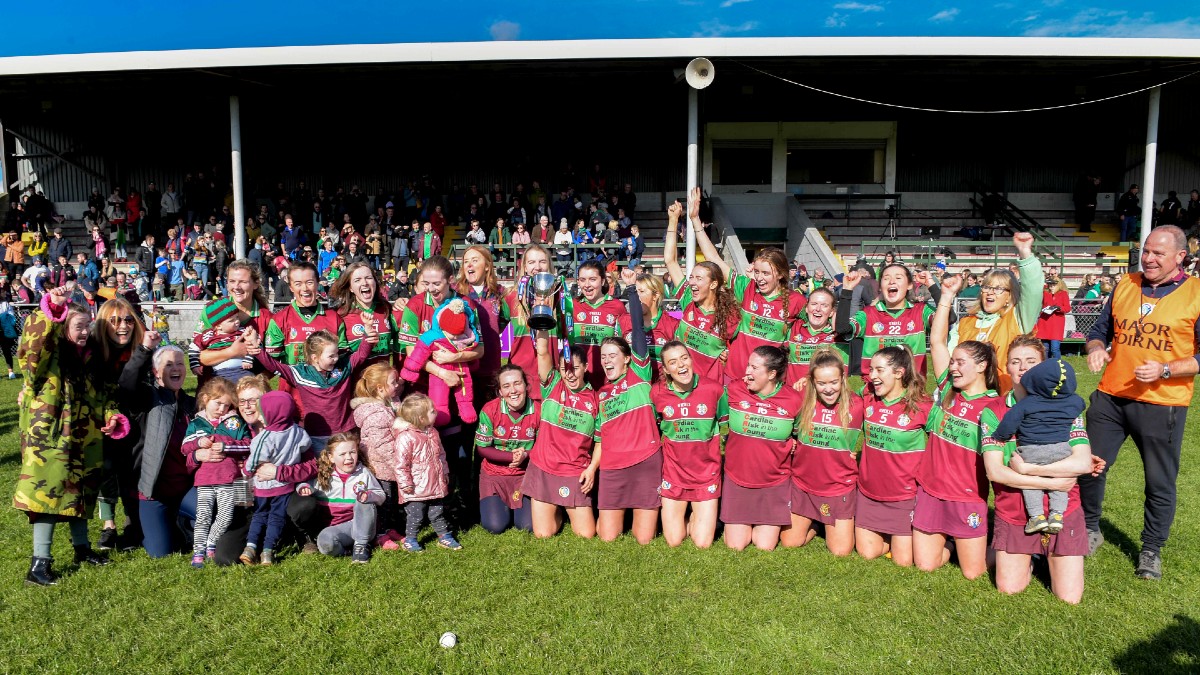 A goal from Ireland hockey captain Katie Mullan and a second-half masterclass by Gráinne Holmes were among the key features as Eoghan Rua edged out Clanmaurice in a thrilling AIB All-Ireland junior A club camogie final at the O’Raghalllaigh grounds in Drogheda.

Holmes rolled back the years as she followed an economic opening period, in which she slotted two neat points, with a superlative performance that yielded five more and reminded us of the talent she was in her pomp for club and county before serious injury threatened her career.

Mullan’s 24th minute goal was a crucial score, as it came in a period when her side was playing second fiddle and actually enabled them to go in at the break leading by 1-4 to 0-6.

Clanmaurice wrestled back the advantage briefly at the beginning of the second half but in the final quarter, it was all about Eoghan Rua, as Brendan McLernan’s charges took over completely, finding more space and gaining returns with their pace and direct running.

They conceded an injury-time goal to the magnificent Jackie Horgan, who finished with a goal and six, but had done enough to claim the silverware.

Clanmaurice, who were also runners-up in the 2020 championship, flew out of the traps with the opening two points from Horgan and Patrice Diggin but Eoghan Rua responded with scores from Shauna Doherty and Rosanna McAleese.

It was at this juncture that Diggin and Kate Lynch began to exert control around the middle and though Méabh Duffy, captain when Eoghan Rua completed the All-Ireland two-in-a-row in 2011 and 2012 and who gave birth to her daughter towards the end of last year, was prominent at centre-back, such was the flow in her direction that Horgan became a real handful.

The full-forward planted a free from just inside the 45 but tight to the sideline and then slotted a super score from play.

Mullan’s goal was vital, as she collected possession around 25m out. She certainly took her full complement of steps before getting the sliotar on her hurley and speeding clear of the cover, planting a low shot off her left to give Eoghan Rua the lead.

Clanmaurice were still in charge around the field and Lynch and Horgan split the posts but those scores came either side of a delightful brace by Holmes, who is a sister of Duffy – they will be known to most camogie followers as the McGoldrick siblings, from the glory days of Derry camogie. The second was a real peach that kept Eoghan Rua’s noses in front.

The Kerry women are regulars at this level and are former champions so it was no surprise when they resumed with a clear intention to make their dominance tell on the scoreboard. Diggin had a point within seconds of the throw-in and raised another white flag and they were in front.

But, almost as if a flick was switched, Eoghan Rua took over around the middle. If the ball did go towards their defence, the ageless Grace McMullan, Duffy and skipper Éilís McNamee excelled. And then, the forwards caused carnage.

Doherty and Mullan, with a wonderful individual effort, shot points but it was the Holmes Show in the final quarter especially, after Doherty and Horgan had exchanged minors to leave Mike Enright’s still leading by one.

Holmes equalised from her first scoreable free on the three-quarter mark and she and Eoghan Rua never looked back as that was the signal for complete control, as they hit six points on the bounce to move five clear. The last of those was outrageous in its excellence, on the run over 40m out and almost in the covered stand, raising a deafening roar.

Horgan took a point from an easy free and then, with time almost gone, pinched a goal though McMullan almost saved it. There was time for one more attack, but it was Eoghan Rua’s, Holmes proving she was human when missing from a free.

That was the final act though and the Derry Girls’ celebrations could begin.