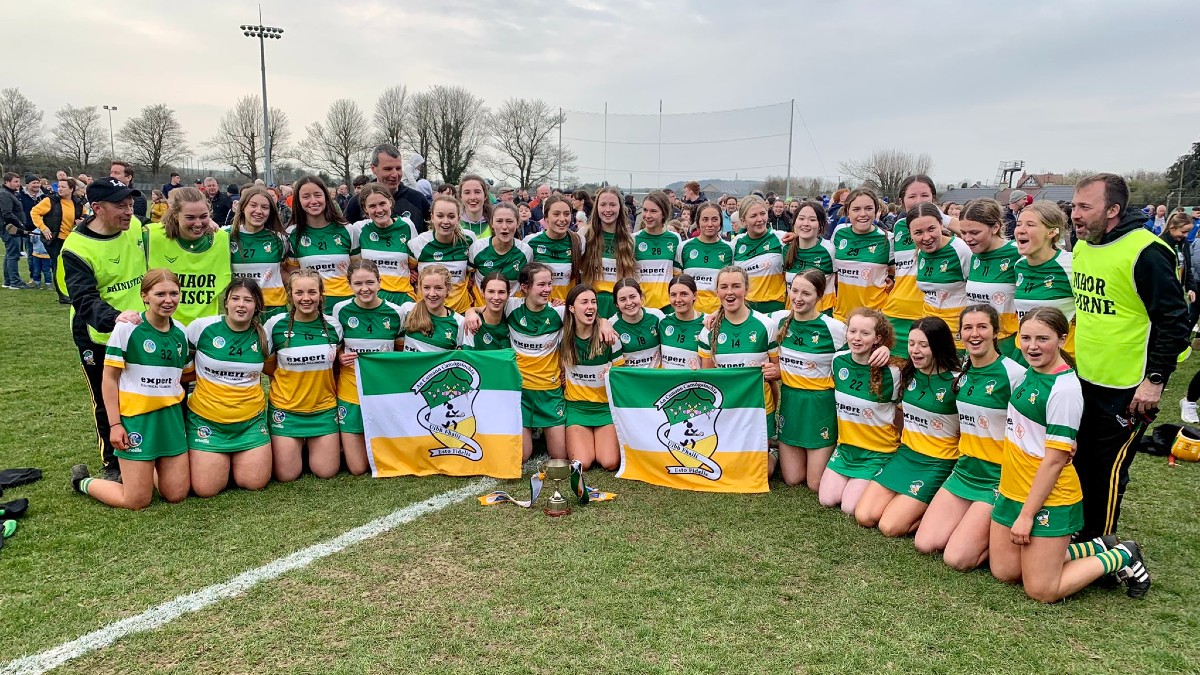 Two first-half goals from Molly Hogan were the significant scores as Offaly came out on top of their midlands derby with Laois to win the Tesco All-Ireland minor B camogie title by 2-10 to 1-12 at Round Towers in Kildare town.

Laois contributed fully to a wonderful encounter. Captain, Gráinne Delaney scored an early point for them and Susie Delaney shot them 0-4 to 0-3 ahead before Hogan grabbed her first goal from the resultant puckout. After good work out of defence by graceful midfielder Labhaoise Glynn, the sliotar was sent into the mixer where Hogan plucked it out of the sky, ran across the posts and drilled a low shot back into the far corner.

Within a couple of minutes, Hogan had her second, Glynn again doing well to win possession and after making good ground, delivering to Faye Mulrooney. The full-forward hand-passed to her fellow attacker, who rattled the net for a second time.

That appeared to give Leonard Deane’s side control but Delaney brought her tally to five points before Eimear Hassett goaled from a penalty in the fifth minute of injury time to make it 2-4 to 1-6 at half-time.

Laois continued that momentum into the second half with the first four points courtesy of the two Delaneys but Hogan, Sarah Freeman and Róisín Kinsella hit back with vital points. Kinsella, shot her sixth point, and Mulrooney edged Offaly two ahead and though Susie Delaney converted a free for her ninth point, Niall Cuddy’s charges could not find they equaliser.

Wicklow put the C final to bed early on against Mayo at the Tang GAA grounds in Westmeath, scoring a goal after just 31 seconds and giving themselves enough of a cushion when facing the wind in the second half to prevail by 4-4 to 0-6.

Mayo had beaten Wicklow in last year’s semi-final but by the time they got off the mark in the 30th minute, thanks to Fionnuala McLoughlin, Wicklow had 3-4 on the board and that was how it stood at the interval.

Burke then supplied Wicklow’s fourth major and it was a critical score into the wind. They battened down the hatches thereafter, with Faye Corrigan and Tia Cullen monumental. Niamh Mooney shot four points for Mayo and McLoughlin another but they needed goals and with Wicklow resolute, they never really looked like coming.

Meanwhile, the A final will be contested by Cork and Galway as a result of their victories over Tipperary and Kilkenny in Edenderry and Thomastown respectively.

Aoife Healy came up with a stupendous individual score to snatch the verdict by 1-7 to 0-9 for the Rebels, who had fallen behind late on and needed a point from Orlaith Cahalane to draw level. Cahalane finished with 1-3, the goal arriving after 16 minutes.

Tipp had started well with the first two points but were not rocked on their heels too long by the Cahalane major. Anna Fahie and Celine Guinan were among the scorers as the Premiers went in at the break leading by 0-6 to 1-2. When Aoife Dwyer and Guinan pointed, it looked like they would advance but Cahalane and then Healy pounced to deny them.

Galway were 0-14 to 2-3 winners over Kilkenny, Ciara Hickey, Niamh McInerney and Alannah Fahy hitting good points for the westerners in the second half, after Kilkenny had stormed out of the traps with goals by Emma Shortall and Amy Brennan.

In the Minor C Shield, Westmeath defeated Kerry 1-11 to 0-9 and they will play Roscommon, who overcame the Down challenge by 4-10 to 0-6.