CAMOGIE: “I got two goals against Offaly… there’s more for me to work on there because I didn’t take them well at all” – Galway’s Niamh Hanniffy 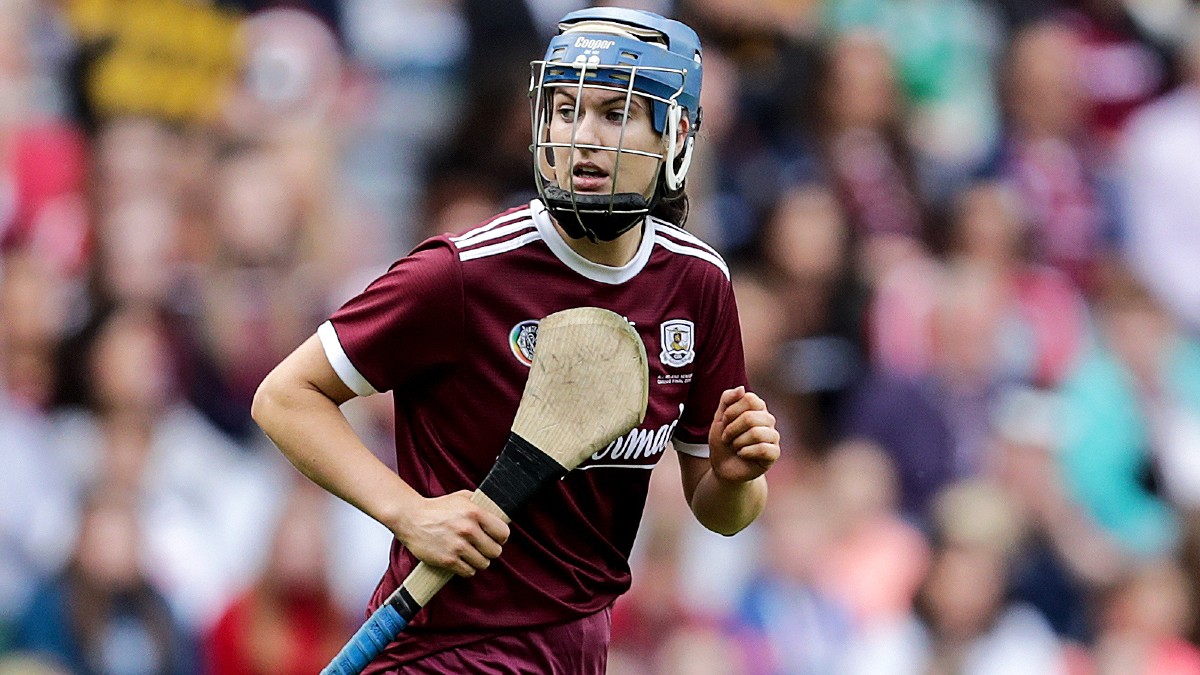 “You know this is Niamh Hanniffy now, and not Niamh Kilkenny? We’re clear on that from the get-go?”

She does a fine line of self-effacement, and it’s not affected either.

It is true, that in a squad boasting some of the finest talents Camogie has ever seen, Niamh Hanniffy flies under the radar.

You know within the dressing room however, her key role as Galway became Liberty Insurance All-Ireland Senior Championship victors last September will always be appreciated.

Capable of winning primary possession, the Oranmore/Maree attacker has a direct style that draws defenders and creates space for her colleagues. There is invariably physical punishment that comes with such traits but Hanniffy is happy to take one and more for the team.

The thing is though, and this is what makes her lower profile surprising, Hanniffy’s name appears on the score sheet regularly, particularly in the goals column.

The 24-year-old may not be totting up green flags at the rate of her clubmate Ailish O’Reilly, but with club, college and county, she has a record that stands up to the most robust of investigations.

A first-half goalscorer in the All-Ireland Final defeat of Kilkenny, Hanniffy grabbed an early brace against Offaly last weekend to help put that tie to bed, having also rattled the net in the first match of the defence of their title against Wexford a fortnight before that.

Any attempts to offer praise are swatted away, in much the same fashion as the tall, powerful forward sends defenders skittling out of her path when embarking on one of those trademark sallies.

“It’s all about work rate and giving it to the player in a better position. If I was to look individually at it and say I got two goals against Offaly, well there’s more for me to work on there because I didn’t take them well at all. I hit them straight at the goalie and I was probably lucky with the weather conditions that they fell in.

“So it was about Ailish and Orlaith (McGrath)’s work rate, giving the ball, and I have to work on my shooting.”

A science teacher at Presentation College in Headford, Hanniffy attests to the importance of getting back into the classroom for both teachers and students.

“We’re doing the best we can and just sticking together. I feel very safe in school. There’s no-one I’d be in full contact to. We’ve spread ourselves out as much as we can. The kids are wearing masks and we’re wearing masks.

“There are times there you’re like, ‘That’s a really good answer but who said that?’ That’s probably the toughest part on the kids, asking them to repeat themselves, but they’re great, they’re very positive and are just happy to be back in school.

Her area of expertise means that she is intrigued by COVID-19.

“I would be alright, I’d be trying to figure out how it worked and how it’s spreading, trying to apply a bit of the science background, but I think now it would be easier to leave it to the experts and not be thinking about it as much. Distraction is key and once you’re trying to do the right thing, the rest will look after itself.”

There is not better distraction than playing Camogie. The first lockdown gave her a greater appreciation for training collectively, as she endured the “torture” of carrying out Robbie Lane’s programme at home.

“It was a great insight to what life will be like after Camogie. You do hear people saying, ‘Enjoy it while you’re in it. Treasure it. It’s the best time.’ Obviously, I don’t like running and running to be fit, and elements of training are tough but I still go every evening.

“So it gave me the chance to realise it’s the friendship, the camaraderie, the craic, the support that we get from each other and learn from each other. It’s a huge outlet for your mental health, a chance to clear the head and express yourself in a completely different way.

“Lockdown gave me the time to reflect and I’m definitely appreciating it more. It’s only a game and it could end. So I’m not going to think too far ahead to a next game. It could be gone and I’m glad to just have the next game.”

And what a “next game”, with Cork, like Galway, already qualified from Group 1 for the knockout stages. A draw or better will see Galway top the group and move directly to the last four. Cork need to win.

The teams provided one of the greatest tussles in Camogie history in last year’s Semi-Final at LIT Gaelic Grounds, the Tribeswomen coming out on top by a point after a game of such rabid, claustrophobic, bruising intensity, as well as astounding moments of surreal mastery of hurley and sliotar, that even the viewer was exhausted at the final whistle.

As a showcase of Camogie and the elite level conditioning of the athletes participating, there have been few better.

“Playing in it and looking back at it, it’s probably one of the games we will take most from last year, including the All-Ireland. It had the physicality, it had the skill. It was that one-chance hurling where you’ve no time.

“That’s the type of game you love to play in but it doesn’t turn out like that a lot and you often get a stop-start game with frees. That game was everything you dreamed of playing.

Now there’s a thought to whet the appetite.