CAMOGIE: “I think we’re still kind of playing maybe a small bit within ourselves. We know the potential is there” – Aoife Donohue 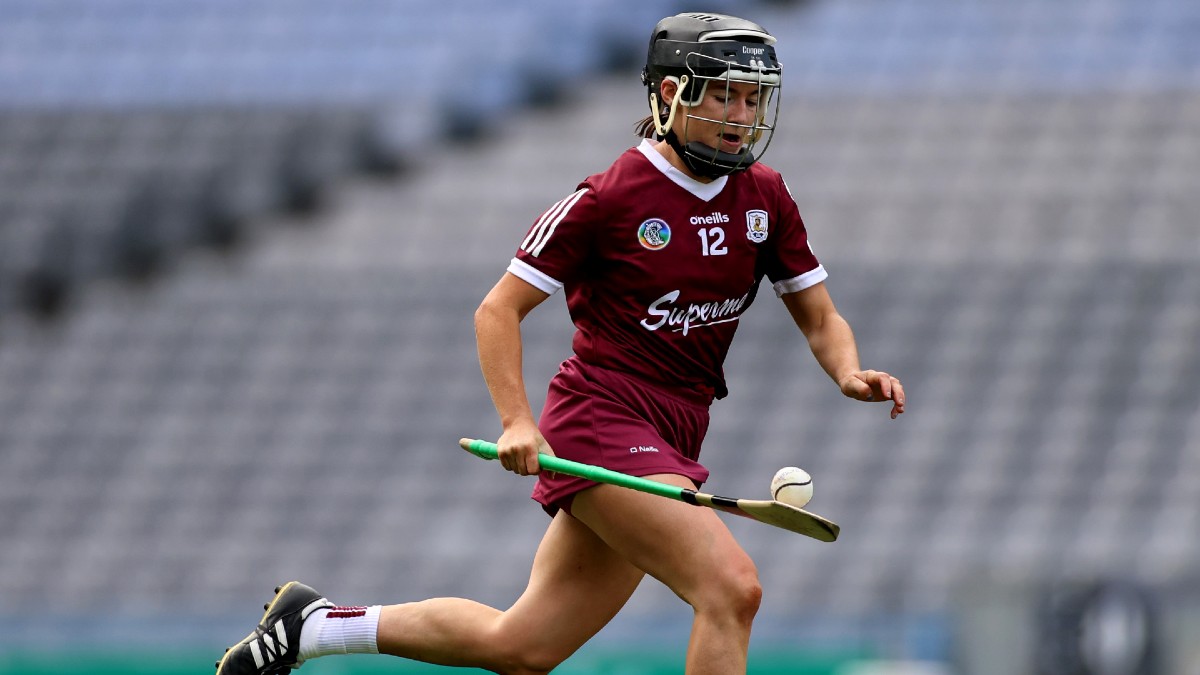 Aoife Donohue chuckles when asked to recall that exchange between her and Ashling Thompson at the end of the 2017 All-Ireland semi-final.

The flying machine from Mullagh was distraught as a tremendous second-half rally by Galway in which she led the charge just fell short.

It was the latest in a run of near-misses since the triumph of 2013, when Donohue joined the panel for the first time and secured a memorable double on the pitch with the intermediates. That seemed a long way away and it wasn’t just the pundits who wondered if they would ever get over the line.

Thompson, who was monumental that same day, offered consolation and it was an image that captured considerable attention, the tall, powerful midfielder wrapping the diminutive dynamo in an embrace of genuine empathy.

Thompson wasn’t in the Cork team when Galway finally came out the right side of a battle in the 2019 semi-final – perhaps the most fiercely fought and exhausting-to-watch encounter of the modern era – and the Tribeswomen finally claimed their third title.

Now, 25 years after Imelda Hobbins and co got their hands on the O’Duffy Cup for the first time, also against the Rebels, they have a chance to make it four but Thompson and Cork stand in their way.

The kindness of the Milford powerhouse hasn’t been forgotten, and the duo bonded on the subsequent All-Star trip to Madrid but they are almost sure to collide at some stage in today’s All-Ireland final (Live on RTÉ 2 – 4.15pm) and in the midst of that battle, empathy won’t be the only victim.

“Oh God yeah. I nearly forgot about that one,” Donohue says. “It feels so long ago.

“I was young enough coming up along. There was a time there where we were, on the panel or playing then, we were a couple of years not getting past the semi-final stage. I felt that was never going to come.

“I would be fairly familiar with Ashling. We would have been on All-Star trips. I would know her. She came up to me when the final whistle went and said some nice words. Yeah, that was nice of her.”

Donohue has been returned to the attack by Cathal Murray this year to excellent effect, after the Galway manager was struck with the magnificent brainwave of switching her to midfield in 2019, to utilise her hunger for work and elite speed in the more open spaces. It yielded a third All-Star, as well as the player of the League award.

She can still carry out a similar role from the half-forward line while presenting more of a scoring through, though a switch into the full proved definitive in the extra time League semi-final defeat of Cork earlier this season, something the Leesiders may be expecting as a result at some point today.

“I would have always played in the forwards coming all the way up along. I would always be telling Cathal that I was a forward. But I am just happy to play anywhere. I don’t really mind where I go. It’s not really about me it’s about the team.

“Cathal seemed to stick with me at wing-forward this year. But essentially, I do go between the two anyway. It doesn’t make much difference to me. But yeah, I am enjoying being back in the forwards alright this year.”

Donohue’s thirst for work and training is legendary and she would have always been at club training when inter-county commitments allowed, even if she wasn’t allowed tog out. This year, she has fought to be allowed be involved more, for her love of Mullagh is undying and her club championship medal is more prized than the All-Ireland ones.

“I would be a big club player alright. I think your club is where you start and it’s where you finish. It’s a bit difficult this year, the girls are training the same evenings we are training with the county. I don’t get up as much as I would like

“But we had a break there after the League final. We had a league game with the club on the Monday or Tuesday. I had a row with Cathal to let me go out and play a few minutes in that. I was only left on for the 30, they wouldn’t let me back on again after that. But your club is your club.

“Madge Kennedy used to be sending me home alright because I would always be down there. You would only love to be going and seeing the girls and spending time with them. You would be pucking around yourself. And any time you can get on the pitch it can only improve your own game as well.

“I always looked up to Sinéad Cahalan in the club. When I first started playing camogie with Galway it would have been her and Anne Marie Hayes that would be driving up to training and they would be bringing me. She kind of brought me along the way and made sure I would stay at the camogie.

“When you are at that age you can go one way or the other way. She was very good to me. Definitely a player that I’d still admire and look up to. And definitely probably a player that is one of the reasons that I’m where I am today playing with Galway.”

It is a lesson the 28-year-old hasn’t forgotten, as she tries to offer a good example. She believes the schools have an important role as well as the clubs in terms of coaching and keeping young girls interested.

“The drop-off rates, especially in girls’ sports, it’s high. And if you can get girls that they look up to, that play camogie with Galway, if you have them within the clubs, even to use your experience with camogie to get involved in coaching. Particularly in the clubs with the younger girls. They do look up to players playing at the top of their game. I think it’s really, really important. In the schools it’s important as well, that you have players within the schools that will take on teams and get involved. And I think you have to have that as well to keep young girls playing sport.”

She is joined at Claregalway College by the captain of the victorious 2013 outfit, Lorraine Ryan so there is no shortage of expertise there, though she is concerned about the impact of the loss of so much underage competition due to Covid-19.

In her youth, it was soccer that floated Donohue’s boat. She won a schoolboys’ medal at U11 but Kennedy saw potential and had her converted by the following year.

“I used to play a bit of soccer yeah, I used to play with Kiltormer and the club went then. That was me done then. I’m sorry I didn’t stick with it. I came back to Mullagh and I’m with the camogie ever since. But I would be a big soccer fan alright.”

“I am a United fan now so I am happy Ronaldo is back.”

There is a feeling that Galway have not found the levels that brought them to glory two years ago too often since and Donohue doesn’t demur.

“I think we’re still kind of playing maybe a small bit within ourselves. We know the potential is there. It’s just, to all click like 2019, I think everything went right then. Everyone was flying. So probably still a small bit playing within ourselves at times, especially up front.

“I suppose it comes down to the opposition you are playing as well at times as well. You are playing quality teams, top quality defenders. It’s hard to break teams down. You are never going to go out and have six forwards absolutely firing. I think it’s just being a small bit more clinical up front when we do get our chances just taking them.”

Goal chances were spurned against Tipperary that will have to be taken against Cork but there is reason to believe that they can find another gear if needed. The response to Catherine Finnerty’s early dismissal in the final group game against Kilkenny was notable in that they chiselled out a tremendous victory against the defending champions, who had beaten them in the League final.

“I think the one thing that I took away from the game in Callan was the workrate of everyone. We hunted in packs. We would have always prided ourselves and built our team around working really hard. If you weren’t working hard, you are not going to be on the team. That day when we did go down to 14, just before the water break, our workrate won it for us. I think it was probably the first glimpse of that hunger that was there in 2019 leaving Callan that day. That was what was most satisfying. That hunger and that drive was there. Ultimately the sending off woke us up a small bit.”

A repeat could spell trouble for Cork, though in truth, no one is expecting anything but for this to go down to the wire. After losing last year’s December decider, Galway feel it’s their turn.

Maybe this time, it will be Donohue doing the comforting.