Camogie in COVID “a godsend” for teacher and Down hero McMullan 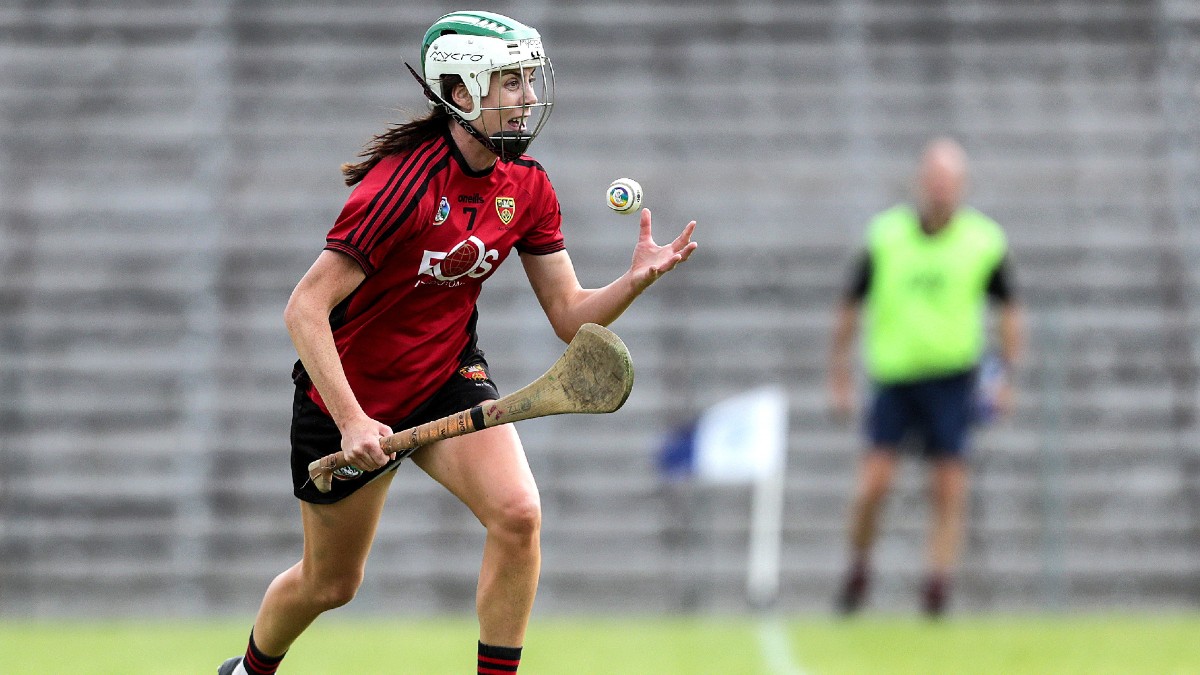 She was a long time gone but the game never left her. Home couldn’t be extracted from the DNA.

So Karen McMullan came back. Ironically, her job as PE teacher at St. Mary’s Secondary School in Glasnevin has taken the Liatroim Fontenoys star away once more, but that hurdle is a mere trifling to a 33-year-old heart and soul that is wedded to the red and black.

The reward for what has often been a thrice-weekly commute is a place for Down in the Liberty Insurance All-Ireland Intermediate Camogie Championship Final against old rivals Antrim, at 3.45pm in Kingspan Breffni tomorrow.

Croke Park would have suited better, but headquarters is unavailable and McMullan insists that the venue is not a consideration. The players know how fortunate they are.

“We’re well aware there’s people out there that have lost lives, people that aren’t working, have lost their livelihoods for reasons outside of their control,” reasons McMullan. “So we have qualified for an All-Ireland Final and are going to try do our best to win.

“Of course it’s a disappointment not being in Croke Park but it’s something we can’t control and we knew about it months ago. It’s an All-Ireland Final and we’re absolutely privileged and honoured to be there to represent our county.”

She probably thought she had consigned that part of her life to history when after completing a Junior Camogie and Intermediate ladies’ football double with Down, McMullan decided to expand her horizons.

“I’d been on the Senior (Camogie) team since I was 17. Previous to the 2014 Final, we’d got beaten in the past two Junior Finals at Croke Park. At the third time we finally got it and the football too so after that, in 2015, I decided to take a career break, to go off and travel.

“I thought I might take a break from both sports but the GAA follows you and I ended up playing for Michael Cusacks in Sydney!

“I was always a home bird. I’d say my family didn’t think I’d last as long as I did. Initially I was going for a year but that turned into two, then three, then three and a half. Family is a big thing for me. My sister had a few children and I missed being at home. I’d done everything I wanted to do in Australia; I’d seen different parts of the world. Home is always home and I knew I would always come back to where I would grow up.

“So I watched the Final in 2018 from Sydney. I didn’t think I’d be back in the county team. When I came back, I got a phone call to ask about going back for the Ulster Championship last year. So I said I’d see how it would go but I slotted in as if I’d never been away. I’ve been loving it. I suppose you’d call it a semi-retirement in Australia but I’m enjoying being back with the girls.”

Being based in Dublin has made the return less straightforward but she removes the negativity. Indeed, the requirements of county involvement now have showcased for her the mind-boggling advances in Camogie during her four-season absence.

“When I think back to 2014, when I went to Australia and when I came back, the difference in preparation – strength and conditioning, your nutrition, analysis – it just went completely up a different level, which is brilliant for the sport itself but its really time-consuming. I’m just lucky the school have been fantastic with me in terms of going up the road for training.

“It is hard in terms of just doing that commute but I wouldn’t have it any other way. It’s my choice to do it. I’m enjoying it. No matter where the training would be, I would be up the road and coming back down and hopefully continuing to play as well.

“The management have been brilliant. If they feel I don’t need to come up both the Tuesday and Thursday, they say to stay in Dublin, find a ball wall and do a bit of a skills session. So that’s great.”

Far from being a chore, Camogie has been an invaluable pressure valve, particularly when teaching in the current climate.

“It’s been very difficult. Camogie has been a saviour for me in terms of having an opportunity not to be worried about the school or stressed about COVID. It’s been a great outlet. Anyone who’s playing in a team at the minute, I’d say everyone is saying the same. It’s a chance to switch off from the normality of the minute. It’s been a godsend.

“And having a goal and focus every week, has got us through September, November and now December. It’s been great.”

That first season ended in an agonising one-point defeat by Westmeath but seeing the Lakesiders take Limerick’s scalp in the Senior Championship this term was a boost.

“It took a long while for all of us to get over it. Its difficult circumstances to lose a Semi-Final by a point and then Westmeath went on to win it. On the day, we went away with a lot of regrets as we felt we didn’t perform.

“Seeing Westmeath this year and how well they did, it definitely did give us hope. We knew we weren’t far off it if we knuckled down and learned from the mistakes. After defeat, you have to learn from it.”

“As the saying goes, it’s anyone’s game. On the day, you don’t know what’s going to happen. We have seen in the football, with Tipperary and Cavan, anything can happen in a Final. Antrim deserve to be there as much as ourselves. We’ll both be going in to do our best and that’s all you can do at the end of the day.”