CAMOGIE: “It’s a powerful statement. It shows the Gaelic games family is a place of diversity and inclusion now” – Dervla Higgins 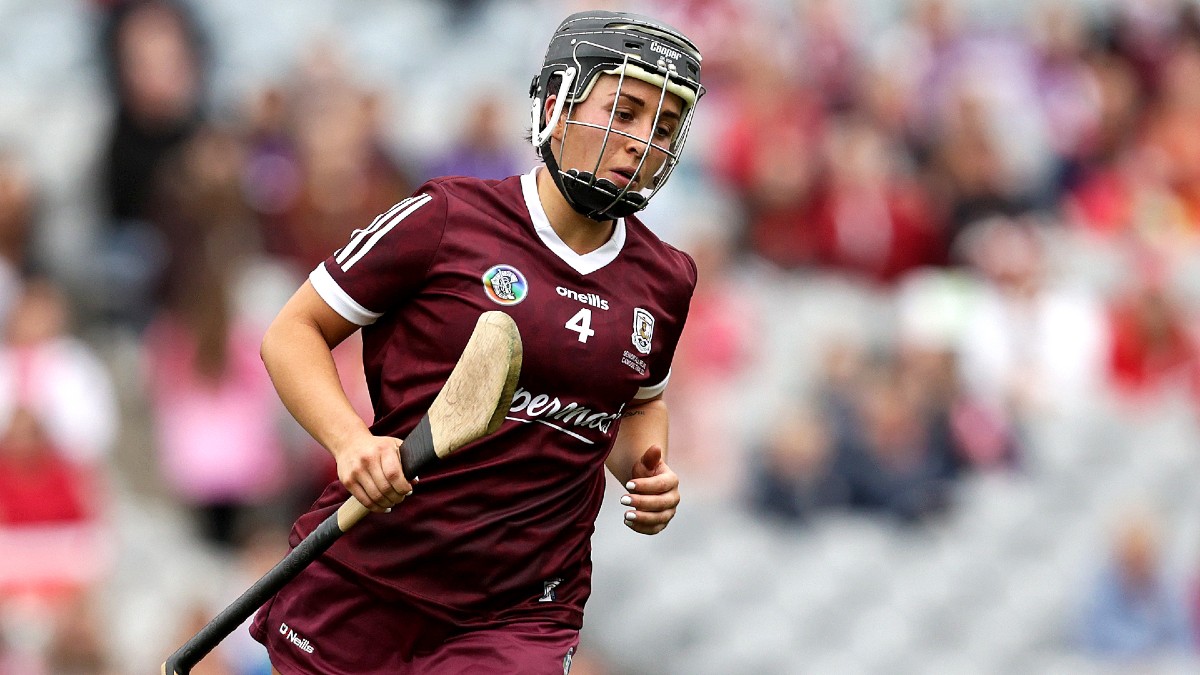 Dervla Higgins has had a few swerve balls thrown her way in her bid to establish herself as a Galway player and while nothing is certain in an environment that emphasises equality of opportunity regardless of reputation, the Athenry defender is now one of the premier corner-backs in the land and a front runner for an All-Star when the awards are announced next month.

So Higgins celebrated her 25th birthday on Friday (4th February) in a good place. She has identified a pathway for adding to her physiotherapy qualifications, while her club is in the process of creating history to be the first to develop its own camogie facility. She has climbed camogie’s Everest and maintains an appetite to do it again and again.

All of that ties into the personal equilibrium. When Galway travel to Dublin in two weeks (Saturday, 19th February) to commence their Littlewoods Ireland Camogie League campaign, they will do so with a new jersey, courtesy of a ground-breaking five-year quarter-of-a-million-euro sponsorship deal with Westwood Global. (this week’s game against Offaly was postponed).

It represents a commitment to the development of camogie in Galway from the academies upwards, ensuring high performance sports services are available to give young hopefuls the best chance of reaching their potential, to raise the bar even further. But there is a human element to it as well.

“It’s huge and there is a lot of publicity around it at the minute,” notes Higgins.

“It’s all the way from U14 up until the senior squads, every single age-group that benefit from the deal. It’s going to be big for all players. It’s definitely a step in the right direction for female sport. It’s a benchmark, a starting point.”

The aforementioned new kit is an eye-catching one, complete with the LGBTQ+ rainbow colours representing inclusiveness. It follows in the footsteps of UL GAA, who incorporated the colours in their jersey last year and Galway’s camogs have now brought it to the inter-county sphere.

It has a real personal meaning for Higgins, though she reports that she did not suffer any negativity surrounding her sexuality. She recognises that so many have had different experiences, however. Providing exemplars and removing any hint of ‘difference’ about not being heterosexual is imperative.

“It’s a powerful statement. It shows the Gaelic games family is a place of diversity and inclusion now. I think it’s very important for the youth as well… I’m sure it’s going to help a lot of kids at home who might be looking up to role models; if they are struggling it might make it easier for them to deal with it.

“Myself, I actually have a girlfriend for the last five years. So it’s something that I am very proud of to have on the sleeve of the jersey. I think it’s a huge step in the right direction.

“I was very lucky, I had a very good experience. It would have been while in college in Athlone. I came to terms with it, coming out to family and friends and stuff like that. And obviously I was involved with the Galway set-up at the time as well. And everyone, management, players and backroom people were very accepting of it. They never treated me any different.

“So I do think it is such a powerful statement. I know the Galway management and the county board along with our sponsors, it was their idea. It’s a statement of their behalf as well, to show the type of team and county we are. We are inclusive of everything and everyone.”

Higgins is looking forward to getting back to competitive fare now, though it has been a little different this year with clubmate Noreen Coen having stepped away after a decade in maroon.

Coen was a familiar face when she joined the senior set-up first but now it is her turn to fill the mentoring role as the Rabbitte sisters – daughters of former hurling All-Ireland winner Joe – Sabina and Olwen come into the fold. Mind you, she has a bit to go yet to accumulate the bank of knowledge of another clubmate, the legendary Therese Maher, who has been a key part of the management in recent years.

All the other big names have returned, with Murray cleverly having issued the challenge within minutes of winning the All-Ireland. He said it publicly in the post-match press conference but by then, he had already put it to the players. To be a great team, you had to do two-in-a-row.

“I actually remember clear as day in the dressing room afterwards, we had a few celebrations and the cheers and stuff but it was definitely something he mentioned on that day and I have heard him mention it quite a few times since then. And I think it just goes to show the determination that he’s put amongst us as players in the camp.

“And new year this year, it’s put behind us and we have a new target put in place. It’s good to ground yourself again. In order to succeed it’s important to focus on the new task at hand.”

Higgins had been flip-flopping between the intermediate and senior squads since 2015. After impressing as Galway got to the All-Ireland intermediate final four years later, she was ready to push on but the sliotar refused to bounce for her.

“I got a good bit of gametime but I fell ill with the Covid during the championship so that kind of wiped me out of it completely… I was out for the two weeks so obviously wasn’t doing any training. I have a set-up here in the house alright with a small gym so I was able to do a bit of that.

“But I will never forget the first evening going back training, we were in Dangan, and I was just doing the warm-up, the first 15-20 minutes where we do the dynamic stretches and sprints and stuff. I just had to put my hand up, my lungs were just gone. I was chasing my tail for the rest of the 2020 campaign trying to get my fitness back up.”

Heather Cooney’s cruciate knee ligament injury left a vacancy and Higgins capitalised on the opportunity. This is the importance of the Littlewoods Ireland Leagues. There will be chances but, in this team, if you get the jersey, you can make it yours. Which is why Higgins knows nothing can be taken for granted.

“Last year when I got back in fit at the start of the year there was only one thing on my mind, poor aul Cathal Murray knew that as well. Last year would have been the first year I got myself out there and established and got my spot on the team. This year, I am just hoping to try and hold onto it as much as I can.”

Competition is fierce with Cooney champing at the bit having returned to fitness and the Sarsfields contingent have to return yet too. But Higgins doesn’t fear that. She knows about ups and downs.

It was a shock to be sent off in the All-Ireland semi-final defeat of Tipperary last year, and not having any clue why. She stressed initially that it would cost her side the result and then for a little while after, that she would miss the decider, but referee Ray Kelly was quick to put her out of her misery and report that a mistake had been made.

“To be honest, it was a complete whirlwind. When it was happening, my head was up in the clouds, I didn’t know what was going on. You were doubting yourself straight away. Did I do something or did something happen that I wasn’t aware of?

“I wasn’t long off the pitch, Murray had a glance at me and I was chatting to one or two of the girls; they seen everything that happened. They reassured me that, ‘you are actually fine, it wasn’t you’. It was the night of the next day that it came around, the statement was put in by the referee and stuff that it was just a genuine mistake.

“It didn’t carry on for too long. It was all forgotten about, head down then for the All-Ireland final. Thank God, it could have been a completely different story altogether and that would have been shocking but I got over it.”

And how. She played her part too in publicising Athenry’s fundraising initiative that yielded around €700,000, which will see two natural pitches, a full Astro-turf pitch with floodlights, clubhouse with dressing rooms and a centre for the community.

“They are putting a 1.5k floodlit walkway around the pitches as well with a particular emphasis for those with special needs. It’s going to promote female sports as well. If people know the facilities are there they might come down and watch the match and do a bit of exercise as well. It’s a community base but we need it. We have over 450 members. It’s something we struggle with every year trying to get pitches and training slots.”

The focus is back on Galway now though, in a competition the Tribeswomen won in 2019 and reached the final of last year.

“Cathal Murray said that since day one. If you are performing in training and you are putting the work in, he always gives every player equal opportunity to put your hand up in league games. That is why we do so well in the League as well I suppose. We are so competitive amongst ourselves to get on the team for the Championship.”

Higgins is the living embodiment of that philosophy and of the benefit of a healthy, inclusive environment enabling individuals to blossom.