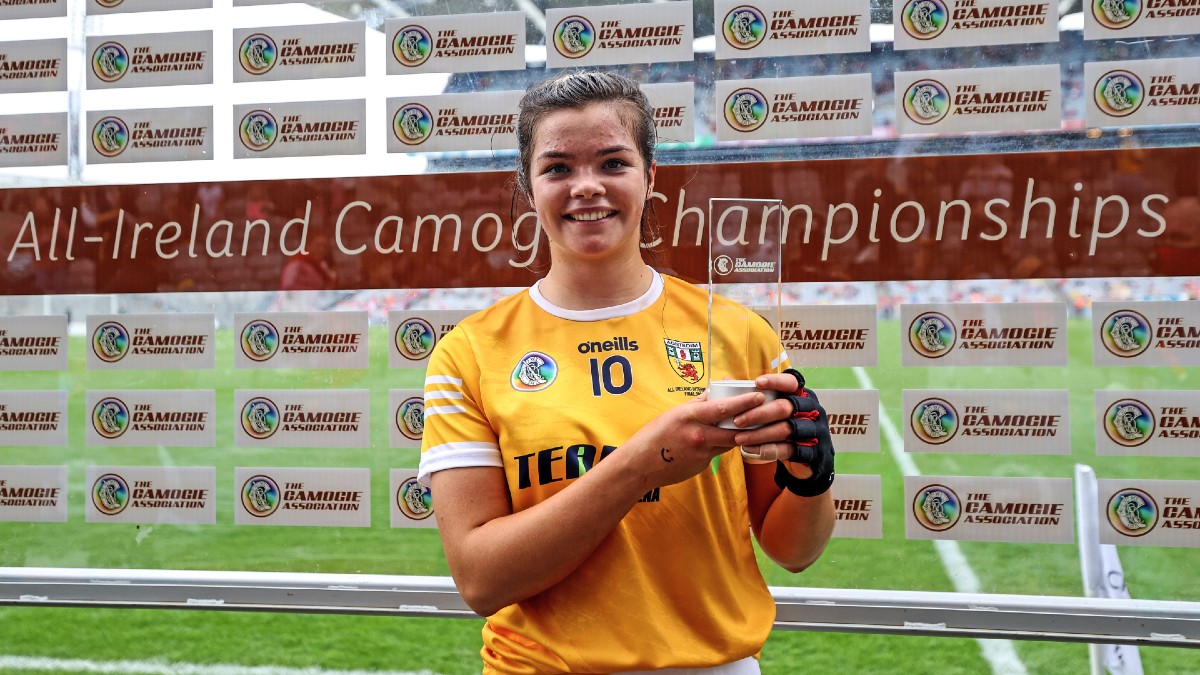 There were strong memories of past heroes and legends around Croke Park as Antrim put on a remarkable exhibition of scoring that Kilkenny could not answer, to win the All-Ireland intermediate camogie final and book their place in the senior ranks next year.

Player of the match Maeve Kelly scored a goal and five points from play, with her colleague from schools and underage fare, Róisín McCormick slotting nine points and when Catrine Dobbin answered Sophie O’Dwyer’s goal with a ruthless finish of her own, there was no way back for the outgunned Noresiders.

“It doesn’t seem real yet but it’s just fantastic to get over the line,” enthused Kelly. “There was no doubt we weren’t going to lose today. We had our minds set straight that we weren’t coming off that field without the cup.

“It’s Croke Park. It’s the first time for many of us. I came to Croke Park for the first time ten years ago with a friend, it’s actually her ten-year anniversary today. I knew someone was with me today and I thank God she was with us and she helped us get over the line.

“We were a bit nervous in the first 15 but we always knew our strength and fitness was going to have to pull us through and it did.

“It was definitely not easy. It was a very physical game and we’ve got the bruises to come out of it but that makes it even better to come through the other side of it.”

Her first-half goal was a fantastic illustration of footwork, power and composure.

“I saw two players in front of me and thought, ‘I need to get past them,’. I said, ‘This is my chance,’ and I took it. I dropped it but I got it straight back again and there was no way that wasn’t going into the back of the net.”

“It’s hard to put into words what we’re feeling,” McNaughton explained. “When the final whistle blew, it was relief. Excited, ecstatic, it’s hard to find the words.

“When they got the goal, it was all about how we reacted. It was trying to get the response and we did get the response… it was a wake-up call for us. We got a point, another point.

“Today was our best performance… Our forwards played brilliant, but throughout the whole year, the backs have been solid. Forwards get scores but it’s the hooks and the blocks too.

“I can’t remember much of the match. But I think we left our best performance to last. It’s a great team effort and I can’t thank the team management enough for getting us here where we are. Physically, we’re so much stronger than last year and our team play is so much better.”

In the midst of the maelstrom, Kelly allowed herself to think of senior camogie in 2022 and is relishing the opportunity.

“It’s amazing. It’s what everyone dreams of. We’re a young team but that’s the next step. That’s where we want to be, that’s where everyone wants to be, so bring it on.”