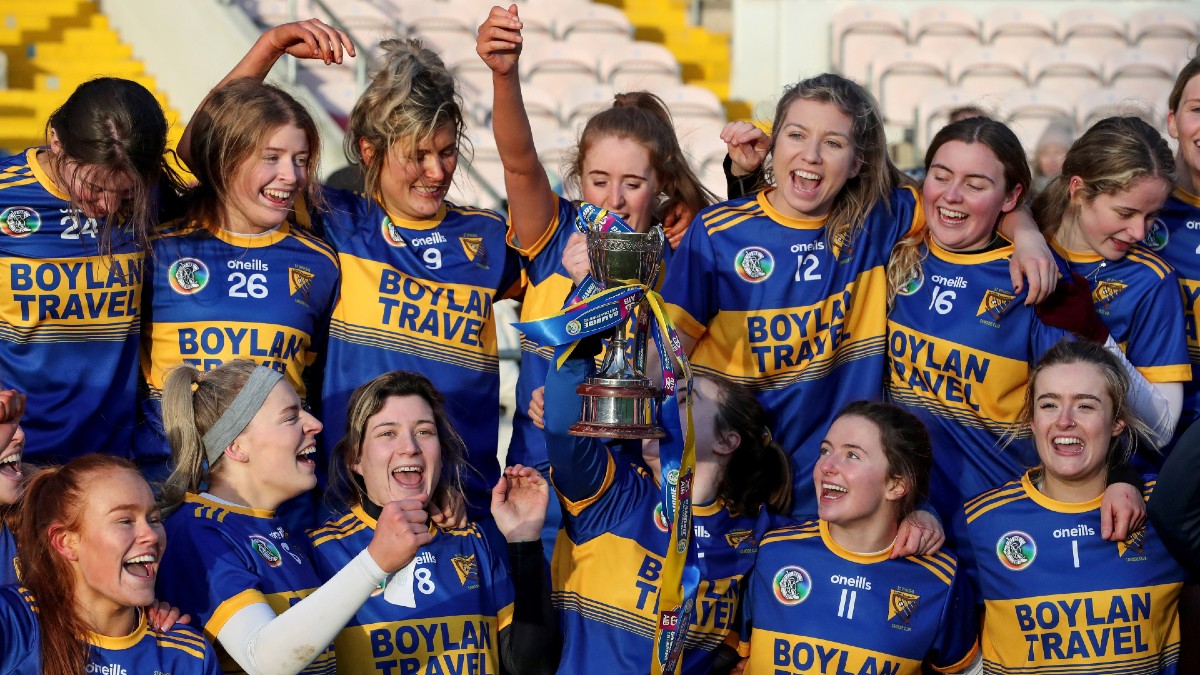 Mark Dunne admitted that he could not stop his mind wandering back to the 2019 AIB All-Ireland Intermediate Club Camogie Final as the clocked ticked down on yesterday’s 2020 decider at Semple Stadium.

On that occasion, the St Rynaghs team he manages jointly with his sister Molly led by a point late on, only for Gailltír sub, Úna Jackman to crash a goal and shatter their dreams.

Once more, the Offaly champions held a marginal upper hand, two points ahead after the teams had been level six times, and once more, Gailltír poured forward.

This time, it was different though. Dunne’s charges claimed the last two scores and the Agnes O’Farrelly Cup was bound for the Faithful County rather than returning Suirside.

“It’s huge, especially after losing the last one and what we’d to do to get there in the first place. It’s sweet,” Dunne admitted.

“It’s hard to reflect on it straight away what kind of game it was. At times there was some really good camogie, at times it was a dogfight. I thought it was never going to be blown up in the end. The nightmares were coming back.

“The work those girls put in, no more than Gailltír when they won it. Today was our day. Gailltír are a fantastic team and they were fantastic again today. There was probably one moment changed the game and they’ll be back stronger again.

“They never stopped which we expected. We learned that the last time; they don’t stop.”

The moment Dunne referred to was Aoife McLoughlin’s 33rd minute goal that gave his team a lead they never relinquished.

It is not one Ciara Jackman will remember fondly. The Gailltír goalie had an otherwise outstanding game, making one excellent save and a number of other smart interventions but her fumble from McLoughlin’s 30m shot was significant.

So too, however, was Ellen Galligan’s double save from Anne Corcoran and Alannah Sullivan at the other end in the 52nd minute, not to mention Kate Kenny’s nine points. The last of those, in injury time, just before Mairéad Daly opened that coveted four-point gap, was one for the ages.

“I thought I was going to overcarry it,” noted a grinning Kenny after collecting her player of the match award. “I overcarried one right before it, so I just let it hop off the ground and I got it back and I turned. I just said, ‘Oh just shoot and hope for the best,’ so I took a shot and it sailed over the bar and the crowd was unbelievable behind me. I was delighted.

“I’m just so happy that all the hard work we put in over the last three years really has finally paid off and we can reward our managers for everything and all the work they put into us.”

Annie and Aoife Fitzgerald had points on the board for the Blues within 38 seconds of the throw-in but despite that apparent shock to the system and playing into a very strong wind, there was no sense of anxiety.

“We didn’t panic but we nearly target making mistakes early in a game now to get it out of our system,” Dunne observed. “Some days we start fast but there’s a good few times we’ve started slow and conceded easy scores so it wasn’t something that was new to us.

“I think once we got our structure right playing against the wind they probably struggled for a few scores. We weren’t executing the final ball up front ourselves but in general, we were on top. I think after the first two points, there was a ten-minute spell where we hadn’t a puckout.

“It became very packed in the middle third and both teams were struggling to get their forwards on it in attacking areas but we got a couple of crucial scores at the end, when they pushed on, we capitalised on the space a bit more.

“There was probably a phase when we were getting sucked back the field too far and we lost a bit of shape up front. Once we got that back and were just patient, and they abandoned the sweeper we’d given them, we had one-on-one and chipped over a couple of great scores.”

SCORERS FOR GAILLTÍR: Aoife Fitzgerald 0-6(3fs); A Corcoran 0-2; Annie Fitzgerald, A Hartley 0-1 each