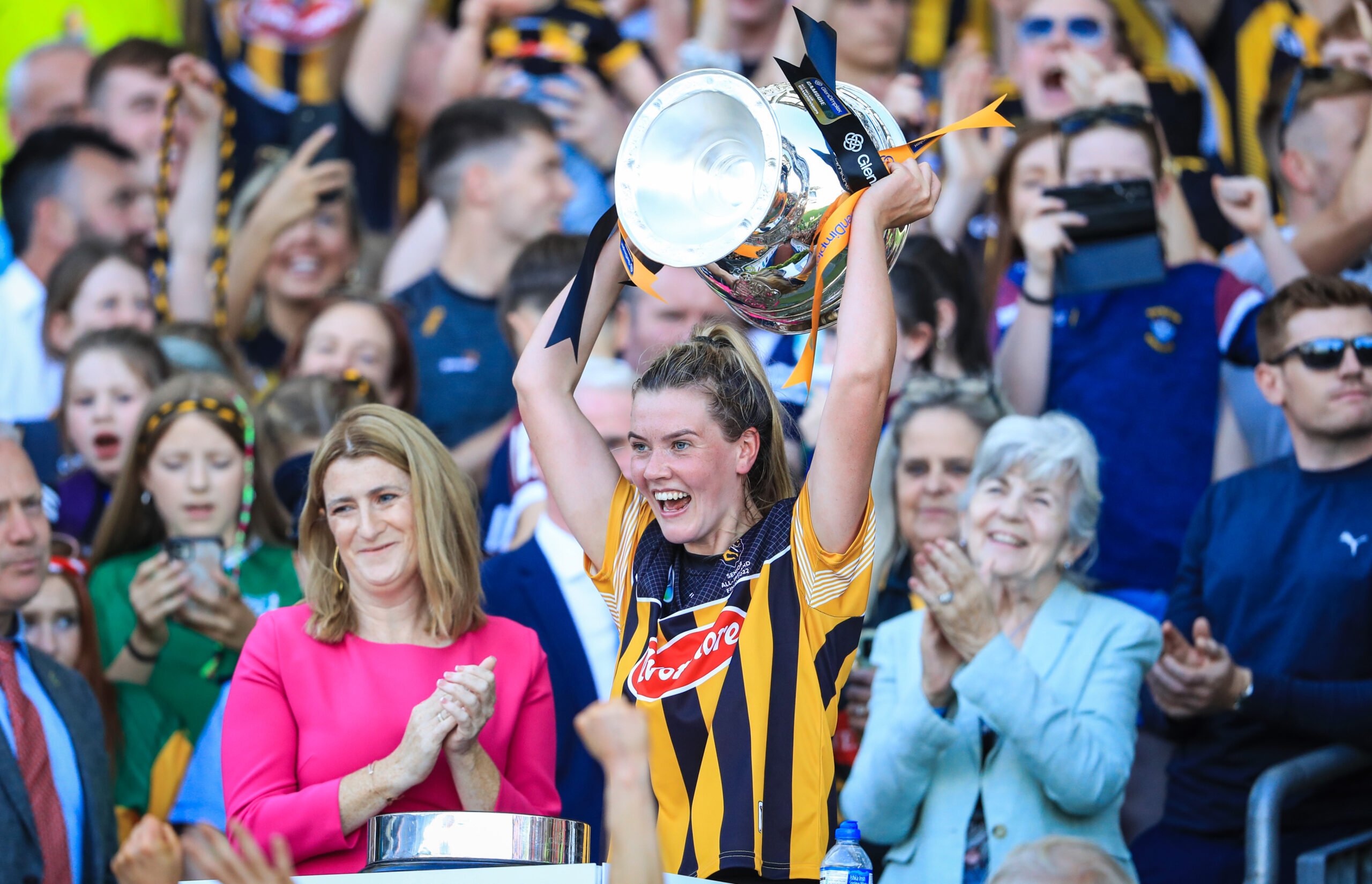 A pointed free from 45m by Denise Gaule in the second minute of extra time snatched a dramatic victory for Kilkenny in a pulsating Glen Dimplex All-Ireland Senior Camogie Final played in front of a bumper attendance of 23,426.

Gaule made no mistake, despite not having her normal accuracy over placed balls this year and ceding responsibilities to Katie Nolan for much of this game.

There were countless other heroes of course. The Walsh cousins, Grace and Miriam were magnificent leaders at the edge of either square.

Grace made clearance after clearance and came up with a remarkable last-ditch block to deny Katrina Mackey a potential goal in the first half.

Miriam continued her stellar campaign with three points, two out of the top drawer in the first half. She also was fouled for two frees including the winner.

Sophie Dwyer came off the bench to provide the 58th minute goal that breathed life back into the Stripeywomen, building on the good impression she had made in quarter-final and semi-final cameos to respond quickest after Niamh Deely’s blocked shot looped into the air, forcing a back-pedalling Amy Lee to just bat it out at full stretch into her path.

Cork had moved two points ahead for the first time three minutes earlier via an Amy O’Connor free, after Hannah Looney had given them the lead following another rampaging run from the electric Fiona Keating.

It felt like the Rebels were just gradually asserting the dominance they had been showing for most of the previous 40 minutes or so on the scoreboard.

They had begun with a similar lethargy displayed in the semi-final against Waterford and did not get on the scoreboard until the 20th minute, when Keating slammed home a brilliant goal after galloping away from the cover after picking up possession just inside the 45.

Up to then, it was all one-way traffic in the other direction, as Kilkenny broke from the traps in devastating fashion. They were winning all the 50-50s and as proceedings wore on, didn’t even have to do that as they seemed to have time in possession wherever they were.

Tiffanie Fitzgerald pointed from the very first play, before the teams had a chance to move into game configuration, which was the only reason she found herself in an advanced position. She and sister Steffi were the first starters the Young Irelands club have ever had in a senior final and Tiffanie quickly sprinted towards the full-back line.

Nolan and then Walsh’s brilliant brace followed. Gaule slotted two in 30 seconds and it was 6-0 with 15 minutes played.

Cork were in the horrors but Keating’s goal certainly buoyed them and they began to play with more confidence. From there to the end of the game, they at least held their own and for large swathes of affairs, held the upper hand, troubling Kilkenny with their pace where Keating and Mackey certainly had the sirens sounding. Hannah Looney thundered into the fray too.

Keating and Mackey supplemented two frees by O’Connor and though Michaela Kenneally had pointed for Brian Dowling’s outfit, in the click of the fingers, the teams were level 0-7 to 1-4. Mackey’s equaliser told of the new-found confidence in Matthew Twomey’s team, coming at the end of a triangle of passes from Chloe Sigerson and Sorcha McCartan.

Half-time came and you had to think it was Kilkenny that wanted it more given how the tide had turned now that the Rebels were matching their work rate and making inroads with their running game. Méabh Murphy and Laura Treacy were composed in defence too.

But Kilkenny had their ferocious industry, evidenced by Nolan and Katie Walsh among others. And this is a storied rivalry that is rarely one-sided so no one was surprised that they were level five times in a wonderful second half.

Cork led for the first time thanks to an O’Connor free, a second for a foul on Ashling Thompson, but Miriam Walsh and Nolan, from a foul on the powerful Tullaroan attacker, got Kilkenny back ahead.

Over and back they went from there, Keating levelling after good work from Sigerson and Mackey, and then Mackey sending one soaring over from right on the Cusack Stand sideline 44m out, only for Nolan to equalise again from a free.

Then it was Saoirse McCarthy on the run and Nolan keeping Kilkenny in touch. The diminutive St Martin’s dynamo did the needful once more when O’Connor had thumped a free over at the other end, but then came the period when one thought Cork had separated themselves, ever so slightly, by establishing that two-point buffer.

They don’t call it the most dangerous lead in the world for nothing. Dwyer made no mistake from off the sod for the goal but then Mackey, as dynamic as her first day in the squad in the early part of the last decade, sped away from four defenders and batted over right on the hour.

Even after Gaule’s winner, there was still one final chance for Cork as Thompson advanced to about 55m out and shot off her left. The Milford talisman’s effort, after 65 minutes on a sweltering day, was just tugged marginally however, and though having the distance, dropped marginally wide.

The puckout was the last play and a game for the ages had finished in Kilkenny’s favour.