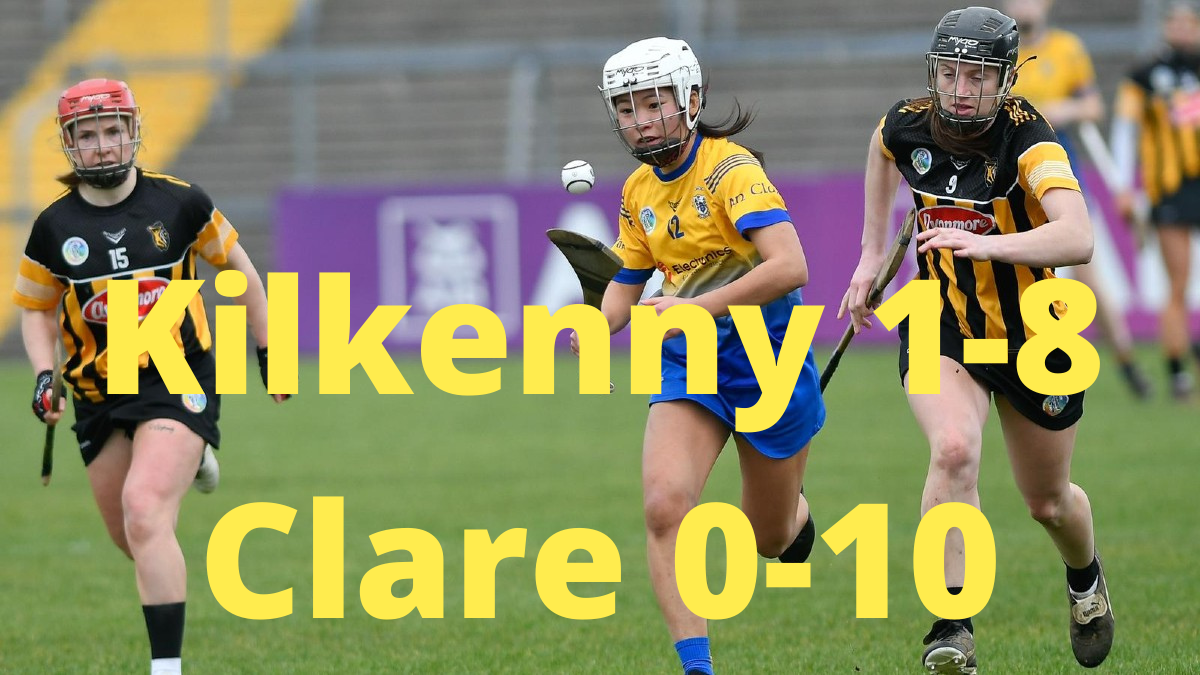 Kilkenny teed up a winner-takes-all final round showdown with old rivals Cork after relievedly maintaining their perfect start to this year’s Littlewoods Camogie Leagues in Cusack Park Ennis this afternoon.

Trialing by three entering the final ten minutes, successive home points through Lorna McNamara (2) and Eimear Kelly regained full parity by the hour mark at 1-7 to 0-10.

However, a determined Kilkenny managed to rally one last time to clinch victory as from the puck-out, centre-back Kellyann Doyle joined the attack to impactful effect as her shot just crept inside the right post to inch the Cats over the line.

It was cruel on the Banner who in contrast to drawing a second half blank against the strong conditions seven days previously at the same venue against Cork, actually outscored their visitors by 0-6 to 0-4 this time around.

Newcomers Lorna McNamara (3) and Caoimhe Carmody (2) were instrumental in belying the elements while goalkeeper Doireann Murphy was again in inspirational mood with two superb saves.

For long periods, it almost seemed a case of Déjà vu to the Cork defeat as Clare never made the most of a strong first half wind advantage.

The big difference was that Kilkenny managed to breach Clare’s defence with the only goal of the game, with Banner goalkeeper Murphy having already saved a sixth minute penalty from Denise Gaule. It proved pivotal in Clare gaining a foothold in the tie as while Caoimhe Carmody and Eimear Kelly points were matched by Katie’s Nolan and Power, a Lorna McNamara free had nudged the home side back in front at 0-3 to 0-2 by the 23rd minute.

The goal altered the narrative irrevocably however as Walsh used her experience and strength to bypass Clare’s last line and strike to an empty net, followed quickly by points for Gaule and Laura Norris to power 1-4 to 0-3 clear.

Aine O’Loughlin did pull back a point for the hosts before the break and would continue to ask questions of the Leinster side throughout the second period.

With Lydia Fitzpatrick, Katie Power and Katie Nolan to the fore, Kilkenny carved out two glorious goal opportunities nearing the midway mark of the new half. However, goalkeeper Murphy’s reflexes were cat-like (excuse the pun) to deny a Nolan bullet while after a clumsy foul on Niamh Deely, Denise Gaule rifled the resulting penalty just over Murphy’s crossbar at 1-6 to 0-6 by the turn of the final quarter.

In truth, Clare fared no better with their chances as Caoimhe Carmody chose to take a point when a goal could have been on soon afterwards while Eimear Kelly uncharacteristically missed a pull at the edge of the square.

When Steffi Fitzgerald arrowed over a 51st minute single to restore a three point margin, it seemed as if Kilkenny had done enough to prevail. However, no-one seemed to inform a defiant Clare who incrementally crept back into contention through a McNamara free and a trademark Eimear Kelly point to slash the arrears to the minimum by the 56th minute.

A foul on Lorna McNamara did provide a difficult opportunity at an equaliser on the hour mark, one which the rookie grasped with aplomb thanks to a superb 35 metre free from the right touchline to level up for only the third time.

A draw would arguably have been a fair result but with their title on the line, the holders’ leadership would prove decisive once more as Doyle popped up for a worthy winner.

Afterwards, Eoin, and assembled media, caught up with the Kilkenny manager Brian Dowling.

Eoin also got the thoughts of Clare joint-manager John Carmody.