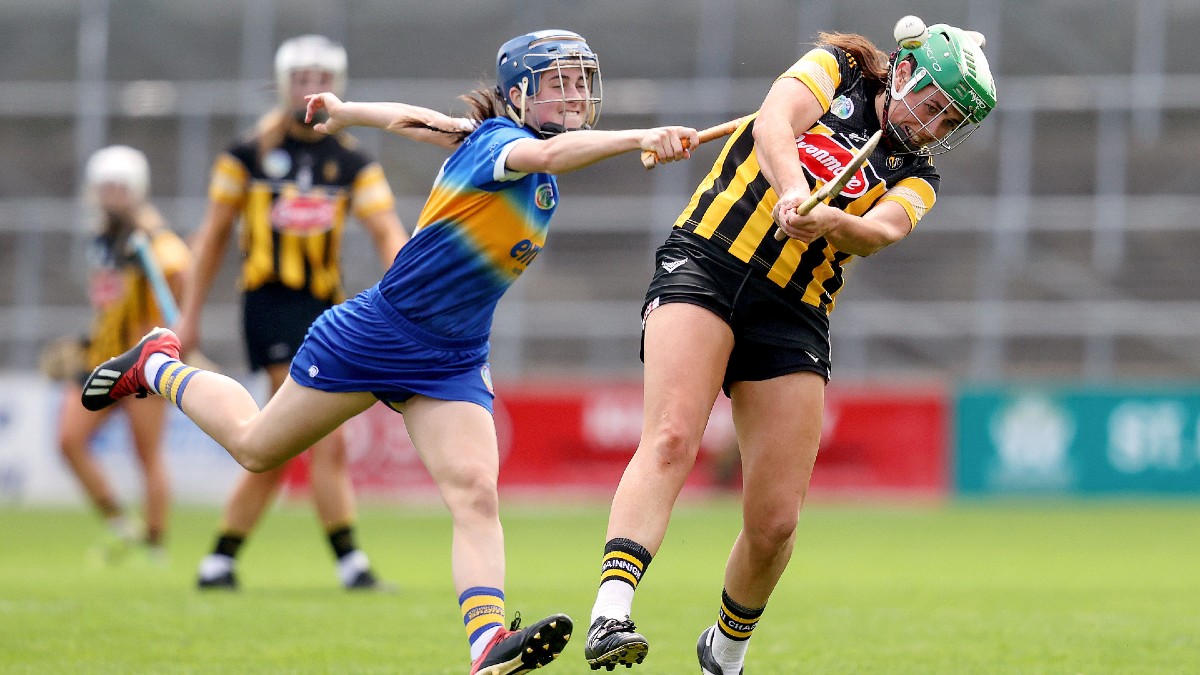 Two goals in a minute from the inspirational Denise Gaule and Katie Nolan, five minutes from the end of normal time snatched victory for Kilkenny in a dramatic Littlewoods Ireland Camogie League Division 1.

The loss will leave Tipperary brokenhearted however, after a near faultless display of intensity and clever camogie, that had the All-Ireland champions in disarray and playing second fiddle for the majority of proceedings.

Cáit Devane had given an exhibition in the first half, scoring eight points, four from play and most of the placed balls coming for fouls she had enticed. That this came with the one of the game’s best markers, Davina Tobin picking her up only added to the stature of this performance.

Devane travelled deeper in the second half but Emer McGrath was proving an effective target and having weathered the expected third-quarter storm, had again wrested control with points from Grace O’Brien, Sarah Fryday and McGrath, and then a Devane brace in response to two Gaule scores, to open up a five-point gap in the 54th minute.

Gaule’s goal a minute later was the crucial score. That she shot, from just outside the 20m line and a little to the left of the arc, was indicative of the trouble her side were in. It had plenty of purchase but Tipp goalie, the All-Star Áine Slattery looked to have it covered as she stuck up her hand.

To the young netminder’s horror, the power of the strike caught her by surprised, and flew into the net off her fingers.

Devane hit back with her 11th point and fifth from play immediately but from that puckout, Nolan was able to finish with a low shot and the teams were level.

Even then, Tipp showed plenty of character. First Ereena Fryday and then Orla O’Dwyer, introduced at half-time for her first appearance since winning an AFLW title in Australia, put the Premiers in front but Gaule was unerring at the other end, levelling on each occasion from frees.

And it was the Noresiders, who have been in similar situations often in the past, who found the decisive scores, Gaule calmly pointing two more frees to bring her tally to 2-8 and secure a famous victory.

It all looked unlikely as Devane capitalised on her team’s dominance to give a performance for the ages in the first half.

Kilkenny’s problems went further than that however, as they were second best in most of the physical exchanges.

What was impressive about Tipp was their use of the possession. It was considered, to a plan and Tobin had to contend with torrents of ball coming down the throat of one of the most talented forwards camogie has seen.

With the strength to go with her stickwork, Devane was unmarkable with Tobin denied any support. Karen Kennedy, back from wisdom tooth surgery, Emer Loughman and Mary Ryan were also outstanding in the Tipp defence. Róisín Howard and Emer McGrath also stood out. Tipp were on fire.

The early exchanges were extremely cagey, despite Gaule getting the opening score from a free after just 41 seconds for the All-Ireland champions.

Devane illustrated the soundness of her striking with a brilliant conversion of a 50m free out on the left, but scores from Katie Nolan and a stunning point on the run by Aoife Doyle either side of a Devane seemed to indicate all was well with the Cats.

A pair of points within a minute just before the water break by Devane gave Tipperary a 0-4 to 0-3 lead at the water break and they were completely dominant when play resumed.

Howard was central to that around the middle and she extended Tipp’s lead after a neat sidestep before Devane took over, her score from 60m and another after a tremendous diagonal delivery by Ereena Fryday standing out.

Nicole Walsh marked her birthday with a point and the lead was six.

Then out of nothing, Kilkenny had a goal on the half-hour, as Aoife McGrath fouled Gaule, left in rare isolation. Just as she did in the All-Ireland final last December, the Windgap ace drilled the resultant penalty to the net.

Bill Mullaney will have been thrilled by the response of his charges to the setback however, as they hit points from Devane (free) and Emer McGrath to leave it 0-11 to 1-3 at the interval.

It was no surprise that Kilkenny, fuelled no doubt by some vociferous messaging from Brian Dowling, found another two gears after the restart and upped the ante over the sliotar. They hit the first three points of the second half, Mary O’Connell’s stupendous effort from tight to the right sideline the standout.

Tipp’s obduracy stood out once more and they looked to have steadied the ship. But Kilkenny didn’t become All-Ireland champions by accident. It wasn’t pretty, but they gutted it out.

They found a way.