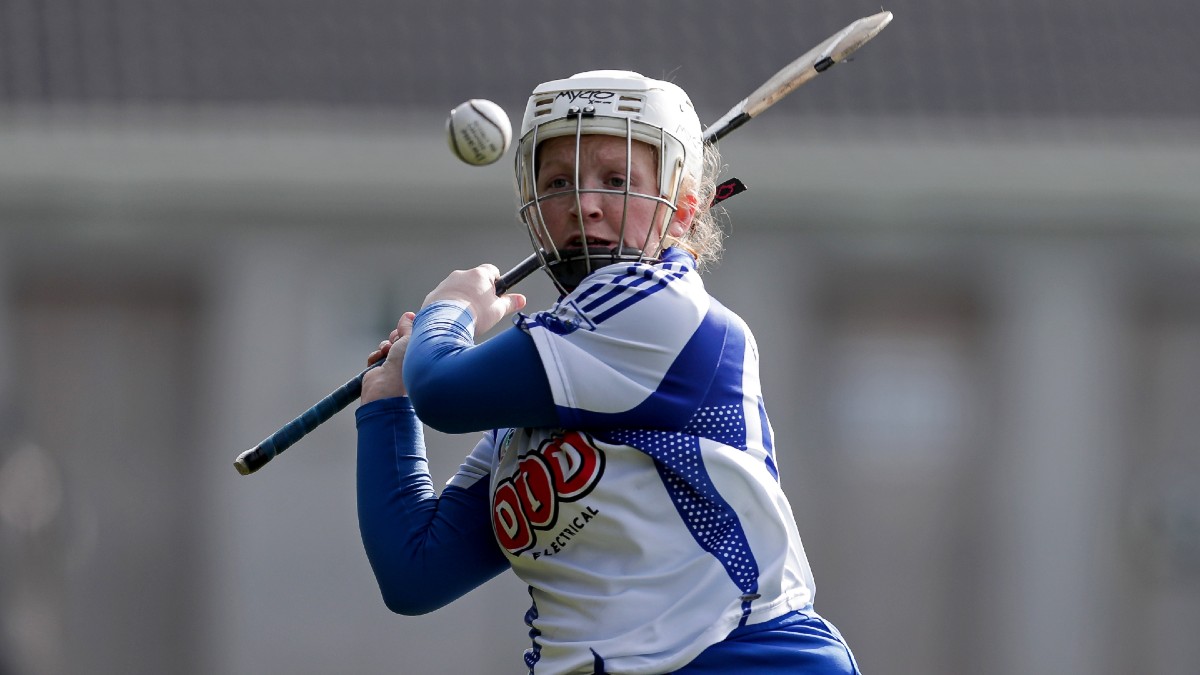 Think about the mental fortitude required to fill the solitary role of goalkeeper. No one to mark or marking you, not involved in the general play for long periods, often suffering the fate of a referee, mentioned only for a mistake. As for last line of defence, that mistake can often mean conceding a goal.

It is not for everyone, ever before you talk about the actual game skills required to fill the No 1 geansaí. It takes a special kind of individual. A steely mind.

Overcoming setbacks to deal with the here and now is a key characteristic of any successful sportsperson. The next ball. The next race. The next rally.

So is treading the fine line of understanding it isn’t everything, to have freedom, but treating it like it is in terms of being as well prepared as you can be and giving everything you’ve got in the preparation and the action.

This afternoon, at 2.45pm, Waterford’s Brianna O’Regan will be laser-focused as John Dermody throws the sliotar in to signal the commencement of the second of the programme’s two Liberty Insurance All-Ireland Senior Championship Quarter-Finals.

She is a completely different operator from the one that filled the custodian’s role as a 16-year-old in her debut season, when the Déise left Croke Park as Intermediate champions in 2015.

Her puck outs are more varied and considered. The shot stopping is at elite level, as evidenced by the spectacular diving save from Megan Dowdall’s penalty in last weekend’s win over Westmeath in Mullingar.

Clean sheets can generally be attributed to a unit performing to a system but there are times when you need the goalie to do something spectacular – O’Regan has done it a few times and has yet to concede a goal in three games.

On her time off, she heads down to the pitch with her cones to work on footwork and reflexes, the type of tedious stuff that those looking on from the outside never think of, chasing for infinitesimal gains, a one per cent that might just get you to the sliotar quicker, to cut off drama before it unfolds.

Make no mistake; this is deadly serious to her. She has left nothing to chance and is adamant that while Tipperary, as Semi-Finalists in the last two seasons and with some of the best players of the modern era in their ranks, will be ferocious opposition, Waterford must win.

But whether they do or not, she will decamp to her family. Her brother and sister. Her grandparents. Her aunt. The community that has always been there. The greyhounds. And she will lace up the boots again, for Camogie is a friend, not a foe, and losing a match will never change that.

O’Regan’s father, Bryan was a Mount Sion man, though he had hurled with Butlerstown when he was younger and with Roanmore a bit as well. As the eldest, Cian followed him up to Marian Park and it made sense for Brianna to do likewise.

When her time playing with the boys came to an end however, there was no Camogie so she had to switch to neighbours De La Salle. Having the outlet was absolutely imperative.

In 2006, when Brianna was just seven, her parents Bryan and Johanna, and 21-month-old sister Niamh, died in a house fire at their home in Ballybeg, on the outskirts of the city. Brianna, Cian and Aaron managed to escape.

Asking about the mental resilience required to play goalie is redundant here.

The three siblings have lived with Bryan’s parents, Patrick and Joan since, while her aunt, Karen is a constant support. The community rallied immediately and are always present. Greyhounds, Camogie and the GAA have been central to the process of living since.

“We had greyhounds out where we used to live, and they helped my grandad cope as well so we stuck with it. Myself and my older brother are drilled into them as well. We have about 15 out the back.

“Camogie kind of saved my life. And having the greyhounds as well, and you kind of keep pottering around with them.

“I had and still have great people around me.

“I’m after missing many anniversary masses. And Grandad was like, ‘Look, your father wouldn’t want you to be here. He’d want you to be out on the pitch.’ When I miss them, I go down to the grave and have a few words with them.

“Camogie doesn’t put things into perspective but I kind of fall back on it. I had it and it’s always there for me.”

The games do bring their own unwelcome reminders, even if just fleetingly.

“It’s not the same when you see all the rest of the girls’ parents there but I’d have my nanny and grandad there, my aunty and my two brothers.

“They’re not here but they are here, if you get me.”

Nowadays, Joey Carton is almost best known for being father of Beth, who added to her lore with 1-14 against Westmeath. Beth being Beth.

Prior to the dual All-Star’s ascension to greatness, Carton was revered as a hurling coach with De La Salle, Waterford and beyond, becoming a games manager with Munster GAA.

It was Carton who spotted something in O’Regan to try her out in goals. Maybe it was temperament as much as ability. Anyway, the masterstroke was to couch the proposal in a way that what is invariably an unattractive prospect for children did not seem so.

“When we played the Féile in 2012 in Waterford, Beth’s father came up to me and was like, ‘We’ll throw you in on goal and we’ll get to the Féile Final in Croke Park.’ I thought little of it, I was, ‘Yeah, yeah, yeah, grand, no bother’, I thought I’d get back out of it but here I am, many years later!

“When I got put in there, you’d leave in a few goals but as you got older, I went, ‘Right, I’m gonna be stuck here’, so I had to train as a goalie. The speed drills, shot stopping, puck outs. You have to get your head right. It’s between you and the posts. That’s the way I see it.

“You leave in a goal and it could cost the game whereas out the field, you can leave the ball behind you and go back and get it. You have to have that mad mentality to be in goal.”

Her role model once she decided to be the best goalkeeper she could?

“Mags D’Arcy. She’s a bit mad like myself! She was a phenomenal goalie from Wexford and I look up to her big time.”

O’Regan doesn’t come across as insane, but we know what she means. It goes back to that mindset required to take that specific jersey. That special kind of individual.

She is 22 now, preparing for a third consecutive Liberty Insurance All-Ireland Senior Camogie Championship Quarter-Final on the trot. Waterford made considerable progress under Dónal O’Rourke and the testament to that was that two members of Derek McGrath’s backroom team with Waterford hurlers, at a time when they were among the best in the land – Fergal O’Brien and Dan Shanahan – would seek to succeed him, when they would have their pick of hurling jobs.

With all due respect to O’Brien, who is manager, there isn’t a Gaelic Games follower in the land doesn’t know of the new coach. Dan the Man. For many of these players, he would have been an absolute hero, Cú Chulainn rocking a back-to-front baseball cap.

“I’d say the first two or three training sessions we had, we were kind of fumbling balls, thinking, ‘Dan is our coach!’ So then you thought, ‘Okay, you’re going to have to rein it in now!’ We settled in, Dan settled in and we got down to work.”

This afternoon’s challenge is considerable. Tipperary may be a little bit further down the line in their development but at the same time, Waterford feel like they have paid their dues and that they need to take another step themselves. A first ever last-four appearance would maintain the upward trajectory of their graph.

“We’re going to have to make that breakthrough because we are progressing on the training pitch and in matches but are falling short at the Quarter-Final stages. Now, with the calibre of players we have, I think it’s time that we do push on and put Waterford Camogie on the map and that bit further up the stairs.

“But have to push on and get that win and get to a Semi-Final stage. And then hopefully keep pushing on.”

As she herself has always done.