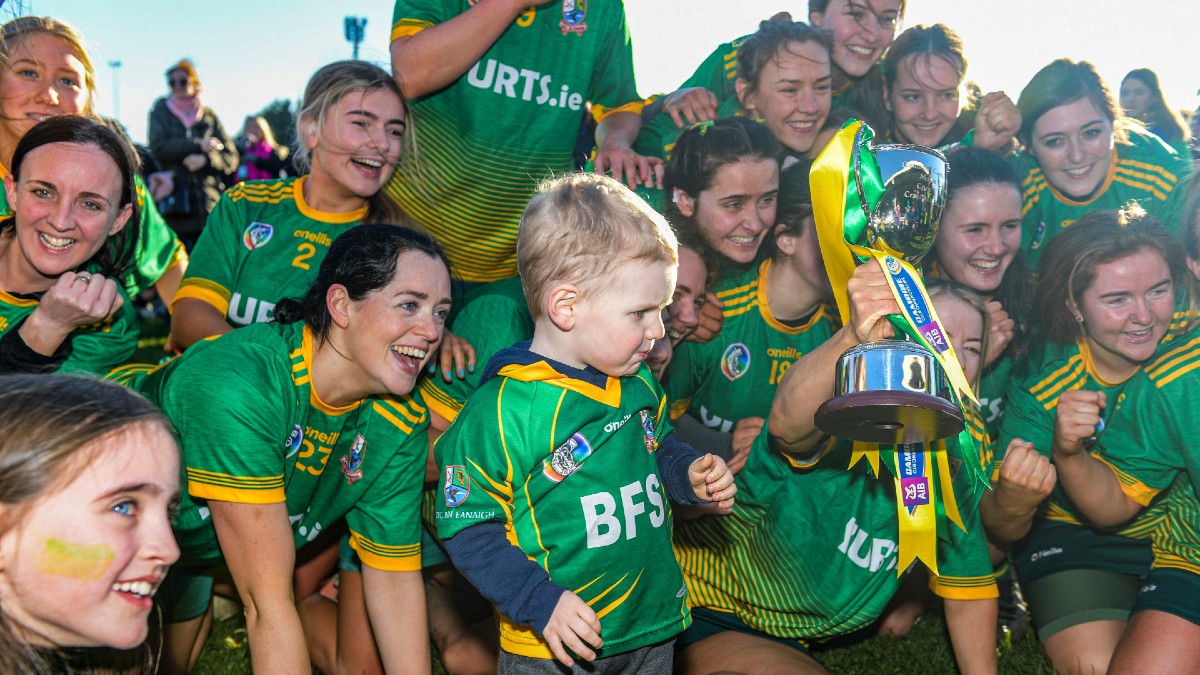 Last season’s runners-up Knockananna transformed agony to ecstasy as they emerged from a tremendous battle with Derrylaughan to finally get their hands on the AIB All-Ireland Junior B Club Camogie Championship trophy.

The Wicklow side had fallen just short against Tyrone opposition Naomh Treasa just before Christmas but when faced with Red Hand County representatives once more, they came up trumps at the O’Raghallaigh grounds in Drogheda.

The victory was deserved too though Derrylaughan threw everything at them in the second half, and especially in the final ten minutes, when only some desperate, heroic defending from the likes of 50-year-old goalkeeper Loretta Mutton denied Oonagh O’Neill and Rachel O’Neill goals that would have made things very interesting indeed.

Derrylaughan actually got off to the quicker start, with points from Caoimhe Coyle and Elisha Gervin but with Shannon Goeteleen exerting her influence as the fulcrum of the Knockananna defence, Tom Byrne’s crew settled into the fray. They were quickly level, thanks to points from Rachel and Ciara Byrne but were then rocked by an Oonagh O’Neill goal in the eighth minute.

It was a fantastic finish as the full-forward controlled a batted down ball by Mutton on the bas of her hurley and then volleyed with her second touch to the net.

But Knockananna were steely and began to turn the screw, hitting the next seven points to lead at half-time by 0-9 to 1-2. Rachel Byrne and Laura Hogan provided three each of those from play, with Ciara Byrne also brining her tally for that initial period to three courtesy of two placed balls and a score from play.

When Rachel Byrne sent a bullet to the Derrylaughan net three minutes after the restart that Orla Donnelly could scarcely have seen, not to mind stop, and Ciara Byrne stretched the lead to seven from a free, it looked like this was done but that was to reckon without the heart and determination of the Tyrone team.

With the likes of Bronagh Carney, who was sharing the field with her daughter Ella, helping to tighten things up defensively, the Knockananna scoring rate slowed and Derrylaughan chipped away at the other end.

Cassie Fitzgerald, who along with her sister Sian, was playing a little over a week after the death of their father Jimmy, for whom there was a minute’s silence before throw-in, drove forward and shot a brilliant point. Emma McAliskey also scored, while Gervin converted a couple of frees and Coyle pointed from another.

Ciara Byrne just kept Knockananna out of reach, meaning that Derrylaughan needed the major and though it was very close, it didn’t come.

For Knockananna, it was Redemption Day.