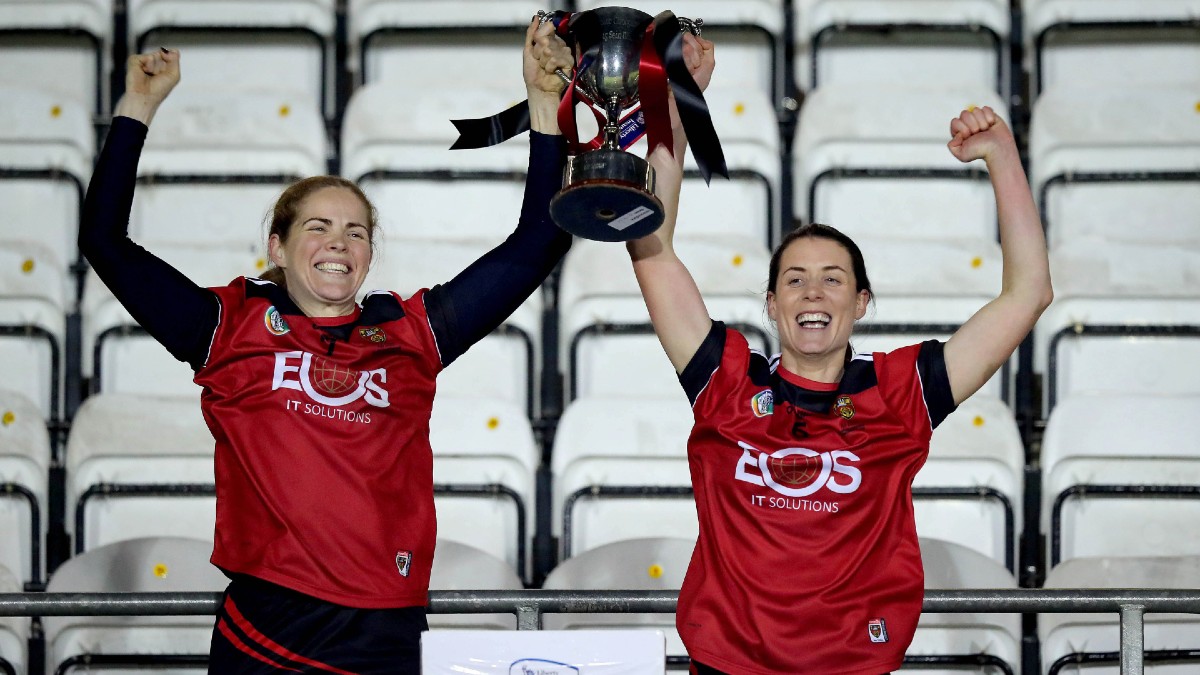 Niamh Mallon illustrated the full breadth of her wonderful talents as a well balanced Down made experience count, producing a power-packed second-half performance to win the Liberty Insurance All-Ireland Intermediate Camogie Championship for the first time in 22 years.

Mallon began at left half-forward but it was no surprise to see her drifting into full-forward for periods of play, a ploy that yielded significant pay dirt when the game was still there to be won.

The Portaferry star shot 2-3 from play, with the two goals in response to Maeve Kelly’s 36th minute strike for Antrim finally breaking their youthful opposition, who are sure to be in contention for honours in the near future once more.

Teenagers Kelly and Róisín McCormick linked well in the Saffrons attack at times, while Maeve Connolly provided tremendous leadership and Chloe Drain was resolute in defence too.

But Down just had too much firepower, with Sara-Louise Graffin proving a very influential foil to Mallon, while the likes of Sorcha McCartan, Lauren Clarke and Aimee McAleenan were selfless in their toil.

Further back, Graffin’s sister Fionnuala Carr thundered into the fray in the last 10 minutes of the first half, the 39-year-old marking her 22 years of representing Down at adult level in stirring fashion alongside fellow co-captain Karen McMullan.

Former dual star McMullan was in Australia when Down lost the 2018 Final but returned after three years away last term, when the Mournewomen fell short by a point at the penultimate hurdle to subsequent victors Westmeath.

They would not be denied this time around though, despite the shock of conceding a goal to McCormick after less than 30 seconds.

It took five minutes for Derek Dunne’s crew to regain their composure but they were in front by the 12th minute, Mallon, McAleenan, Paula O’Hagan and Graffin raising white flags.

Antrim were resolute however and hit four of the next five scores to establish a two-point advantage that could have been even greater, had Catrine Dobbin not just dragged her ground shot wide with Catherine McGourty coming out quickly to narrow the angle.

The Down response was notable, with three points including a wonderful effort by McCartan and then, after Nicole O’Neill pointed a free at the other end, Graffin bursting the net with a goal in the third minute of injury time, showing tremendous strength to make space and finish in trademark fashion, after brilliant play out wide by Clarke.

That made it 1-8 to 1-5 at the interval but Paul McKillen got the ideal response from his charges. Dobbin pointed early in the second half before Kelly drilled a fantastic goal in the 36th minute, the 19-year-old taking a shoulder from Dearbhla Magee with ease before unleashing a shot that was just too strong for McGourty to repel.

Drain denied McAleenan a quick riposte but it came shortly after, Mallon’s piledriver returning her side to the lead.

The extraordinary stickwoman followed up with a point, as did O’Hagan from a free and when Mallon concluded some deft footwork with a resounding finish after Clarke had done tremendously well to win possession; the writing was on the wall for Antrim.

They continued to battle but Down were dominant in too many sectors now. Their know-how shone through as they ensured that there would be no goals conceded, unafraid to concede frees to that end. O’Neill converted a few but as time ran out, majors were required.

In the end, it was Clarke who raised the game’s final green flag, a fair reward for her tireless efforts, though unfair on the vanquished side as a barometer of their efforts.

There could be no doubt about the merit of Down’s win however. They had done it at last.