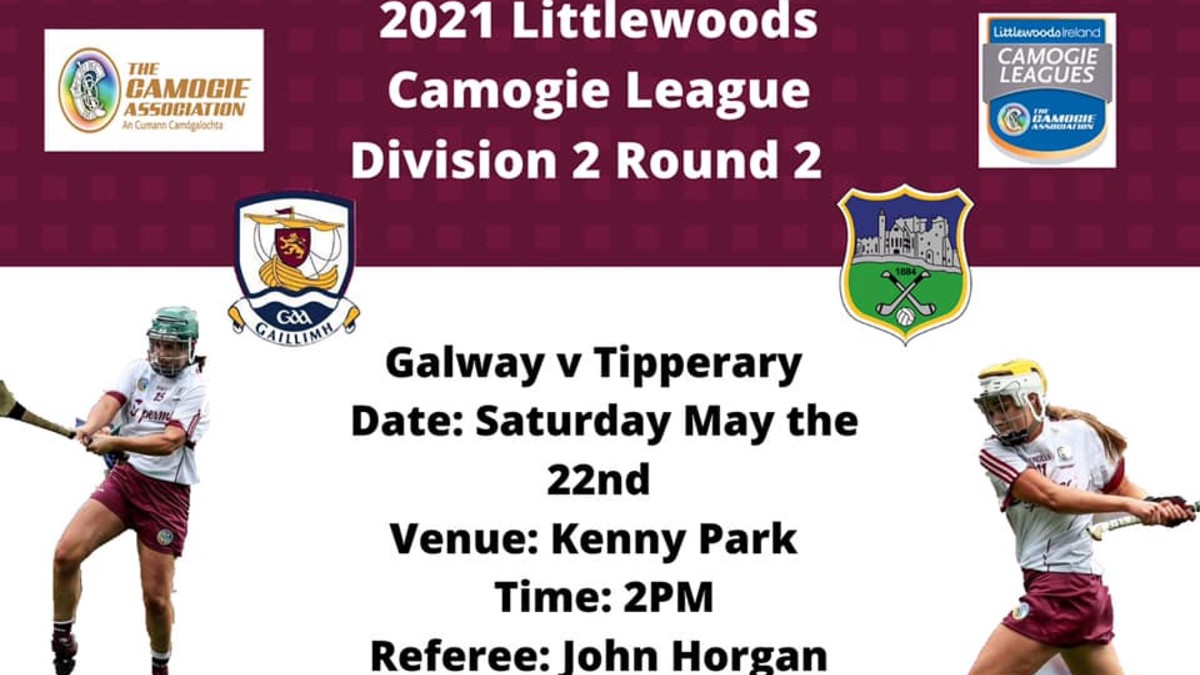 A must-win contest for both counties, Galway kick started their 2021 season at home to Tipperary as 2-3 unanswered straight after the restart proved decisive for Cathal Murray’s side.

The sides were level at 0-6 to 1-3 at half-time; Jenny Grace’s long range free for the Premier County fell into the net to ensure level terms but the elements and Galway’s relentless paid huge dividends by the 34th minute.

Niamh Niland pointed for the hosts on 32 minutes commencing a golden period with five successive attacks forcing the umpires to vigilant with their flag waving.  Cora Kenny came in from the right moments later leaving keeper Sarah Quigley no chance for Galway’s first goal.

That made it 1-7 to 1-3 but the Tribeswomen weren’t finished.  Niland found the target again before Mairead Dillon added another thorn in Tipperary’s hopes with the second maroon and white major before adding a minor and Galway were 2-9 to 1-3 clear on 34 minutes.

Both sides lost their opening ties so victory was essential for maintaining quarter-final ambitions.  Tipperary paid the price for wastefulness in front of goal but manager Cian Treacy could take some positives of their championship preparations.

The opening two attacks went Tipperary’s way but two wides was their harvest.  Their opponents replied with two scoring chances of their own with Áine Keane and Kenny slotting the ball over the bar.

This wasn’t a game lacking commitment with both panels determined to impress their respective managements.  And despite the low scoring, the game produced some season lasting moments.

Or to be more accurate, some superb goalkeeping from Quigley.  The Nenagh Eire Óg keeper produced a point blank save from Niland on 10 minutes that is a save of the year contender.  And she delivered another noteworthy stop from the same player before half-time.

Two Galway placed balls allowed Keane restore their two-point advantage by 24 minutes.  Jill Anne Quirke hit back for the Munster outfit but Niland’s shot on 29 minutes, another top drawer save from Quigley, deflected over leaving it 0-5 to 0-3.

Galway’s defenders picked up a number some knocks over the hour with Laura Ward and Lisa Casserly needing treatment.  But there was no luck for captain Ciara Donohue who left before the break, while centre back Caoimhe Mahon also left injured in the second period.

Mahon and Casserly were Galway’s top performers in the first half assisted by a brave full back line and mobile midfield.  But their endeavour didn’t secure an interval lead.

Referee John Horgan awarded Tipperary a free on the ’45 just inside the left sideline.  Grace’s attempt at the posts dipped just before the line dropping into the net for the game’s opening goal.

Treacy’s squad were finally ahead on 31 minutes but the advantage was short lived.  Substitute Elisha Broderick found the target leaving it 0-6 to 1-3 at half-time.

The breeze blowing away from Athenry town centre was with Galway in the second period but Tipperary gained the first opportunity only to register their fifth wide.  It proved costly with the Connacht team producing their most devastating period of the match.

By the time the clock hit 35 minutes, Tipperary were nine behind and staring a league exit in the face before Meagher converted a placed ball.

Ava Lynskey responded for Galway before Dillon made it 42 minutes and Tipperary needed a moment of inspiration before half-time.

It arrived from Grace preceding the water break.  A pattern that would remain until the conclusion, close range frees were aimed near the crossbar – this first attempt reaping the required reward and landing in the top corner for her second major.

At 2-11 to 2-4, the 2019 league winners were given a glimmer of hope but it was only short lived.  Dillon on 50 minutes was followed by Molly Mannion three minutes later and Galway were nine clear.

Both managements were emptying their substitutes bench now as the game lost any remaining flow.  Tipperary did get three more frees within range and Grace predictably sent the sliotar with some venom but each time that ball slotted over the posts.

Galway’s last point came from Tara Ruttledge keeping their opponents at bay but their opening victory for 2021 had been secured well before the finish.

Tipperary host Kerry next week (29th May) looking for a positive display ahead of the championship; Galway welcome Cork to Gort looking for the win that will send them into the final eight.