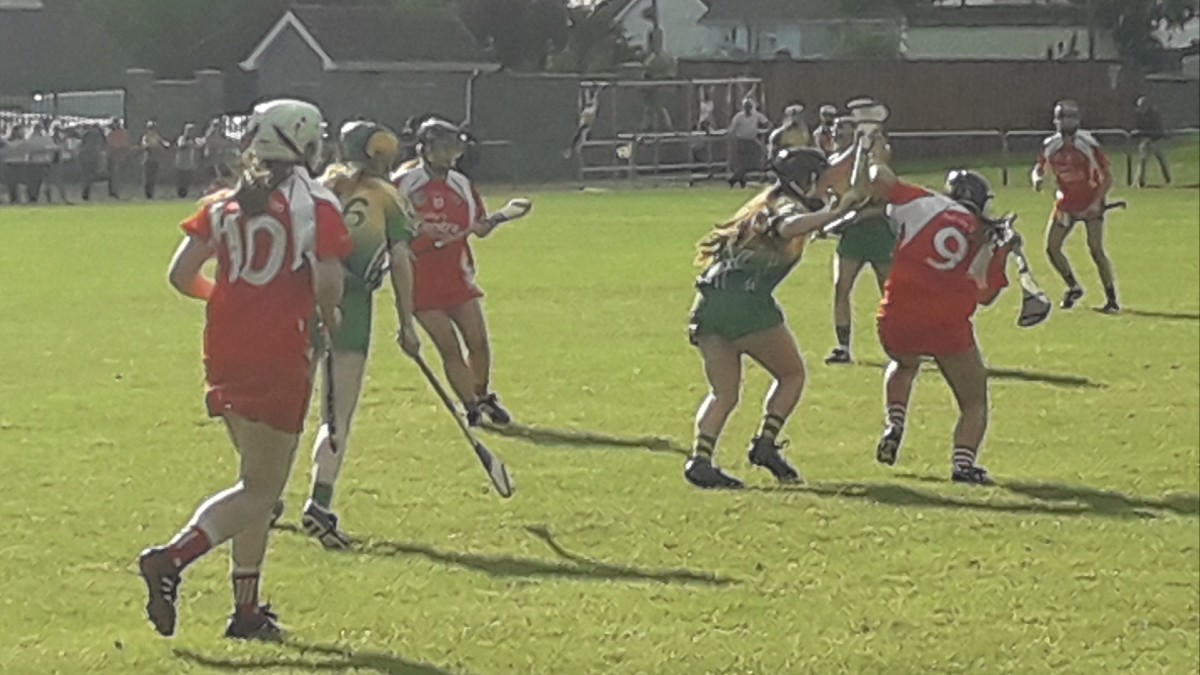 Camogie’s senior competitive championship return brought no end of excitement as Shinrone held on to take the spoils.

An Ava Moloney first half brace coupled with green flags for Marion Crean and Grainne Egan after the restart looked to have given last year’s runners-up a comfortable opening assignment.

Fifteen points separated the teams with just 10 minutes remaining and if anyone left Mountbolus early, they missed a stunning fightback from the hosts with joint captain Debbie Flynn getting a hat-trick.

The two teams had the honour of commencing senior camogie’s return to action after the lockdown as the country adjusted to seeing live sport again.

Fergal Cuddy’s charges were applying pressure and finding gaps and they were finally rewarded on 11 minutes.  Great industry from Jane Cleary allowed the opportunity for Ava Moloney and she made it 1-1 to 0-1.

It was a golden period for Shinrone’s full forward as she grabbed her second goal three minutes later and with Caitlin O’Meara, Michaela Morkan and Kate Bergin all troubling the umpires, the visitors were 2-4 to 0-1 ahead on 20 minutes.

The breeze slightly favoured Kilcormac Killoughey in the opening 30 minutes and they enjoyed their best spell hitting three scores unanswered through Eileen Bracken, Flynn and Aodion Kilmartin reducing arrears to 2-4 to 0-4.

But Shinrone captain Grainne Egan started stamping her influence on proceedings tallying a hat-trick of white flags before the break to give them a 2-7 to 0-4 advantage.

Kilcormac commenced the second half in positive fashion as Kilmartin doubled her account but they would wait 12 minutes for another point.

Shinrone hit 2-1 with O’Meara, who was her own major earlier due to a throw ball, turning provider to set up Crean and Egan goals.  When Egan added a point on 42 minutes, the gap was 4-8 to 0-5.

Flynn and Egan traded scores before the former’s 45 on 50 minutes began the most unlikely of comebacks.

Four minutes later, Flynn took her chances with a close range free and it found a way through for Killoughey’s first major.

Jane Lowry and Flynn made it 4-9 to 1-9 on 58 minutes before the green and yellow were awarded another placed ball.  Manager Donal Rigney instructed his joint captain to “go for it” and she duly obliged leaving six between them.

Crean responded for Shinrone which looked the insurance score but Flynn’s third 45 cancelled it out.  And on 62 minutes, we were treated to the goal of the game.

Flynn plucked the ball from the sky and started on the run.  Space opened and the former Community Games gold medallist continued her attack, concluding with a memorable third goal and an unlikely chance at redemption.