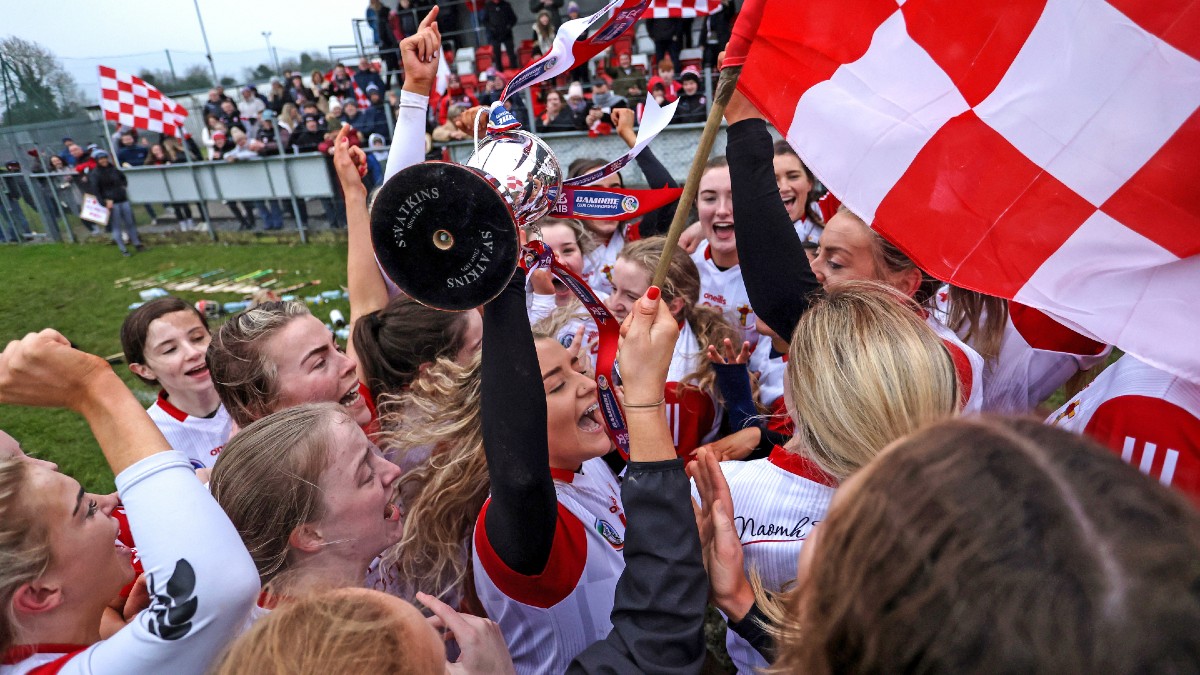 A goal from Naomh Treasa’s Cora McNulty 13 minutes into the second half of the 2020 AIB All-Ireland junior B club camogie final against Wicklow champions Knockananna was the key score that helped secure glory for the Tyrone outfit by 1-4 to 0-6 on cold day in Kinnegad.

It was a day too when St Rynagh’s and Gailltír qualified for the intermediate final in what will be a repeat of the last pairing but Naomh Treasa were the headline act.

McNulty’s strike was made possible by a searing run from Roísín McErlean, who collected the player of the match award much to the delight of the large crowd that made the journey from Dungannon for this dogfight of a battle, and it was the score that changed the face of the game.

Knockananna will wonder how this one got away from them. Defensively they were very sound, that McNulty goal aside, with super performances from Áine Byrne at full-back, Emily Hadden at centre-back and Jessie Byrne, who was tasked with curtailing the dangerous McErlean and did so relatively effectively.

The problem for the Wicklow champions was the tenacity of the Naomh Treasa players at rucks and around Knockananna players when in possession. The Dungannon side had huge games from Grainne Rafferty, Beth Jones, Áine McNulty and Caitlin McNulty and the Wicklow side just didn’t find any flow in attack.

It was never going to be a high-scoring game given the ferocity of both defences and Naomh Treasa proved very successful in slowing everything down and frustrating Knockananna, never allowing them time and space to hurl to their potential.

McErlean opened the scoring from a free after four, but Rachel Byrne replied and then added another to give Wicklow a 0-2 to 0-1 lead at the first water break. Sarah Byrne extended that lead after the restart, but Naomh Treasa struck back through McErlean and a pointed free from Cara Little to level matters. Eimer Mutton swung over a beauty to give Knockananna a one-point lead at the break.

Things were looking good for the Wicklow club, celebrating their 50th anniversary this year, when Laura Hogan rifled over a stunner but a McErlean free and McNulty’s goal transformed the game.

Knockananna started chasing the game but were found guilty of overcarrying and harvested a number of wides as the minutes ticked dangerously close to the end. The lively Byrne brought it back to a one-point game but the day belonged to Naomh Treasa.

Gailltír are a game away from a memorable two-in-a-row in the intermediate championship and on the evidence of their emphatic 4-14 to 0-5 victory over Clarinbridge at the GAA National Games Development Centre in Abbotstown in which Alannah O’Sullivan and Anne Corcoran posted two goals each.

The champs tore out of the traps and led at the interval by 2-6 to 0-2. Aoife Fitzgerald shot three points as they moved four points clear early on, Carrie Dolan slotting a free for Clarinbridge.

O’Sullivan had also gotten on the scoresheet for Gailltír and she bulged the net after a quarter of an hour. Ciara Jackman was forced into a good save but when O’Sullivan planted her second goal, it was looking tough for Clarinbridge.

The Galwegians could offer scant attacking threat however, whereas the constant movement and pace of the Gailltír forwards created a host of opportunities. Corcoran was the chief beneficiary in the second half, helping herself to her two goals and not even the introduction of a number of substitutes slowed the scoring rate, the likes of O’Sullivan, Shauna Fitzgerald and Clodagh Hoctor pointing for the two-tone Blues.

Nine points from Kate Kenny and a brace of goals by Mairéad Daly were among the features as St Rynagh’s cantered to a comfortable 3-15 to 1-3 victory over Eglish at the Templeport St Aidan’s grounds in Cavan.

The Offaly side were never under threat and led at half-time by 1-11 to 0-1, Daly’s first goal arriving in the tenth minute and Kenny splitting the posts six times, five of those scores from play. Helen Dolan and Linda Sullivan registered a pair of points each and it was plain sailing.

Daly raised a second green flag two minutes after the restart to banish any prospects of what would have been a very unlikely comeback but Eglish never stopped fighting, with the Tyrone side’s Armagh star Ciara Donnelly goaling in the 44th minute.

The Saints have far too many big guns for the Ulster girls however and Kenny and Siobhán Flannery responded before Róisín Egan slammed an injury-time penalty to the net and Kenny concluded her scoring, ensuring the Banagher contingent would sign off 2021 in style.