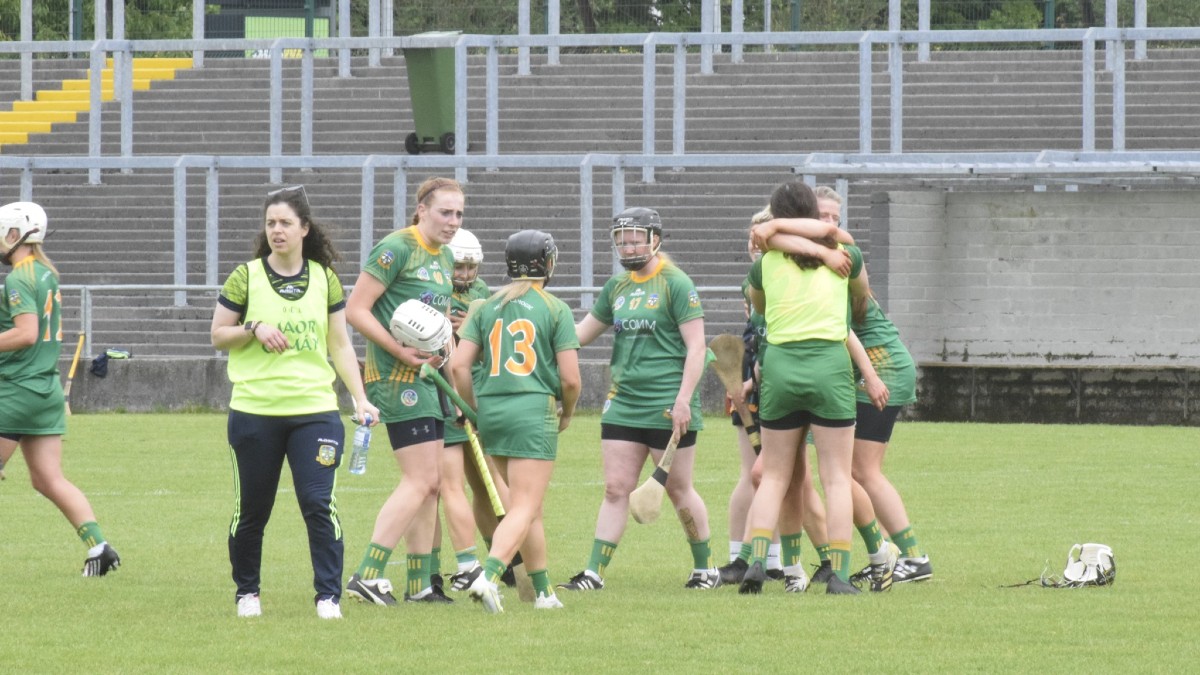 As dramatic finishes go, there’ll hardly be any better than this in 2021 as Meath salvaged a stunning win when the cause looked lost.

Máire Kirby was the hero, being on the end of a sliotar rolling dangerously along the Kilkenny line in the sixth minute of added time to take victory for Brendan Skehan’s charges.

Their resilience paid off, twice coming back from near hopeless positions.  After trailing 1-6 to 0-4 at half-time, two goals within four minutes of the restart from Megan Thynne and Jane Dolan overturned the deficit.

Again Kilkenny hit hard with four unanswered points but three more for the Royals kept them within reach.  Two white flags for Sophie O’Dwyer seemed to signal surrender but two frees put Meath within range and Kirby finished off a last gasp move for safety.

This was expected to be tight.  Indeed, only one point separated them in March 2020 when Meath were unbeatable in that league before COVID-19 changed the sporting landscape.

However, Kilkenny had gone through numerous changes since the pandemic robbed them of their championship aspirations with 10 changes from that contest 15 months ago.

Ciara O’Keeffe hit the target for John Scott’s team within 10 seconds of the throw-in before Amy Gaffney cancelled out that effort before we’d completed the opening minute.

It was end-to-end as both teams tried to supply their inside lines but they couldn’t shake the other off.  Dolan won a free for Meath which she converted before Áine Phelan made it 0-2 apiece on seven minutes.

The second quarter was a much more open affair and Meath could have struck the first blow on resumption as Kilkenny’s defence managed to deny Dolan a golden chance.  The Blackhall Gaels scorer-in-chief did receive some consolation when she put over the resulting 45.

But Meath, who’d struggled for scores in their previous two outings against Westmeath and Dublin, wouldn’t trouble the umpires again before half-time.  O’Keeffe levelled for the fourth time before the first decisive score came on 26 minutes.

Hannah Scott and Quigley found a way to unlock the resistant Meath rearguard laying siege at goal before the former’s cross on the edge of the small parallelogram found the stick of Ciara Phelan who left Maggie Randle no chance.

The Noresiders sensed their chance and stretched the lead.  The two Ciaras (Phelan and O’Keeffe) played provider to allow Áine Phelan put them ahead before O’Dwyer’s free gave Kilkenny a five-point interval advantage.

Kilkenny had only conceded one goal in total in their previous outings against Wexford and Laois; while Meath had scored one throughout their three games so far.  Studying the form proved a futile exercise as those stats were ripped up within four minutes of the restart.

After just 40 seconds, Kristina Troy sent in the delivery and Thynne was put through for Meath’s first goal.  And when Amy Gaffney found a way through the opposing defence three minutes later, Dolan made her mark and suddenly it was 2-4 to 1-6.

That being said, Meath hits critical spurts before running dry again and didn’t find the target again for 13 minutes.  Kilkenny finally settled down for their second half duties starting with Scott levelling affairs on 35 minutes.

O’Dwyer took on a more influential role during these 30 minutes and registered a placed ball to move her team ahead; before taking Áine Phelan’s pass on 40 minutes from play to put the black and amber 1-9 to 2-4 ahead.

The same due repeated the trick again on the three-quarter mark as a foul on Phelan allowed O’Dwyer split the posts.  But a Thynne minor before the water break kept Meath in the hunt.

Captain Troy launched over a long range effort when play resumed and when Coleman won a free on 50 minutes, Dolan did the necessary.

But the green and gold still only had nine scores over an hour and O’Dwyer looked to have finally delivered the victory with her two late points.

However, two points is a dangerous lead in any sport and Kilkenny are now feeling the full effects of losing that.  Meath found a way, Kirby found a way and they join Antrim, Down and Wexford in the Division Two semi-finals next week.