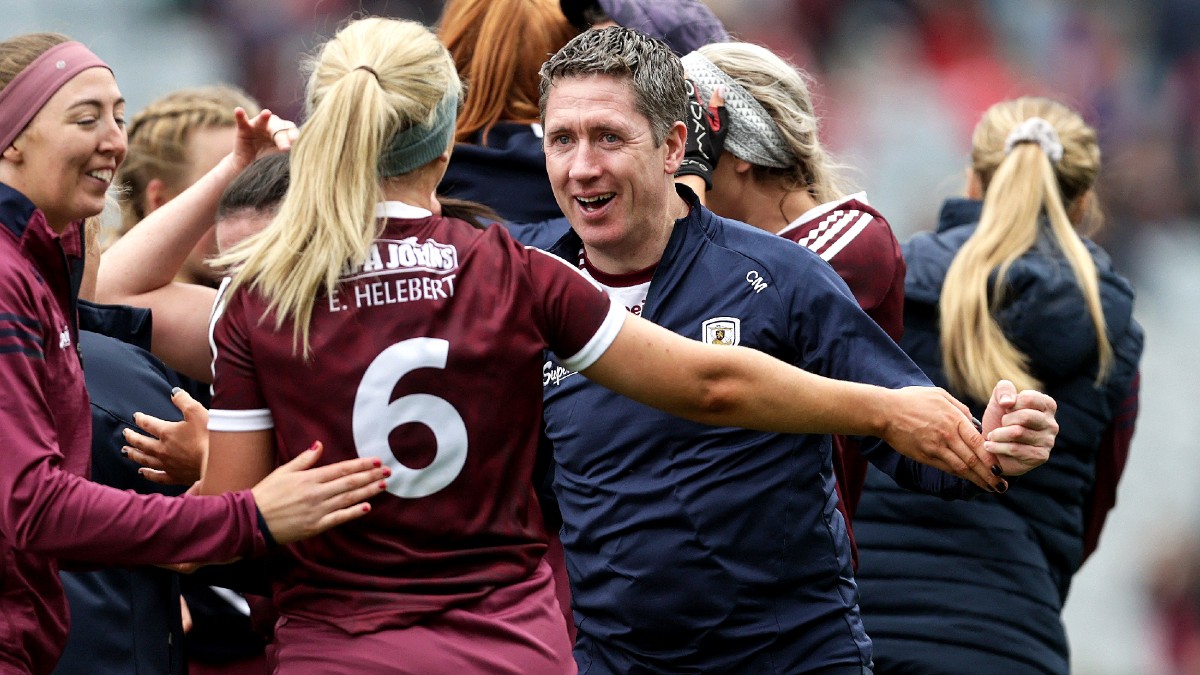 Cathal Murray was brought in to give Galway a harder edge and get them over the line after a series of near misses and the Sarsfields man has delivered in spade, the westerners finishing strongly to claim a second All-Ireland title on his three-season watch from three consecutive final appearances.

Like everyone else, Murray was impressed by his players’ response as they fell a goal behind after Katrina Mackey’s 49th minute howitzer, having led for most of the game thanks to scoring the opening four points.

The outstanding Hannah Looney and Ashling Thompson had driven the Rebel fightback, and Orla Cronin also performed exceptionally having been cleared to play by an interim stay from the DRA in the early hours of the morning.

But Siobhán McGrath’s 57th minute goal swung the momentum back in Galway’s direction and her sister Orlaith drove over the last two points to seal the deal.

“Their reaction to the goal was massive,” said Murray. “I think that was the first time Cork led in the game and went 1-11 to 0-11 points up. There’s plenty of places in Croke Park if you want to after a score like that.

“But the players stood up. We talked about if something like that happens in a game, it’s all about our reaction, and our reaction was super. I think we outscored them 1-4 to two points the rest of the game. That’s what won it for us but all day, the workrate, the aggression in the tackle, the intensity – that’s something we said we needed to bring today if we were going to beat a team like Cork.”

Murray made a big call in organising a reunion of the 2019 midfield pairing of Aoife Donohue and Niamh Kilkenny, and while the battle with Looney and Thompson was worth the entrance fee alone, Donohue finished with the player of the match award to justify the decision.

“It was a brilliant battle because they all contributed and all got on a lot of ball. Hannah Looney in particular was very influential in the first half but Aoife deserves huge credit for getting the better of that battle in the second half.

“We just brought Niamh Hannify on at half-time, we felt that we needed a stabilising influence around midfield, she did really well on Ashling Thompson. Niamh going to centre-forward was a big thing as well, she got on a lot of ball from there.

His Cork counterpart, Paudie Murray was understandably disappointed after a tremendous effort by his young team but admitted that Galway might just have deserved to get their hands on the O’Duffy Cup.

“Fair play to Galway,” said the Rebel Murray. “Probably over the hour the better team. Their conversion rate was much better than ours. It comes down to putting scores on the board, we were second best in that area.”

He felt that perhaps his players retreated rather than going for the jugular after Mackey’s major but credited Galway in cutting out a couple of other potential goal opportunities throughout the game.

“You could say that was good defending. Hand-passing a ball over a person’s head is probably not the right option to do, but look I am only grasping at straws. This Galway team has been around. I have been saying for a while they have been the best team, ran by a very good management set-up.

“I have good time for Cathal. Disappointed for myself, but happy for him. They are going to be around (for a while). Physically they are much more advanced than us. We are a young team so it is an area we need to brush up on, but at 20, 21 years of age, it is going to take them another couple of years to develop.”

There seems no doubt that both these sides will be around for a while, given how they exhibited the standards that have gone through the roof in recent times, and the clear benefit of the new rules introduced last year that has allowed the players the latitude to do so.

The vanquished manager was generous in the praise of the man in the opposite dugout and the winners, but he was accurate too. Prior to Cathal Murray getting the call up, Galway only had two All-Irelands, both under the management of Tony Ward. Now that tally has been doubled and as the most consistent Galway team we have seen, they must surely be considered among the greats of the game.

“I think they’re the most successful Galway team we’ve had,” noted the winning manager. “There’s no debate there. To win two All-Irelands in three years is really, really special. For me, any of the great teams have done it back-to-back, that’s my own opinion. You look at Wexford and the three-in-a-row, you look at Cork in ’14, ’15 and ’17 and ’18, they did it back-to-back. I think that’s the challenge now for this team.

“But look, Tipperary are coming, I don’t think they got the credit they deserve. There was a lot of talk about our semi-final and how we only beat Tipp by four points – if you go out and beat Tipperary by four points, that’s a really, really good performance.

“Kilkenny won the minor, were in the intermediate final today, they’re coming as well so it’s going to take a lot of work to stay ahead of the rest. But it’s great to be up there. But yeah, we probably need to win another All-Ireland if we want to be called a great team.”

That’s for another day.