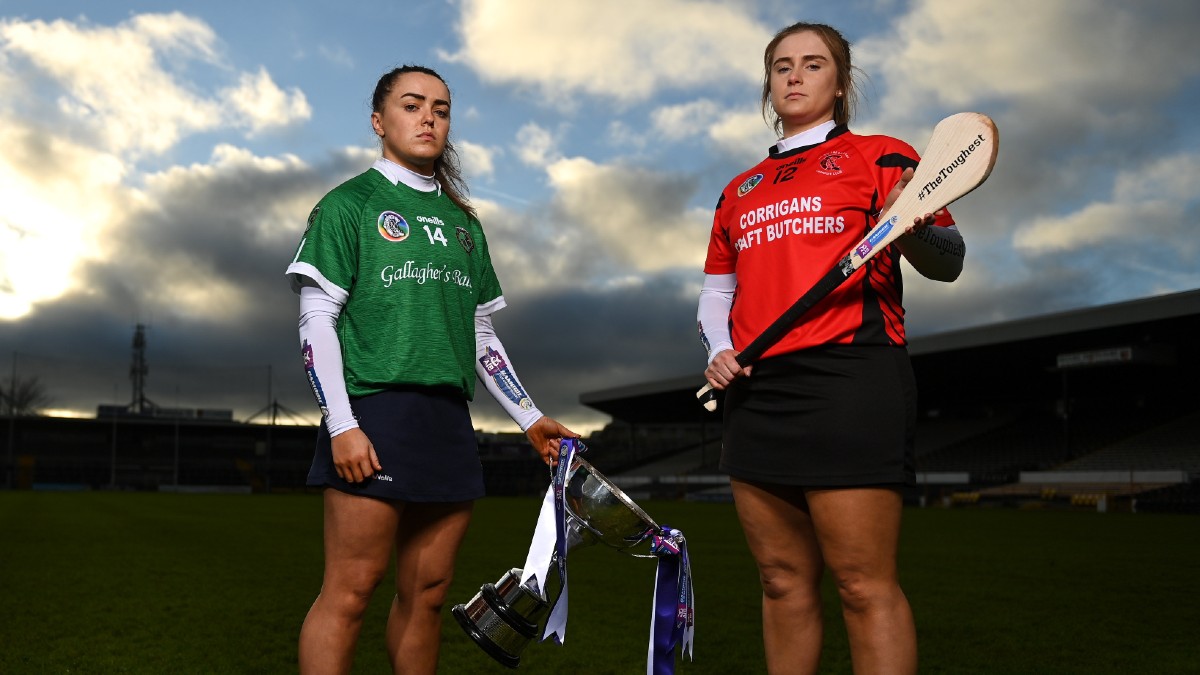 The AIB All-Ireland Senior Club Camogie final will be a repeat of the 2020 decider before Christmas, when Oulart-The Ballagh dethroned Sarsfields, after the two teams qualified once more in starkly contrasting fashion.

The titleholders cruised to a 3-11 to 0-2 victory over Scariff-Ogonnelloe, while Sarsfields came out on top in the latest episode of a captivating rivalry with Slaughtneil, edging a 2-4 to 0-9 triumph over the perennial Ulster champions and former three-in-a-row All-Ireland winners after extra time.

As with most games that survived the triple threat of storms, the conditions were atrocious but that didn’t stop Sarsfields and Slaughtneil in particular serving up a treat, the westerners’ goals earning them the verdict in the rescheduled tie at the Naomh Éanna facility in Gorey.

Siobhán McGrath and Tina Bradley were the scorers as the winners led by 0-3 to 0-2 at the interval, but Louise Dougan brought the teams level for the third time with a trademark long-distance free in the second half, and in a game of few scores, Bradley’s pointed free with nine minutes left would have left Slaughtneil supporters feeling very hopeful.

They were rocked by a goal from the puckout however, Shannon Corcoran providing a resounding finish to reward a tremendous passage of play by Orlaith McGrath. The Galway star won possession from a ruck and soloed through the heart of the maroons’ defence. Just as she lost her footing and looked to be held up, she somehow offloaded to Corcoran, who shortened her grip to avoid the hook and lashed to the net.

Slaughtneil displayed all their renowned grit though. Bradley (free) reduced the gap to the minimum, and Shannon Graham equalised in injury time after tremendous work by Aoife Ní Chaiside and Sinéad Mellon to make it 1-3 to 0-6 before Ray Kelly signalled time and the requirement for more action.

Bradley drove over a brilliant point from a free to give Slaughtneil an early lead but after Corcoran was fouled at the other end of the field, Siobhán McGrath rifled the resultant penalty low to the net. Her sister Orlaith followed up with an excellent solo score to make it a three-point game at the break.

Once again, Slaughtneil dug deep into their reserves and two pointed frees by Dougan got them within one but time ran out on them and Sarsfields held on.

At Clonmel Commercials, Oulart-The Ballagh used a strong wind to establish a 1-7 to 0-0 interval lead and once goal machine Úna Leacy scored the first of her two second-half majors early after the resumption, the life went out of Scariff-Ogonnelloe.

Ursula Jacob, who is now just a game away from emulating clubmates Karen Atkinson and the Leacy sisters, Mary and Úna, by captaining club and county to All-Ireland glory, hit a delightful goal on the way to totting up 1-5, finishing brilliantly after Katie Gallagher beat three defenders with a fantastic run.

Jacob and Stacey Kehoe were among the point scorers too but Scariff-Ogonnelloe would still have hoped that the elements might help them get back into proceedings if they could create a goal. Instead, OTB isolated Úna Leacy on the edge of the square and when she rippled the net for the first time, there was no way back.

Anais Curran was outstanding as the red and blacks kept driving forward, Úna Leacy controlling the midfielder’s pass sensationally before finishing resoundingly for her second goal. Aisling Corbett’s two frees were all the Clare champions could offer in reply, though Jennifer Daly was among those who tried hard throughout.

In the intermediate championship, another Galway side Salthill-Knocknacarra will play champions St Rynagh’s, after defeating Portaferry (Down) by 0-10 to 1-4, Rynagh’s having overcome Gailltír of Waterford by 2-11 to 1-11.

Meanwhile, Clanmaurice of Kerry gained revenge for their defeat in the junior final by Raharney, to see off the Westmeath crew by 0-10 to 1-5 after extra time. They will play either Athleague (Roscommon) or Eoghan Rua (Derry), whose semi-final fell foul of the weather.