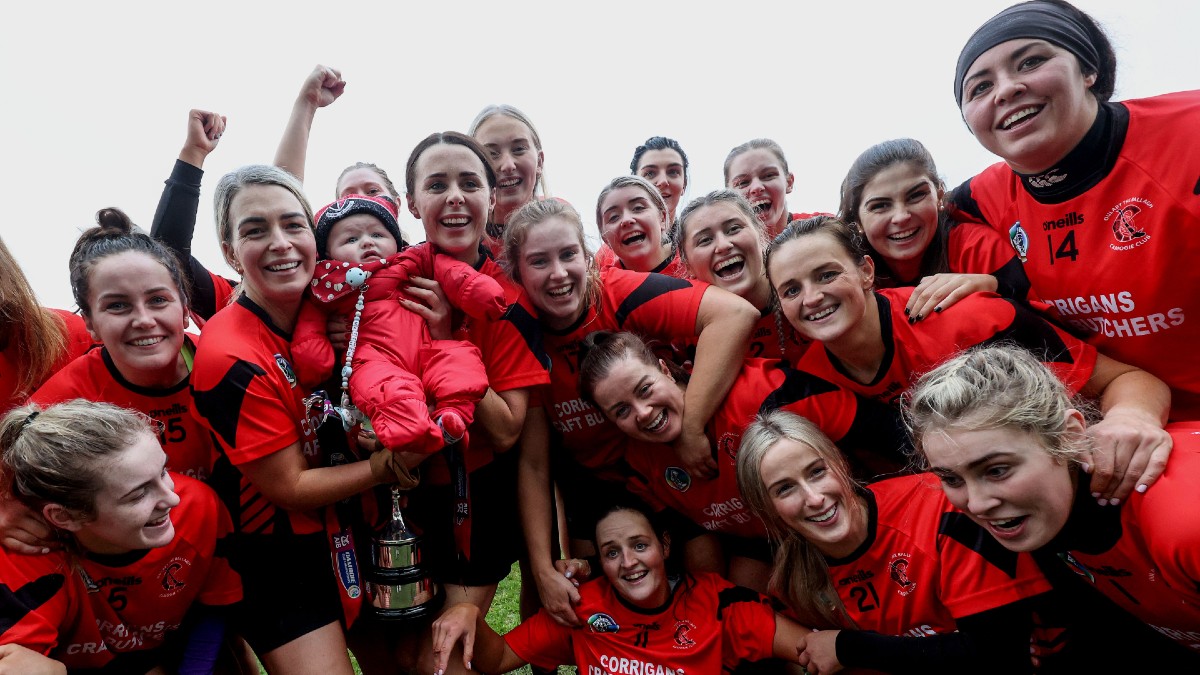 Just twenty-four hours earlier, Stacey Kehoe was walking up the aisle. Now, she was thundering into challenges, having swapped a white dress for red and black jersey and shorts, high heels for football boots, and a bouquet of flowers for a hurley.

The midfielder covered every blade of grass as Oulart-The Ballagh won their third AIB All-Ireland senior club camogie title, Kehoe and many of her illustrious teammates among the survivors from the initial one in 2012.

Úna Leacy stole the headlines with a phenomenal hat-trick of goals, the two in the second half ensuring that Sarsfields would always be kept at bay as they attempted to turn around the 2-4 to 0-1 quarter-time deficit that was still 2-7 to 0-4 at the interval.

But it was Kehoe who had the player-of-the-match award to go with her medal and a sparkling ring from a memorable weekend indeed.

In truth, it was a stunning team performance, with so many of the match-ups going the winners’ way and some of the newer members of the squad standing up to be counted along with the more established operators such as Kehoe, her twin Shelley, Leacy and her sibling Mary, the victorious captain, Ursula Jacob and Anais Curran. Aideen Brennan and Aoife Dunne were outstanding too but this was all about the unit.

Leacy scored an absolutely sensational goal in the tenth minute after good work from Jacob and Shelley Kehoe followed up two minutes later, after Sarsfields goalkeeper, Lauren Glynn had made two brilliant saves.

Glynn would make another fantastic stop from Úna Leacy but the full-forward would respond with ideal timing to Sarsfields goals from Siobhán McGrath and Klara Donohue after the resumption to maintain a gap that was needed as the dethroned champions fought desperately to retain their grasp on the Bill and Agnes Carroll Cup, with four points in succession from Orlaith McGrath (two) and her sisters Siobhán and Niamh bringing it to four before Shelley Kehoe had the final say after forcing a turnover.

“Whenever we needed the goal, the girls popped up the far end,” remarked Stacey Kehoe. “We kept at it, kept plucking away at the scores. One to fifteen, and whoever came on, the whole panel, everyone put their arms, their legs, everything on the line and it paid off.

“We break it down to each 15 minutes at a time. The biggest thing we concentrate on is the rucks. Whether it’s a hurl, an arm or a leg, as long as we get the numbers on the break and we come out with the ball, we don’t care who wins it, as long as we get possession.

“We gave Sarsfields the respect they deserve as All-Ireland champions but we know we’re a good team. Everyone believes in each other and that’s what got us over the line today.”

The Wexford representatives showed a voracious appetite for work.

“That came from the Thomastown game (Leinster final) when we were two points down and did dig deep and pulled it out of the bag. That belief and the momentum we gained brought us on each week. It’s easy to get over the line when the performances are coming each week.”

Remarkably, Oulart-The Ballagh will be defending their title early in the New Year, with the All-Ireland series for the 2021/2022 campaign getting under way.

“We’ll have a break at Christmas and we’ll regroup in January and go again. We know days like this don’t come around too often but when you get the taste of winning and have that hunger, it’s easy to continue going training.”

For now though, Stacey Kehoe more than anyone, is entitled to celebrate.

“What a 24 hours we’re having,” said the grinning No 8. “Days don’t get much better than this: get married yesterday and get over the line today in a club All-Ireland.

t was just like old times as Oulart-The Ballagh blitzed champions Sarsfields in the opening quarter to wrestle the AIB All-Ireland senior club camogie title from the westerners’ grasp in stunning fashion at UPMC Nowlan Park.

Úna Leacy and Shelley Kehoe shot first-half goals in a repeat of the type of start that accounted for Slaughtneil in the semi-final and with a commendable performance of efficiency and energy that included Leacy completing a second-half hat-trick, there was no way back for Sarsfields, hard though they battled.

It wasn’t an ideal preparation for such a big game for the dual-parish outfit, who were bagging their third crown, having secured their first in 2012 when Leacy was captain.

This time around, it was her sister Mary who got to lift the Bill and Agnes Carroll Cup, and the siblings joined clubmate Karen Atkinson, on the bench on this occasion, as individuals who had captained club and county to ultimate glory.

The feat was achieved despite many of the players attending yesterday’s wedding of midfielder Stacey Kehoe, a twin of Shelley, but there was no hint of physical or mental lethargy as they took it to their opponents from the off in ideal conditions, with Stacey named player of the match after a sterling display.

Sarsfields actually struck the first point, from a Niamh McGrath free after a foul on sister Orlaith, but at the water break, it was 2-4 to 0-1 and the champions were on the ropes.

Stacey Kehoe and Anais Curran gained the upper hand around the middle to ensure a constant flow of gall towards Leacy and Ursula Jacob, while Orlaith and Siobhán McGrath were starved at the other end.

Another Wexford All-Ireland-winning skipper, Ursula Jacob levelled from a free and Shelley Kehoe had OTB in front, when Leacy, bandaged like a mummy (as against a mammy, which she is) reminded us of the genius poacher she has been throughout a storied career, despite being beset by a series of horrific injuries and operations to both knees over more than 20 years.

It was a sensational finish in the tenth minute, befitting of the stage. Maria Cooney, operating in a sweeper role like Mary Leacy at the other end, allowed a high ball bounce off her palm and Jacob pounced, before hand-passing to her long-time partner in crime.

One touch were required to bring the sliotar under control, another to bring into her striking zone and the third doubled it to the net. Stunning.

The second quarter was about consolidation, Niamh McGrath slotting two points from play for Sarsfields, including one that whistled just over the OTB crossbar, but a wonder score by Shelley Kehoe was the highlight of the winners’ response as they went in at the short whistle leading by 2-7 to 0-4.

Sarsfields had the perfect start to their comeback bid with a Siobhán McGrath goal after her sister Niamh’s long delivery was dropped by Ciara Storey but Úna Leacy punctured the Galway side’s momentum when dispossessing Laura Ward and kicking to the net little over a minute later.

The margin was still eight points at the three-quarter mark but when Klara Donohue’s mis-hit shot somehow ended in the OTB net, it was game on once more.

But Leacy wasn’t finished and she racked up the hat-trick with a thunderbolt off the sod two minutes later.

Sarsfields would not yield easily however, displaying the heart of champions, with four points from the McGraths Orlaith (two), Siobhán (one) and Niamh (one) but Shelley Kehoe had the final say.