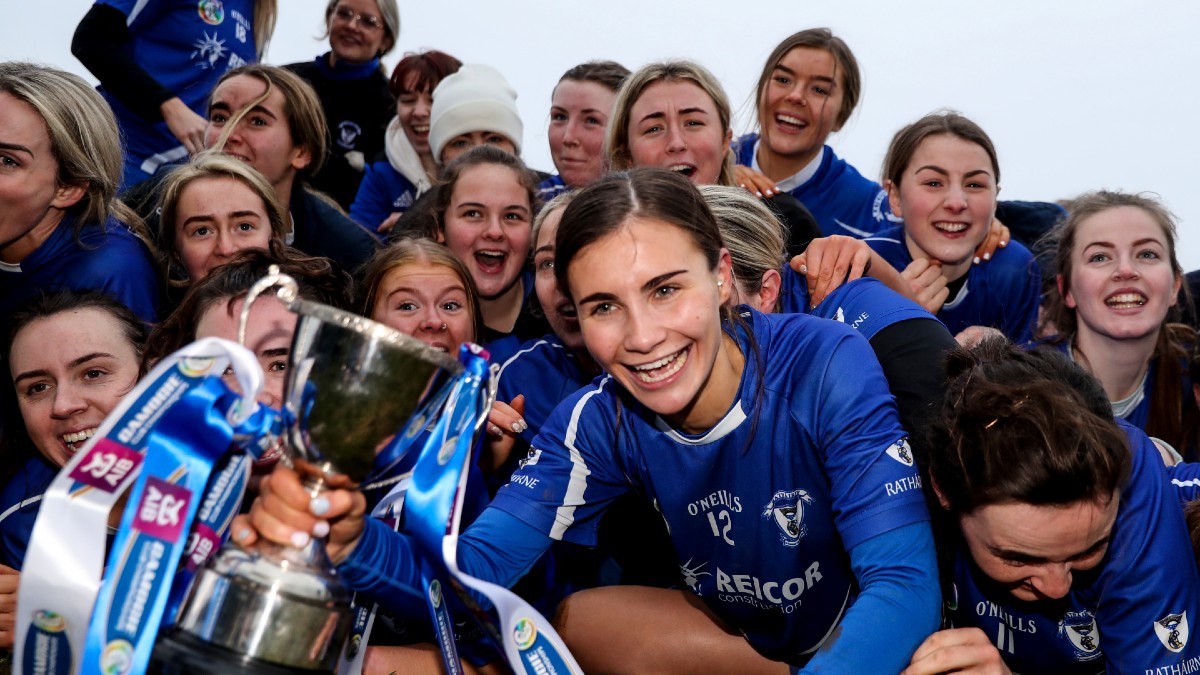 Six points without reply having fallen behind for the first time just after the interval finally ended the Clanmaurice reign and secured the 2020 AIB All-Ireland junior club camogie title for Raharney at the Longorchard grounds of Moyne-Templetouhy.

Hannah Core provided the first two of those points and her fifth minute goal was also a critical score. Meanwhile the stunning saves by Anna Weir from Jackie Horgan and Patrice Diggin were as important as any moment in a wonderfully contested game.

This was a repeat of the 2019 final, which Clanmaurice won in a replay having trailed late on in the drawn game. Their personnel issues going into this encounter were well publicised, as their only named substitute, 2019 skipper Liz Houlihan was eight months pregnant.

Raharney could no longer call on the legendary Pamela Greville, who has retired, but their depth and ability to call on reinforcements from the bench might have been a significant factor in the end.

The winners’ game plan was evident from the throw-in, as they targeted the diminutive but pacy Core. The full-forward took on Niamh Leen and made space with a snake-hipped body swerve but shot wide.

She made no mistake with her next chance though, with her ground shot evading the advancing Aoife Fitzgerald.

Core had used her low centre of gravity to emerge from a ruck of players on the 20m line with possession. Sara Murphy did well to force a mis-hit of the first attempt with a hook but Core was quickest to react and send the sliotar nestling in the Clanmaurice net.

Amelia Shaw drove over from a 55m free soon after but the champions created a number of chances of their own that they were unable to avail of before Jackie Horgan got them off the mark from a placed ball to leave that goal between them at the water break.

A few stern reminders must have been issued as Clanmaurice began to establish a foothold around the middle third, though still not operating with the precision they would have wanted in the second quarter.

Weir recovered from a fumble to clear well after the restart and Aoife Behan shot wide from close range. Horgan had the best chance in the 26th minute though, having been relocated to full-forward after picking up an early yellow card.

Murphy drove out of defence and delivered long. The Lismore-based teacher caught the sliotar brilliantly after ghosting in behind Jade McKeogh but her low shot from 13 metres was deflected around the post sensationally by Weir.

Horgan did convert the resultant 45 though and Diggin quickly followed up with a mammoth effort from her own 65, having spurned a few easier opportunities. Shaw and Horgan swapped points and it was 1-2 to 0-4 at half-time.

The North Kerry momentum continued into the second half, Horgan outmuscling two Raharney defenders to equalise after just 12 seconds and Jessica Fitzell, who grabbed the last-ditch equaliser to secure the replay in 2019, pushing the Blues ahead with a tremendous point from the right after the excellent Rachel McCarthy’s clearance.

Much has been made of Clanmaurice’s character but Raharney have illustrated that in spades too to return to the final, and with the likes of Weir, Mary Geraghty and Laura Doherty proving stubbornly unyielding, it was on show again as they responded to the challenge laid down with those next six points.

The first two arrived courtesy of will-o-the-wisp Core, whose threat on the vast Longorchard pitch was constant when Raharney could send it her way. Mike Enright switched McCarthy to pick her up immediately after.

Aoife Doherty split the posts at the three-quarter mark and Raharney led by two, 1-5 to 0-6 at the second water break.

Murphy was colossal as Clanmaurice went out on their shields but Raharney had just that bit more energy in the second half. Aoife O’Malley pounced on a break from Erin Core to extend the margin and when Shaw made light of a tight angle to make it a four-point game, with just over three minutes of regulation time remaining, Clanmaurice needed a goal.

Horgan’s aerial ability almost produced it, as she grabbed the sliotar from the clouds but her rising shot cleared the crossbar.

There was still time for drama as Weir spectacularly saved a venomous shot by Diggin from a 20m free, displaying otherworldly reflexes as the sliotar flew through a phalanx of bodies. With that, the Phil McBride Cup was changing hands.

Covid’s impact on the club championships is such that the teams could meet again in the 2021 All-Ireland semi-final in four weeks if they come through their provincial competitions but Raharney won’t be thinking about that tonight.