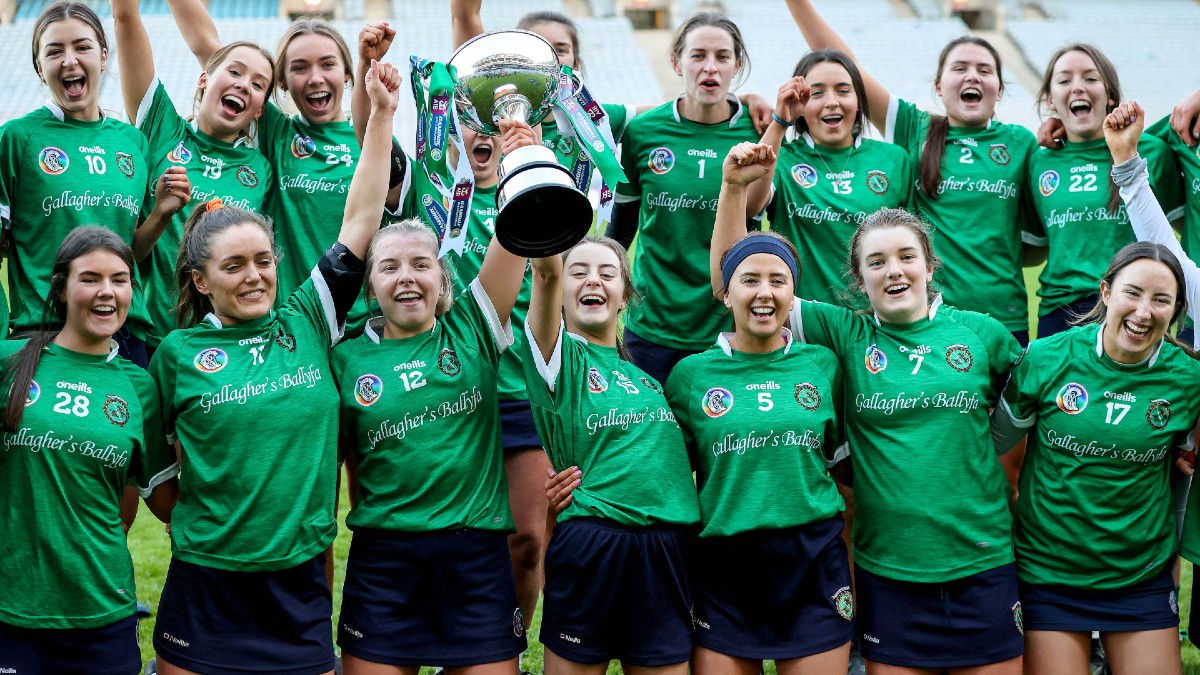 A scintillating performance by pocket rocket Siobhán McGrath was the headline act as Sarsfields gained revenge on their December conquerors Oulart-The Ballagh to get their hands back on the Bill and Agnes Carroll as AIB All-Ireland Senior Club Camogie Championship victors.

McGrath scored a goal and seven points, the goal coming into the same Davin Stand end in which she rattled to net to snatch All-Ireland glory for Galway last September, but at least as notable was the pocket rocket’s sometimes manic workrate, which forced a number of turnovers.

It was symptomatic of the controlled aggression and immense industry that Sarsfields brought to the game all over the pitch. They needed every bit of though, as Oulart-The Ballagh, who had dethroned the Galwegians in the 2020 decider played just before Christmas, would not go away, even though they were living on scraps at times with Niamh McGrath and Sarah Spellman contributing to a dominance around the middle third.

OTB kept trading goals with their rivals but just could not create anything like the problems they caused at UPMC Nowlan Park in their last meeting.

Ursula Jacob pointed a 45 for OTB in the fifth minute but by that stage, Sarsfields already had 1-2 on the board, with McGrath hitting a goal and a point. The goal arrived in the third minute, McGrath rounding Aideen Brennan and placing a shot to the far corner. Her sister Orlaith also found the target as Sarsfields looked to create plenty of space in attack in which to use their speed.

The red and black jerseys are full of experience though and with so many players who had been part of the club’s three previous All-Ireland successes, as well as Wexford’s four from 2007-2012, they were never going to panic.

That said, there was certainly an element of fortune to Shelly Kehoe’s 15th minute goal as her shot for a point dropped just under the crossbar as goalkeeper Laura Glynn collided with the upright while attempting to keep it out, just seconds after she had made an excellent save from Leanne Nolan.

Back came Sarsfields, and a 26th minute goal arrived from the unlikeliest of sources in Tara Kenny, who soloed in from the right. Her shot slipped from the grasp of OTB netminder Lauren Sinnott and crept into the corner of the net. Four minutes later, Sinnott made a double save from Sarah Spellman and Shannon Corcoran but was helpless when Cora Kenny finished to the net off the sod.

There was still time, however, for Oulart-The Ballagh to deliver a message, Úna Leacy blasting to the roof of the net after good work from Jacob, who drew the cover and slipped her long-time colleague in with a good hand-pass.

That made it 3-6 to 2-4 at half-time. Siobhán McGrath clipped over two quick points before Anais Curran drove a fantastic goal with a second attempt in the 38th minute after a blinding run and first shot saved by Glynn. Now, there were just four between them.

But Sarsfields were determined to secure a second title and not to lose a fourth final. They put the affair to bed in clinical fashion, with Siobhán McGrath in particular firing some outstanding scores from play, while also deadly accurate from placed balls.

Four points in a row doubled the margin and though Stacey Kehoe pointed with eight minutes of normal time remaining, Sarsfields defended resolutely and when Leacy bagged her second goal from a 20m free that was deflected to the net as the game ticked into injury time, it was too late to prevent the trophy heading west.

After collecting the Bill and Agnes Carroll Cup, skipper Niamh McGrath referenced the maelstrom of emotions the Sarsfields players had experienced in the past ten weeks.

From losing their AIB All-Ireland Senior Club Camogie Championship to Oulart-The Ballagh and then come through a titanic extra-time battle with old rivals Slaughtneil in the following season’s semi-final in the midst of a storm, they were back getting one over on OTB at Croke Park to reassert themselves as the premier club side in the land by a 3-12 to 4-5 scoreline.

Reflecting on it on the pitch afterwards, it was the harsh lessons they had been taught by Oulart-The Ballagh that were at the forefront of her mind, however. And it was evident from the opening exchanges, that everyone had taken them on board.

“We really were shown up big time in December,” said McGrath in a bracingly honest assessment of that game. “They absolutely hurled us off the pitch. We really put our shoulder to the wheel after that. I don’t think we’ve ever trained at such an intensity. We just put our standards up so much. They made us look at ourselves, so it’s great and the inside forward line were fantastic that way, tackling like dogs.”

McGrath shared the occasion with her three sisters Orlaith, Clodagh and Siobhan. The latter is one of the real leaders of this team, despite being the youngest of the quartet, supplementing a scoring return of 1-7 with phenomenal industry, forcing a slew of turnovers and covering most blades of the pitch.

“It was workrate that won it for us,” insisted Siobhán. “We didn’t match their workrate last December and we had to do that today. A good start is something we really targeted coming into it. Oulart-The Ballagh, every single game they’ve played, they’ve got unbelievable starts. We knew if we were to have any chance today, we couldn’t let them get a good start. We needed to get the good start ourselves.”

Siobhán may be short in stature but she is a real powerhouse. Always a threat with the ball, she was a nuisance without on this day, turning over Aideen Brennan three times inside a minute and leaving the full-back crumpled over after a particularly heavy tackle in those opening, frantic exchanges. This was a different Sarsfields.

The nominal full-forward had a goal in the third minute, into the same Davin Stand end she scored the crucial major to give Galway their All-Ireland last September.

“There must be a magnet down there or something ‘cos I don’t score many goals the other side! I found myself in a bit of space and when you’re one-on-one there, you have to make sure in games like this.”

Every time Sarsfields looked like pulling away, Oulart-The Ballagh hit back, Shelly Kehoe goaling in the 15th minute and then Úna Leacy grabbing her first after Tara and Cora Kenny had netted. That left it 3-6 to 2-4 at half-time.

But Siobhán McGrath just turned the screw with some sensational points from play and frees in the second half, while all around her, women in green stood tall, not least the likes of Maria Cooney, Tara Kenny, Laura Ward, Sarah Spellman, Niamh McGrath and Orlaith McGrath.

And yet, Anais Curran and Leacy raised green flags to ensure some doubt right down to the wire. But a fourth title would not be theirs. Sarsfields deserved this, hard though Oulart-The Ballagh resisted.

“When you have Úna Leacy and Ursula Jacob there, they’re special players,” said Niamh McGrath. “They’ll get a goal out of nothing and anytime it went in, your heart would be in your mouth but credit to our backs in the second half. I thought Maria, Laura and Tara – every one of them were super.

“Well we’ve been in five finals and we’ve lost three so we said we can’t lose another one. That’s not a good return. One out of five. It’s a special bunch. We really have grown up together since U10. It’s unreal. We are such a small place so to do this is unbelievable. We’ve a big few weeks ahead now!”

It is fitting perhaps, that the last word should go to Siobhán.

“The feeling when the whistle went, if you could bottle it, you’d never have a bad day again.”