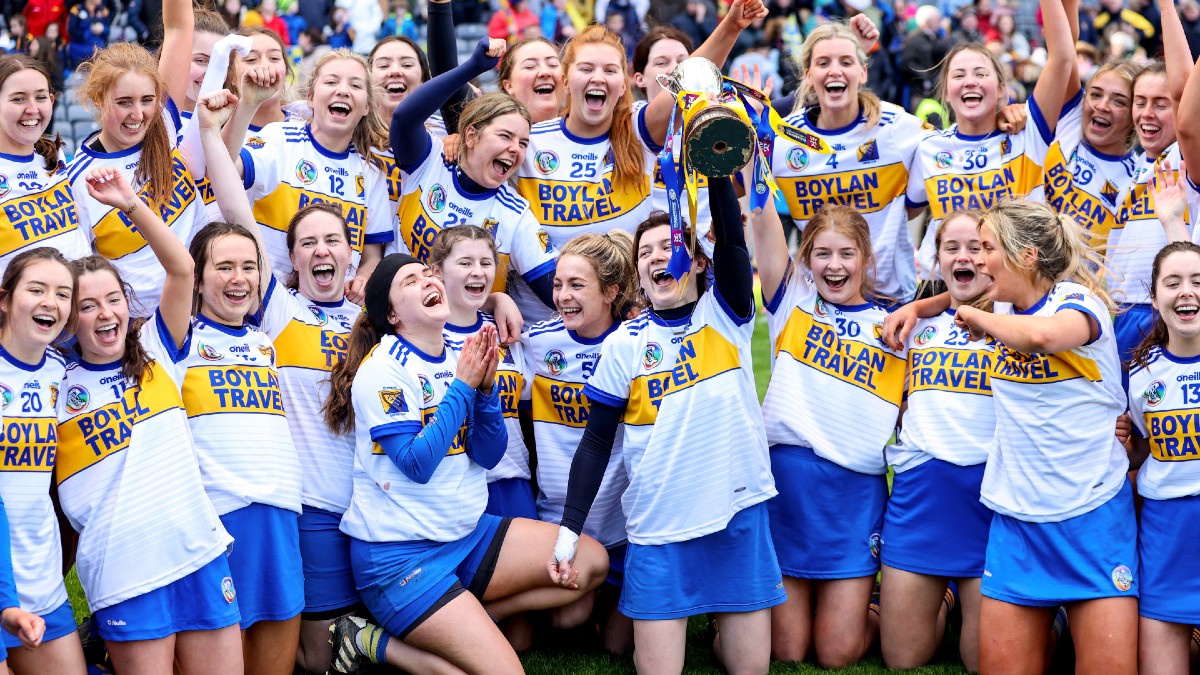 Two goals from Siobhán Flannery and a second consecutive player-of-the-match return by Kate Kenny in All-Irelands were among the many highlights as St Rynagh’s made it back-to-back AIB All-Ireland Intermediate Club Camogie titles and in the process, ensured that the next Offaly championship winners will be operating at senior level next season.

It always looked like a stiff task for Salthill-Knocknacarra against the hot favourites, with their joint captain Orla Callanan missing out due to a cruciate knee ligament injury.

It got even more difficult when Flannery snuck in behind the Galway city side’s defensive cover in the fifth minute to goal after good work from Linda Sullivan and when Emma Madden received her marching orders for a second yellow-card offence in the 22nd minute, there was no way back.

They earned a lot of fans by the manner in which they continued to battle all the way to the line, however, and a couple of late goals from Aisling Griffin and Sorcha McGinley were due reward for their efforts.

Indeed their entire full-forward line were responsible for their three first-half points, which told of a potential threat had they been able to get enough ball in, but Róisín Egan and Gráinne Dolan were powerful presences further out, ensuring the traffic went in the other direction.

And Rynagh’s had so much speed and movement, using the diagonal ball so astutely, that they seemed likely to score from every attack.

Kenny and Flannery added second-half goals and Kenny ended with a tally of 1-9, with some of her points a wonder of accuracy and clean striking.

At times it looked like Salthill-Knocknacarra would be overrun, with the Rynagh’s half-back line in complete control, and Vicky Flanagan made some tremendous saves before the goals came at the other end to put a better gloss on the scoreline.

There was never any doubt about the ultimate verdict though as the powerful Saints had done the damage and were able to cruise home.

Gráinne Dolan followed up a tremendous personal performance in a wonderful team display by being presented with the trophy as winning captain after the AIB All-Ireland Intermediate Club Camogie Championship final for the second time in two months.

While that first one was sweet, particularly having lost the previous decider to a late goal, getting to climb the Hogan Stand steps to get her hands on the silverware, having shone on the famous Croke Park pitch on the way to recording a 5-14 to 2-6 triumph over Salthill-Knocknacarra, made it all the better for Dolan and her teammates.

“Everyone’s dream is to come and play in Croke Park but to come and play with your club and your teammates that you’ve grown up with and played camogie with up along, there’s something so special about it,” said Dolan with an ear-to-ear grin. “To win here today, words don’t describe how unbelievable it feels.

“We were coming off a very heartbroken performance here two years ago, so we really wanted to make that wrong right and we really did that today and I’m so over the moon right now.”

Using their pace to create countless opportunities, and with the diagonal ball suiting tremendous movement up front, the Offaly crew created havoc. Siobhán Flannery, Mairéad Daly and Katie O’Connell hit first-half goals, with further majors coming after the restart from Flannery and the majestic Kate Kenny, who finished with 1-9, with only four points from placed balls.

“We learned from two years ago. I think the nerves got to us a little bit. We didn’t execute some of the plans we had in place. We knew how important it was to stick to the plan and just workrate, workrate, workrate from the very beginning. Everything we worked on in training, we just made sure that we brought every bit of that to the game.

“I’m just so glad. I feel it was such a complete performance.”

Dolan also praised how Salthill-Knocknacarra battled to the finish, Aisling Griffin and Sorcha McGinley hitting late goals, even though the Galway city side were down to 14 after last year’s Galway minor captain Emma Madden was sent off in the 22nd minute for a second yellow card.

Manager Mark Dunne is a Galwegian – former Galway star Molly is a key member of his management squad – and he had positive words for Madden and her teammates as well.

“That Salthill team deserved a lot of respect, and probably even more after the way they stuck at it in the end,” noted Dunne.

“We played some great stuff but they had a player sent off in a very unlucky situation but she’s a fantastic girl. I guarantee you, people are going to be hearing a lot more about that girl and she has done an awful lot to get the team here. I hope she doesn’t take that to heart and doesn’t let it knock her back. I think she’ll be stronger for it.

“I think they need to be massively commended. If you’re in Croke Park, your first ever time there and the scoring line tells you the game is over and they keep going. They did it in the hardest situation and they represented their club excellently.”

Dunne believes that not too many teams in Gaelic games have won 12 knockout games in succession, with so many league preambles to championship nowadays. The Covid competitions have altered the landscape temporarily however, and to deliver when it’s do or die is a tremendous sign of a team.

“We were put up as big favourites coming into it. We just had to block that out. We’d only gotten to this point by concentrating on our jobs day by day, minute by minute through the game.

“I thought our movement up front was exceptional early on, the pace we played at. They invited our half-back line and midfield to attack and we took the opportunity. All our half-back line got on the scoreboard and Róisín (Egan) in a sweeping role. The pace we have in that half-back line is a serious attacking threat. Not many teams at a club level have it. If you invite on Katie O’Connell or Emma Corcoran, Róisín Egan and a Gráinne Dolan, they’ll follow you up the field and hurt you. We probably had too much firepower in that situation.”

And hard though Salthill-Knocknacarra tried, that firepower told.