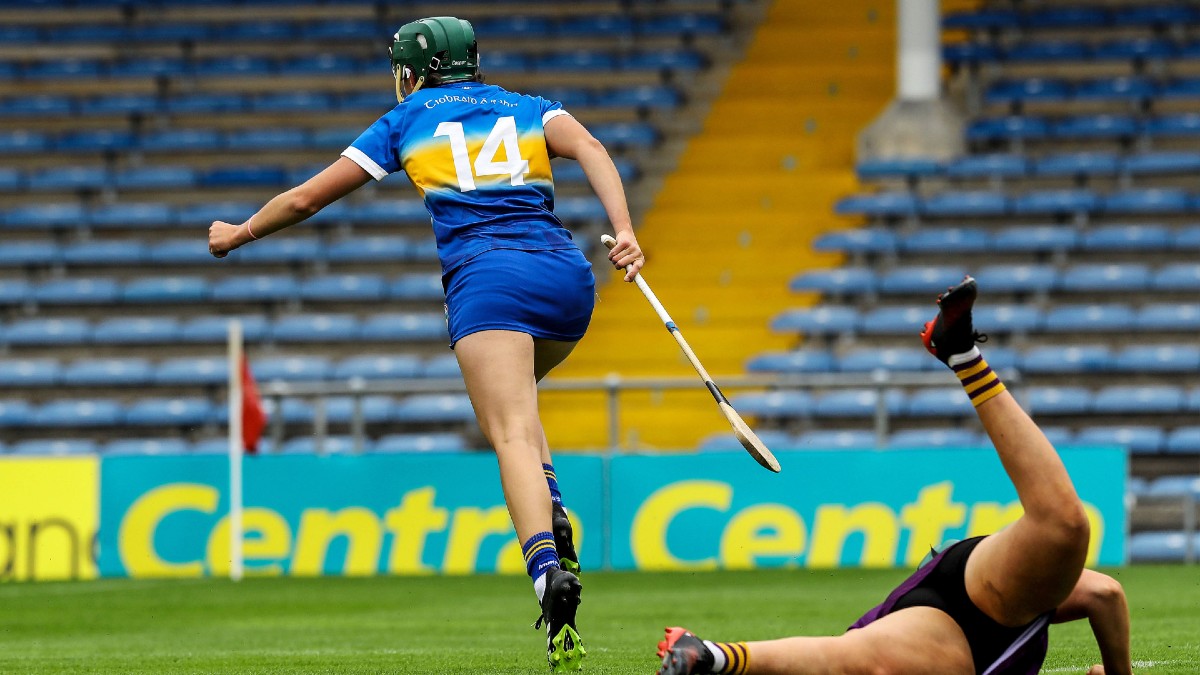 Late goals from Clodagh McIntyre and Eimear McGrath added gloss to the scoreline as Tipperary beat Wexford by 4-11 to 1-11 at Semple Stadium in the last of the weekend’s action in the All-Ireland senior camogie championship, though luck wasn’t on the side of the Premier County less than an hour after the final whistle when they were drawn out as the only group winner to have to play a quarter-final fixture.

Tipperary will meet Waterford and Kilkenny will play Wexford in a quarter-final double header on Saturday, August 21 at Páirc Uí Chaoimh in Cork, while Cork and Galway were drawn out to receive byes into the semi-final stages.

Meanwhile in the relegation play-offs, Down will play Offaly with the loser of that fixture going on to play Westmeath.

The Premier County have reached the semi-final stages of the championship in each of the last three seasons and they were quick to settle into their work this afternoon, with Cáit Devane finding the net in the fourth minute in response to two early Wexford points. Róisín Howard rounded the keeper and fired in a second with the water break approaching, but Wexford kept in the game, largely by getting plenty of bodies back behind the ball to stifle the Tipperary attack.

Nicole Walsh and Karin Blair hit the target for Tipperary from distance to edge them six points clear, only for Chloe Foxe to strike a goal from a penalty and put the result back in the melting pot yet again just before half-time.

The second half was a tense and tight affair, with Ereena Friday increasingly influential after coming off the Tipperary bench, and it took a superb save from Wexford’s Laura Brennan to deny McGrath a goal and keep the visitors’ hopes alive going into the latter stages.

McGrath made no mistake on the hour mark when she was picked out by a wonderful pass from Devane, and with Wexford’s resolve broken, McIntyre was able to tack on a fourth goal in stoppage time to confirm the win and top spot in the group in the process.

The meeting of 2020 All-Ireland finalists Galway and Kilkenny was the big game on Saturday, where Galway picked up a morale-boosting 1-13 to 0-15 win at John Locke Park in Callan.

The Tribeswomen will take incredible heart from the win, given that they lost corner-forward Catherine Finnerty to a straight red card after just 15 minutes.

Ultimately, Galway’s 1-3 without reply after half time, which helped them turn a three-point deficit in to a three-point lead proved to be the decisive period of this game. Siobhán McGrath found the net early in the second half to push her side into the lead, and a strong defensive effort was needed to keep the Cats at bay.

Denise Gaule was accurate from a number of frees while Mary O’Connell and Aoife Doyle also found the target to keep Kilkenny in the game and set up a dramatic finish. Kilkenny almost found a way through in injury time but some heroic last ditch defending during the four minutes of injury time helped Galway hang on to take the victory.

Cork didn’t have things all their own way against Waterford at Páirc Uí Rinn and fell behind to two early goals, but green flags from Katrina Mackey and Amy O’Connor in first half stoppage time turned the tide Cork’s way. Strong scoring performances from Fiona Keating, Orla Cronin and Mackey in the second half ensured Waterford were kept at arm’s length in a 2-18 to 3-9 win for the Rebels.

The other three games were relegation deciders, with Limerick, Clare and Dublin picking off vital wins over Offaly, Westmeath and Down respectively.

Limerick travelled to Banagher and while they led the whole way through the game, goals from Orlagh Kirwan and Mairéad Teehan kept Offaly in contention. It was tied at 0-15 to 2-9 before Caoimhe Costelloe’s eighth point of the game and another from Mairéad Ryan sealed the win.

Clare had just three scorers in their 2-12 to 0-12 win over Westmeath at Cusack Park in Ennis, but two of them – Eimear Kelly and Áine O’Loughlin – found the net in the first half to give the Banner women a solid platform and set up a junior and senior double for the county over the weekend.

Aisling Maher’s goal with five minutes of normal time to play at Páirc Esler in Newry was the crucial score in a 1-9 to 0-11 win for Dublin that preserves their senior status for another year.

Niamh Mallon replied to that goal with a point to cut the gap to the bare minimum from a close range free, and the Portaferry player had possession again at the death, chasing what would have been a crucial equaliser, but time ran out and so they must prepare for a playoff with Offaly to try and save their senior status, having played at the top level for the first time in over two decades this summer.