CAMOGIE: “The bond will always be there” – Imelda Hobbins 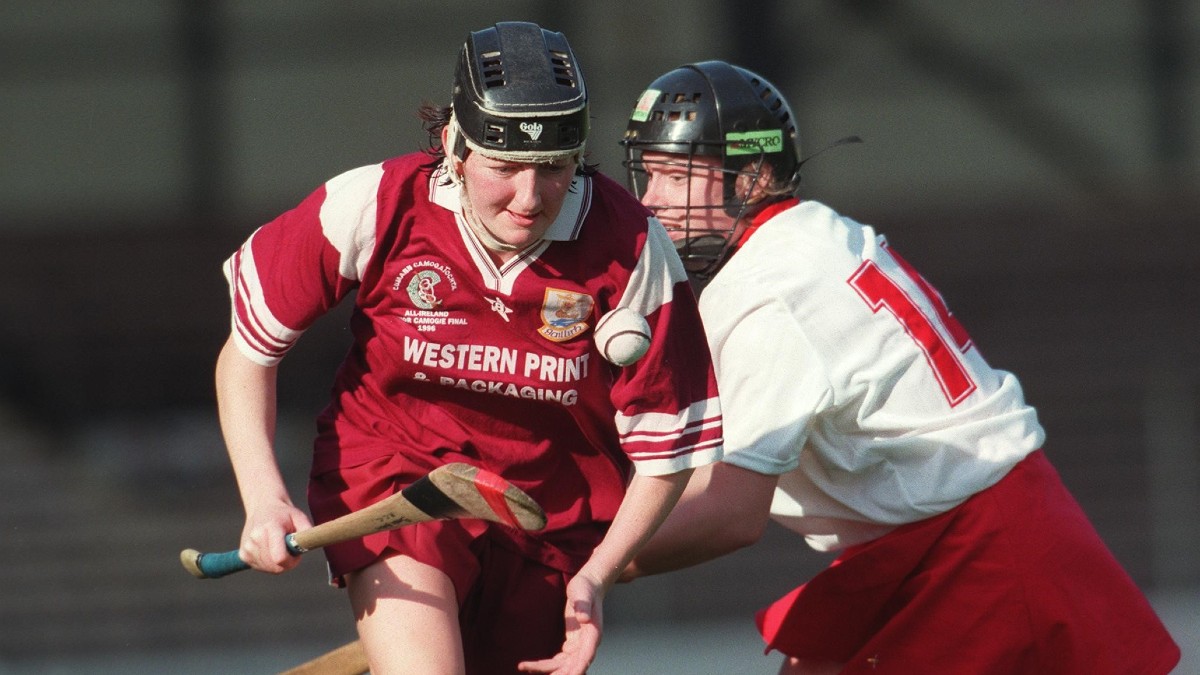 It is the throng of faces and the multitude’s din as they snaked their way home that Imelda Hobbins thinks of. More than the honour of being the first Galway captain to lift the O’Duffy Cup, more than the cherished medal.

The reaction took them all by surprise and it is among the highlights of an unforgettable occasions, as Galway defeated Cork by 4-8 to 1-15, to become All-Ireland Senior Camogie champions for the first time.

That 1996 landmark is now a quarter of a century in the rear-view mirror, making the western pioneers this year’s Jubilee team.

Which brings us to one of the other key elements of that squad, and what came from their historic triumph.

“It will be great to be honoured, to get out on the pitch but it’s to be able to meet up with the girls,” says Hobbins, which is how she will always be known, even if she is a Mullins now.

“It’s funny. You could try and do something like this yourself, but it’s hard to get everyone together. I think when Croke Park put this together and you’ve a chance to walk onto the pitch on All-Ireland final day, it provides more incentive!

“But most of the group will be there. We have a couple of overseas but other than that, we have a good crew which is great.

“It’s amazing. We spent so much time together. When you come back, you pick up where you left off. And you go straight back to the days of camogie. It’s back to the All-Ireland, the nights out, the different functions. ‘Remember when?’ All of these conversations start to flow back. There’s never an awkward period. It’s straight into chat.

“That bond will always be there.”

As a long-established analyst on Galway Bay FM, Hobbins will be rushing down from the media centre to accept the plaudits but she will undoubtedly be asked to reminisce on being the first winning captain. And it will be the journey west on Monday that will come to mind first.

“On the day after the match, (the manager) Tony Ward and the county board were doing the plan for coming home, what time we’d put on it. We didn’t leave early enough because we didn’t anticipate the crowds.

“It started in Athlone. We got off the bus and walked over the Shannon with the cup and there was a crowd there to meet us. And then, right through Galway. We would have done all our training in Loughrea, so we were aiming for that to be the main stop, where we’d have the crowd but my God, Ballinasloe was huge.

“We came back to my own club, Mullagh, and Gurtymadden where I’m from. Again, we were just expecting to pull up there, and me as captain pop off and say a few words. I don’t know how long it took us to get through. It was absolutely phenomenal. I remember bonfire after bonfire the whole way, ‘til we finally finished in Craughwell at 2am in the morning. And here we were, trying to kill time before we left Dublin as we didn’t want to be down too early!

“Galway Bay compared it at the time to the 1980 coming home for the hurlers, that it was nearly as big as that. And in camogie, we wouldn’t be used to it. But it was the first time to win it and then the county was starved for an All-Ireland win. It all came together.

“The amount of small kids in Craughwell at 2am in the morning was unbelievable, it would bring you to tears. It was so emotional.”

A multiple All-Ireland winner at schools’ level with St Raphael’s of Loughrea, Hobbins scored 2-3 as a secondary school student when Galway won the All-Ireland junior title in 1988. She progressed to the senior team from there, winning a National League medal in 1994 – Galway’s first national title and “a huge boost”.

She was vice-captain the following year to Sharon Glynn and so stepped up to the plate in ’96.

“I remember going to visit Sharon in hospital early in the year, talking about training and so on, and she said, ‘You’ll be captain this year and we’re going to win it.’ And I thought, ‘Oh God, I don’t think we’re going to win it!’ It just seemed so far away at that point. I was excited about being captain but I never thought I’d be lifting the O’Duffy.

“The big decider in ’96 was Cork beat us in the League final by 15 points. At that stage we would have Cork up on a pedestal. Tony Ward said, ‘If ye put ye’re heads to it, ye’re good enough to win the All-Ireland.’ He started talking and we realised, ‘We have to start believing in ourselves.’ After that, the whole intensity in training up. We knew we weren’t far off but we just needed to get our heads right.”

Even the morning of the final, with Cork in the opposite corner once more, Hobbins did harbour doubts. But Denise Gilligan removed those with her double strike.

“It’s hard to explain it. It was 12-a-side at that time, but when you play with girls, you can feel it. You know when things are going right and when they’re not. When that first goal went in from Gilly, you could feel the whole urgency through the team.”

It was exhilaration at the final whistle and then the presentation. The euphoria is evident in photos as Hobbins lifted the trophy aloft. She is cemented in history as a result.

And now, here they are back at Croke Park to be feted, 25 years elapsed. Different, but the same.

Tickets for Sunday’s All-Ireland Final triple header can be purchased at ticketmaster.ie.