CAMOGIE: “There’s always a joke and a mess about it. We don’t play Rynagh’s too often in the football but when we do, it’s funny” 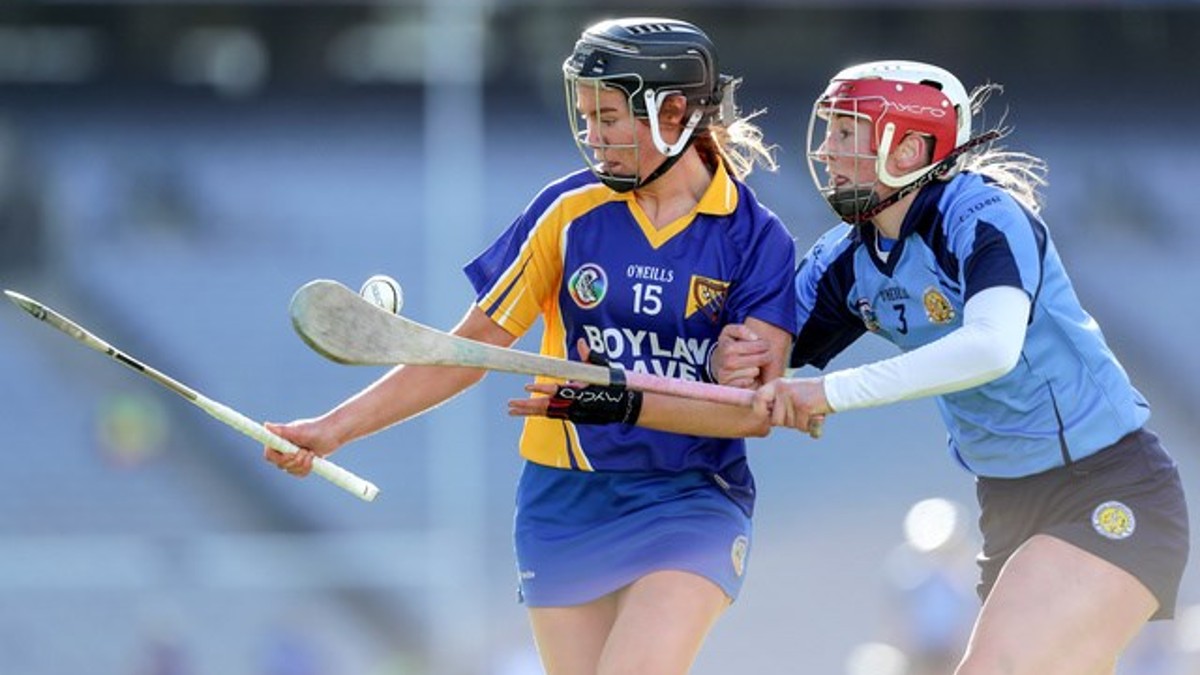 There is a growing tendency to label anyone operating in both primary Gaelic games codes a dual star but Kate Kenny is authentic.

Not just good enough to play at adult level for Offaly in both camogie and ladies’ football, Kenny does so on an elite sphere, as evidenced by being named the Faithful County’s 2018 player of the year in both spheres, while still only 16.

The Ferbane native went on to help local club Naomh Ciarán secure the All-Ireland intermediate football crown at the end of 2019, scoring eight points in the final against Naomh Pól, half of them from play.

There was a fly in the ointment though, as her camogie club, St Rynagh’s, had led by a point going into injury time in the AIB All-Ireland intermediate decider the previous March, only for Gailltír sub Úna Jackman to smash their net and their dreams as they lost by three in the end.

Rynagh’s and Kenny have made it back for the 2020 decider, being played at Semple Stadium tomorrow (1.30pm – Live Stream Camogie YouTube), the 20-year-old slotting nine points in the semi-final victory over Eglish. That Gailltír are once again all that stand in their way or that Kenny is on the verge of joining elite company as a dual All-Ireland club winner, are just incidentals in her eyes.

There aren’t too many recriminations, in truth, about getting so close the last time. Just pragmatism and a determination not to repeat the same mistakes.

“It was nearly the fairytale end winning the double,” concedes Kenny. “But no, when you look back on the game, definitely we didn’t play well enough. It took us way too long to get into it. Looking back we didn’t really deserve it. We know that now and we have learnt a lot from it. Just looking forward to getting another crack at it. Hopefully we will finish it off this time.”

She thinks the occasion might have gotten to too many of them.

“I’d say that was the major factor, just nerves. We didn’t get enough possessions of the ball. I remember 20 minutes in I still don’t think I had felt weight of the ball at all. It just took us too long to fully implement what we went out to do. So that would obviously be the major focus. Just to really, from the start, to not let the nerves and the occasion get the better of us. Just get stuck in straight away.”

Geography makes Ferbane and Banagher neighbours and in GAA terms, that means fierce rivalry as well as friendship. With no camogie team, once she could progress no further with the boys’ hurling, Kenny had to row in with the Saints for what would become a mutually beneficial partnership.

“I always played hurling with the boys here (in Ferbane). Then Banagher would just kind of be the closest camogie club. So I got in touch with them and got involved with them.

“It was funny because growing up playing football with Ferbane and Naomh Ciarán, St Rynagh’s would always have been the one club that we would play in finals and stuff. You would be kind of rivals. To turn around and play with them was funny at the start but it’s good now, I really enjoy it.

“There’s always a joke and a mess about it. We don’t play Rynagh’s too often in the football but when we do, it’s funny.”

The footballers had a long reign as county champions ended in October by Tullamore but Kenny can still draw on the feelings of joy that winning the All-Ireland brought. She hopes they might be a motivation, that combination of knowing the difference between agony and ecstasy at first hand.

“That was unbelievable. Even now, any time we talk about it or just remind ourselves about it. It was such a mad time but so enjoyable. It brought really a lot of happiness to everyone around here and it was really good.

“A lot of the camogie girls were at the football and just saw the excitement that it brought and how much it means to so many people when you actually do go and win it.”

She followed her brother to the pitch as soon as soon as she was able. Colin was a prodigious underage football talent who was also capped at U18 level in rugby for Ireland before the discovery of an irregular heartbeat brought his playing days to a premature end. He was coach as Naomh Ciarán scaled the mountain top in 2019 however and his experiences have helped Kenny focus on getting the right balance between life, her studies in Biomedical Engineering at DCU and sport.

To that end, she has not even thought about what she will do in terms of Offaly as the year progresses. But the dual responsibilities are not a chore.

“Once the management communicate with each other. It’s actually really nice to go week-in, week-out. Focus on camogie then turn around, kind of get a break… I actually really like it, it really works for me, the balance between both.”

A niggly foot injury that she has only managed to shake off in the past few weeks is part of the reason for not looking too far ahead too. All Kenny’s focus and energy had to go into being in peak condition tomorrow.

“In the final you want to put out your best performance… To be honest, I don’t really look too much into the other team. But just from the last two times that we did play them, I remember how hard they worked in the forwards. Our backs, it was not anything they had experienced before trying to get the ball into the forwards. That’s something that opened our eyes, how hard their forward line worked. Obviously, it’s something that we want to implement in our game. Hopefully the backs can learn from that and help deliver the ball into the forwards quicker and we can get attacking and open up and actually play this time for long periods of the game.

“A real strength of ours, I think, is our balance. You have experience. Linda (Sullivan) has… I was just after looking back on her roll of honour, she is after winning so much. She has played in so many big games, same with Siobhán (Flannery), Mairead (Daly) even in football and camogie, same with (the Egan sisters) Róisín and Grainne. They have played in big games so they know what it takes to perform when it’s like important on a big day. Then you have young people like Sinéad, my little cousin. You have young people like that and subs to come in, that are really just full of energy.

“Hopefully that will be enough at the final whistle.”