CAMOGIE: “They gave us a diagnosis at the time that she wasn’t to live past seven. She’s turning 12 at the end of next month” – Westmeath Manager Johnny Greville 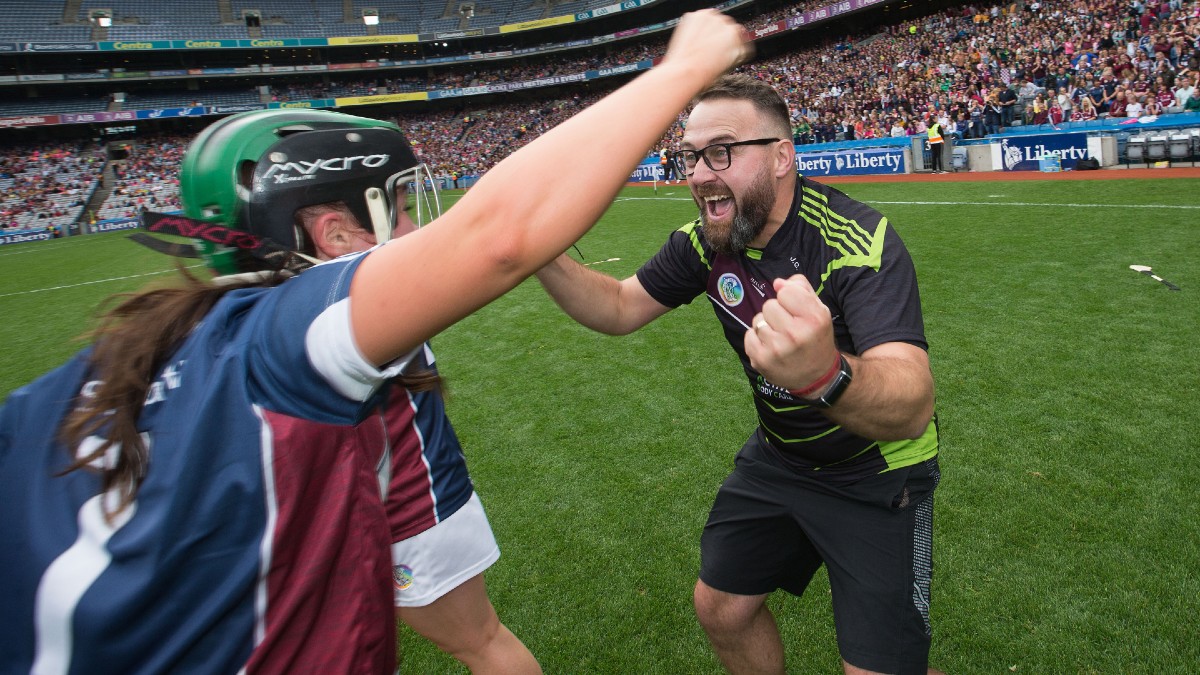 Logistics are part of the gig as a manager of a sports team but nowhere in the manual has it ever mentioned bubbles, pods and global pandemics.

The stress levels are high anyway in this line of work but when you don’t know a couple of days before throw-in who might be available due to the possibility of being a close contact of someone with COVID-19, the pressure must be unbearable at times.

Johnny Greville (40) is taking it all in his stride. A man who last year, combined management of Westmeath’s Intermediate Camogie and Under 20 hurling teams with a role as selector of the county’s Joe McDonagh Cup hurlers, he knows the value of the shared load.

None of that would have been possible without the backing of the support staff in all three camps.

Then there is home, and his wife Tracey.

“There’s some evenings we pass each other, I’d be going out the door and she’d be going in. I’d nearly be leaving a picture of myself on the table!” jokes Greville.

It is home that provides him with the sense of perspective about what constitutes a real challenge, and the imperative of having fun when indulging in a hobby and finding the joy where you can.

That is a key tenet of his coaching environment but there is no doubt that he gets as much as he gives.

Daughter Isabelle was born with a rare disorder and when she was two, the prognosis delivered was heartbreakingly finite. Johnny, a bricklayer by trade, closed his business 10 years ago to become her full-time carer.

Euphorically, it is his still his role.

“They gave us a diagnosis at the time that she wasn’t to live past seven. She’s turning 12 at the end of next month, which is great. That alone makes it all worthwhile.

“But the GAA and the Camogie has been a huge outlet for me in the evenings. I’ve really enjoyed all that and it has been a huge mental release, to tune out from the normal day-to-day. It’s helped me along the road.”

Thankfully, disability services and schools are remaining open during Lockdown 2. Further support, which has been integral to Isabelle flourishing.

“She’s great. She goes to a special needs school in Mullingar. They’re doing brilliant work there. They have them in their little bubbles and she loves it. There’s a great little group there and they’ve dealt with it really well.

“There was a big gap there when they shut down the last time. You can only do so much at home. It’s the interaction they have face-to-face that helps them and brings them along.”

Isabelle’s condition did make him think twice about maintaining his management roles.

“I was apprehensive enough about going back as Isabelle would be in the vulnerable category. I was taking on the Faughs’ senior hurlers as well, so it was a big decision.

“I was humming and hawing about it for a little while at the start whether I’d come back even with the Camogie.

“We don’t do anything inside. Any meetings are outside. The players have their phones in a huddle and it could be lashing rain, but I said at the start we wouldn’t put anybody at risk by going into an indoor setting and that helps the whole thing.”

A former county hurler, Greville made his initial foray into coaching with his own club Raharney’s Camogie team in 2005, while still a player. They won their first Championship in 25 years and completed a three-in-a-row.

They recently recorded a six-in-a-row.

Having captained Raharney to a County Championship, he retired 10 years ago and immediately took over the management reins. They won the Senior Championship that maiden season and garnered three in total by the time he threw his lot in with the Westmeath Camogie team in 2016.

He needed to be persuaded but sister Pamela does not take backward steps.

“It took her about three months to convince me. At the time I was minor hurling manager with Westmeath and still doing Raharney hurlers. I said no at first but she wore me down in the end and we went at it.”

It was very far removed from the current exalted levels of the Liberty Insurance Senior All-Ireland Championship.

“I’ll never forget, we played one of our first League games in Clonkil against Galway’s second team on a damp, wet morning in February. They gave us a bit of a beating and I was standing there afterwards scratching my head wondering, ‘What the hell am I after getting myself in for here?’”

He worked with county chairman John Weir to raise the bar in terms of facilitating player development and did the same in training. The Premier Junior title was annexed in 2017.

Last Sunday, they made their senior debuts and marked it by beating Limerick in Bruff.

Darren McCormack, Ciaran McKenna, Frank Mullen and John Gilligan are his lieutenants, Gilligan having attended to the S&C from the very first year.

Much has been made of Limerick’s unavailable players but they have a far greater pick than Westmeath and their second string were in the Premier Junior Final in 2019.

Aoife Doherty, Ava Balfe, Megan Dowdall and Sheila McGrath are examples of players in their late teens or early 20s who have emerged from an impressive production line.

Emily McCabe is in her first season on the panel and shone last Sunday.

McGrath was a goal scorer in the Premier Junior Final three years ago. Last year, she was player liaison officer, due to give birth any day as she paced up and down like a caged lion at Croke Park. Limerick was her first game back and she scored the goal that separated the sides at the final whistle.

McGrath, King and Greville’s younger sibling are survivors of the All-Ireland Junior B Championship triumph in 2006.

“People don’t realise. Westmeath won that Junior B against Monaghan on a one-day blitz in the dire straits of weather, conditions and fields and they’ve all come up the grades’ and are flying around the field like 19-year-olds now.”

It was significant that the players were not satisfied with the enormity of arriving at the gates of Camelot. They wanted to prove they were worthy of a spot at the Round Table.

“History is fantastic. You could have lost by 20 points and it would have still been a big moment for Westmeath Camogie but I don’t see that as success.

“We took something out of the game to carry forward and that’s what you want.”

Kilkenny are up next in the John Lockes grounds in Callan this afternoon (2pm). It will be tough but they but they wouldn’t be anywhere else.

Johnny Greville faces challenges head on. So does Isabelle.