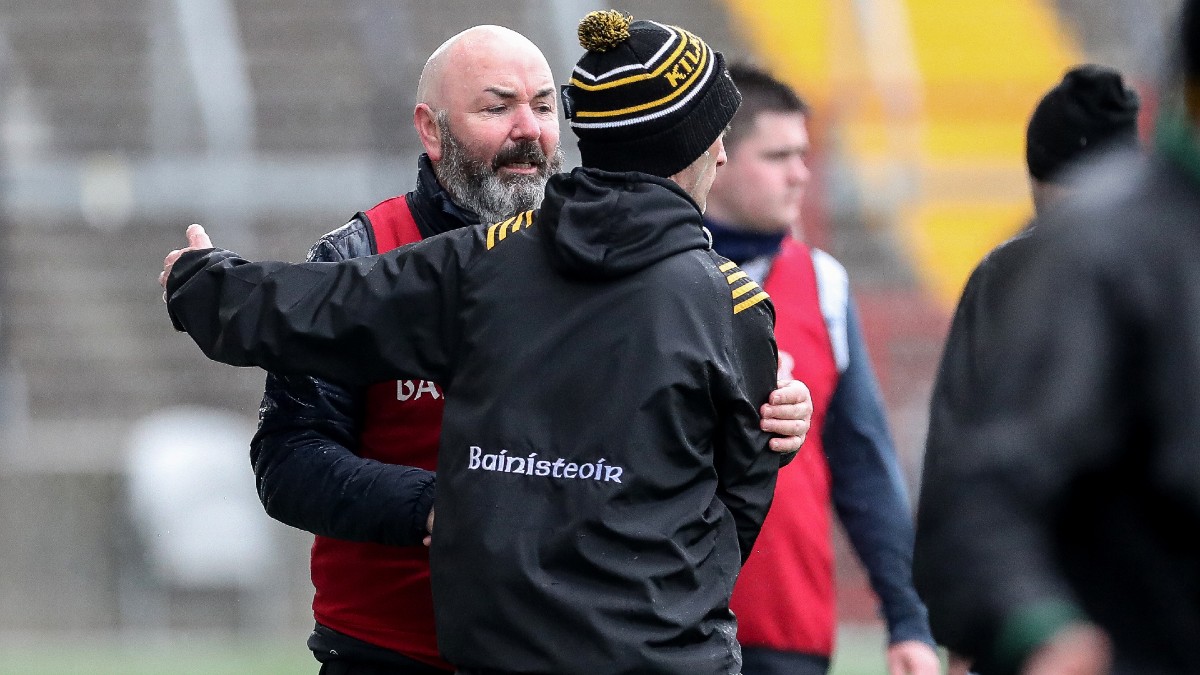 Cork boss Matthew Twomey was entitled to be pleased though he admitted there was plenty to work on as a pointed free by Chloe Sigerson from 55m in the fourth minute of injury time secured a 1-8 to 1-8 draw with Kilkenny at Páirc Uí Chaoimh and in the process, a place in the Littlewoods Ireland Camogie League Division 1 final on April 9 on score difference.

Securing silverware in his first competition as manager since succeeding the hugely successful Paudie Murray would be a tremendous start for Twomey but unsurprisingly, his focus is on the progression being made as he and coach Davy Fitzgerald introduce a number of new players to the squad.

“We had a certain game plan all week but with the water on the pitch, it just made it a dogfight between the two of us and a free fest,” Twomey told Red FM afterwards. “But even with the frees, you couldn’t strike it. So very pleased for Chloe’s last free, the composure for the girl was brilliant.

Surviving a stringent examination was vital as the hosts led by 0-5 to 0-4 at the interval and then moved five points clear after a Katrina Mackey goal and a quick point by the excellent Ashling Thompson. But Kilkenny moved up a gear to hit the front by the 52nd minute, when Denise Gaule drilled a penalty to the net beyond Cork skipper Amy Lee, who had made two fantastic first-half saves. And until Sigerson struck, it was Kilkenny who were moving to the final of a competition they won last year and have dominated over the past decade.

“They definitely put it up to us. We got a goal and a point and we thought we should have pushed on. We didn’t. Typical Kilkenny, they came back at us very hard and when they went ahead, I was wondering how we’d get a score and we were lucky to scrape the draw. But we probably learned a lot more from the game in the second half when our backs were to the wall. There was a couple of things we were happy with and a lot of things we were not happy with. It’s fuel for thought.

“There’s some young girls have done well. Méabh Murphy was on Denise Gaule for most of the match and I thought she did remarkable on her. A few players are after putting other players under pressure so we’re happy with the League campaign so far. The whole thing has been a success but we still have a lot of work to do, we know that.”

Twomey’s counterpart, Brian Dowling not too downbeat, taking positives from the fortitude displayed into the teeth of the elements when falling behind.

“We’re disappointed we’re not in a League final but delighted with the performance,” Dowling remarked. “Coming down we weren’t sure where we were at. We were poor against Clare the last day and Cork had a massive win against Limerick so we knew we had to be on top of our game as usual when we play Cork, there’s never much between the teams. In fairness to the girls from Cork and Kilkenny, the effort and attitude they put out there in those conditions was unbelievable.

“After half-time, when Cork got the goal and Ashling Thompson tapped over a point straight after, it went to five up. It wasn’t looking too good then, I thought the floodgates might open. I said to Tommy (Shefflin) on the sideline, ’This is the time now, we’ll see what character we have,’ and in fairness to our girls, they stood up. To turn a good Cork team over like that and to push ahead and be winning going into the home straight was brilliant.

“Obviously we’re disappointed Cork got the equaliser but when Chloe Sigerson is standing over a free from 50 yards, there’s only one answer. It’s going to be a score. She’s a brilliant striker of the ball. But we’ve a lot of positives to take forward into the championship.”

Tipperary maintained their bid to emerge from their group but were pushed all the way by Dublin before recording a 1-12 to 1-8 triumph at The Ragg and maintain their unbeaten record.

Mary Ryan, Aoife McGrath and Cáit Devane made their first starts of the competition and Devane’s six points, allied to an early Casey Hennessy goal were the key scoring contributions. When Kerrie Finnegan goaled for Dublin however, the visitors were buoyed and it was nip and tuck all the way from there to the final whistle.

“We got the result we wanted but I thought we made very hard work of it,” was the assessment of Tipp boss, Bill Mullaney on SportsDaz afterwards. “The conditions were atrocious but they were atrocious for both teams. We worked very hard to get the result but we knew it was gonna be a tough task with Dublin. They weren’t far off Galway and we probably hadn’t been tested up to this point.”

A four-point lead having played into the wind suggested that the Premier’s finest would pull away after the resumption, but the Metropolitans confirmed the impression they have given throughout the campaign that they are an improving outfit with a strong spirit.

“Dublin were honest, committed, made it very hard for us. They stacked the backs, we couldn’t break through. We had a couple of scoring chances we didn’t tap over the bar when it was on either to put that gap between us. Fair play to Dublin, they made us work hard for everything but I was delighted with our work rate too. But there’s more in us.”

And Mullaney conceded that they would need to produce it if they were to overcome Galway and set-up a first national final appearance in 13 years.

“I’ve a bit more to think about after today. Galway are going to be a serious test. We’ll have to step up but I think we’re going okay, we’re going in the right direction.”

Dublin manager, Adrian O’Sullivan was slightly frustrated that his team had missed an opportunity to record a statement win but admitted that there was so much to take from the performance, particularly in response to falling six points down after Hennessy’s goal.

“It’s a tricky one,” explained O’Sullivan. “The conditions were so poor in the second half it just came down to a battle. From a performance point of view it’s hard to get anything out of it. What we spoke about there in the dressing room is that there was probably an opportunity there to take a scalp. We didn’t take our goal chances – we had two clearcut goal chances in the second half that we missed. Against a team like Tipperary, they’re not going to give you loads of chances.

“While we’re disappointed that we missed an opportunity to take a scalp given we worked so hard, we’re also happy we couldn’t fault anyone on the pitch. They worked so hard, especially in the second half playing into that breeze. We held Tipp scoreless for 20 minutes. So you’d be proud of them while a bit disappointed at the same time.”

Training is sure to be upbeat this week, with next weekend’s encounter with Down to take place in Croke Park.

“We’re delighted to be getting into Croke Park. Dublin GAA have really looked after us. They always look after us. They’ve made it happen, along with Karl (O’Brien), the chairman of the county board. So it’s great to be able to turn around and have something to look forward to for the week, that we can give our young team a runout at Croke Park and hopefully it’ll be a taste of things to come over the years.”

Elsewhere, Down and Clare recorded their first triumphs of the campaign to ease relegation worries, while increasing those of Offaly and Limerick respectively. Down could call on their Portaferry contingent and it was significant, as Niamh Mallon scored 2-4 in the 2-11 to 3-6 victory over Offaly at Liatroim Fontenoys.

Despite Áine O’Loughlin’s first-half goal, Clare looked like losing the Shannonside derby with Limerick when trailing by 0-11 to 1-5 at the three-quarter mark thanks to the shooting of Caoimhe Costelloe at TUS Gaelic Grounds but they hit the last five scores from Zi Yan Spillane, Claire Grogan, Eimear Kelly and Chloe Morey (two) to snatch a vital win.