CAMOGIE: “We can all focus on the past too much and on the future as well. If we remain present, it is the most important thing” – Wexford’s Chloe Foxe 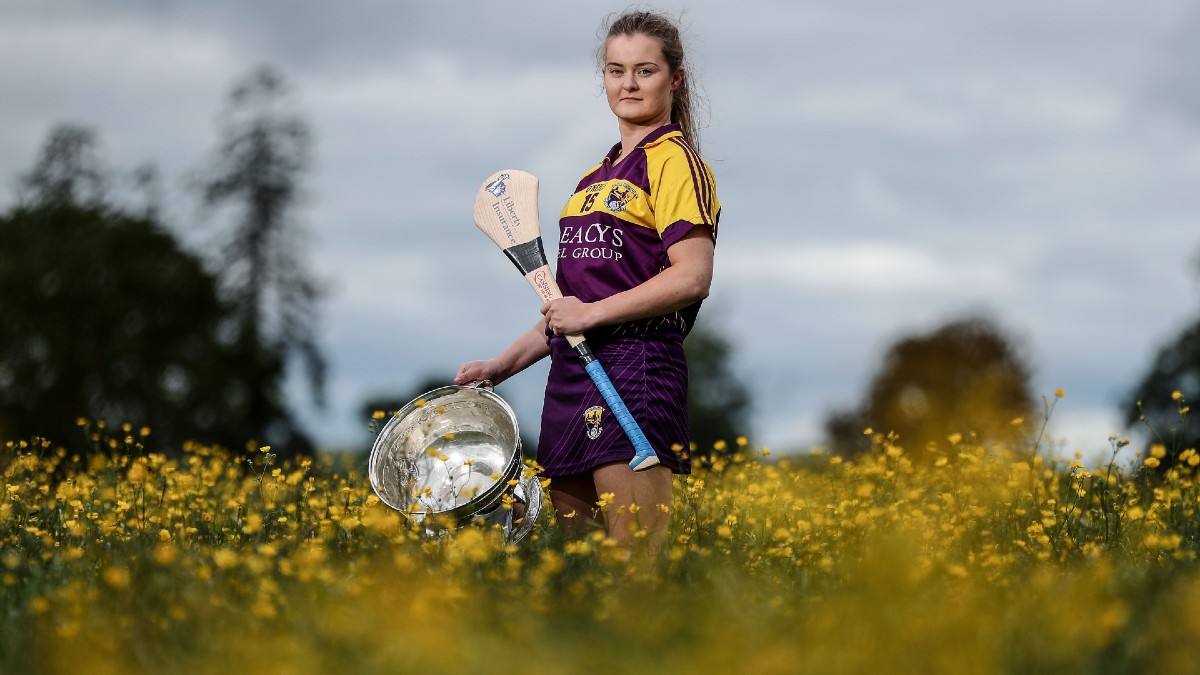 The clock ticked into the seventh minute of injury time as Chloe Foxe addressed the penalty, with Wexford trailing by a point to Limerick in their first-round All-Ireland Senior Camogie Championship tie in Newcastle West.

The hosts had been hot favourites, so it seemed obvious to most that Foxe would tap over an equalising point and give her side, gradually making the return to competitiveness at the elite level after a startlingly rapid descent, a tangible reward for outstanding effort.

Well they left the south west with tangible reward alright, only it was the entire duck, the sliotar propelled to the net to provide a two-point victory that set Wexford on their way to a return to the knockout stages of the championship, two years after scraping over Meath by four points in a relegation play-off.

Foxe scored 2-6 from placed balls against the Royals, including shaking the rigging from another penalty, to lift the Yellowbellies over the line.

Her teammates slag her about her tendency towards positivity but drilling that goal illustrates a ruthless, clinical side. A winning mentality. Popping it over never even entered her head.

“My dad said this after the match. ‘Did you think about putting it over the bar, or were you going always going to go for the goal?’” Foxe details of the conversation with her father Ger, a selector when Wexford reached the All-Ireland football semi-final in 2008.

“It actually never crossed my mind until he said to me a few minutes after the game. If you would have said it to me (at the time), I would have said, ‘Why would I do that?’ I didn’t think about it.

“As players, I don’t think we go out and think about drawing anyway. We think about winning in every scenario. I remember playing a draughts county final, or checkers as you might call it. I was only ten or 11. But we had got to the end and it was basically stalemate as it would be in chess, and it was just my piece and my opponent’s piece waltzing around the board.

“And the referee said, ‘Are we going to stop it here lads or will we continue?’ My opponent I think he just nodded, but I said, ‘Give it another few minutes.’ I was content by the possibility of him making a mistake or something like that. Winning should be always at the forefront.”

We are left to guess at what manager Kevin Tattan might have advised, had he been in a position to relay a missive in opportune time. Would there have been shades of Johnny Dooley and Eamonn Cregan in the 1994 All-Ireland hurling final, when the former blanked the managerial instruction to point a 21-yard free, instead goaling and sparking a remarkable Offaly comeback?

“Kevin actually had Covid that day. He didn’t feature at all. Even though the message probably was coming…. it got lost in the post I’d say.”

It is customary to look to the next target after a first-round win but Foxe felt that it was important to embrace the magnitude of the success.

“It has been a long time since we went out in the first round of the championship and won a game like that. I don’t speak a lot in group settings but I said to the girls, ‘Don’t focus on next week.’ People were talking about preparing (for the next one). I said, ‘Let’s just absolutely enjoy this moment right now.’ We had some cruel defeats over the last three or four years. We got beat by I don’t know how many points in Bellefield against Galway one afternoon. And to go out and win was great now.”

Foxe likes to keep an eye on the here and now. Take when she graduated from UCD in June with her computer science degree. You venture that it must have been disheartening to miss out on the celebrations with her peers due to the Covid-19 restrictions. She has another take.

“I suppose it made the whole situation a little bit simpler… Just to even spend the evening with family, visit my granddad and things like that, during my graduation day. That was nice as well just to bring it back to what is important.”

There is the fabled filling up of the half-empty glass as espoused by former Ireland and Munster rugby legend and current La Rochelle director of rugby, Ronan O’Gara.

“Yeah, I embrace the good vibes only most of the time. People would be on to me. I am always spouting around about it. I like to focus on the positives and remain present as well. We can all focus on the past too much and on the future as well, what potentially could be. But if we remain present, it is the most important thing.”

Which doesn’t bode well for a discussion on Wexford’s recent travails and the fact that they were on the brink of becoming an intermediate county, seven years after completing the senior championship three-in-a-row.

Fortunately, politeness features prominently among Foxe’s laudable characteristics and she humours her interrogator by addressing Wexford’s plummet from domination. While she maintains that part of it was the end of one cycle and the start of another, it is interesting that she considers an over-emphasis on past glories to have inhibited the path towards creating new ones.

“In the last three or four years I found myself sitting in team meetings where we would be staring at a PowerPoint and the deck would be scattered with photos of teams gone by. I would be sitting there. I couldn’t actually concentrate on the content of the discussion because I was thinking about it so much.

“You have to find your own standards, your own expectations and create a culture where it is about this team. That Wexford team, they are the pinnacle of where we want to get. But if you look at it in a different context, I don’t think Ole Gunnar Solskjaer is in addressing Paul Pogba with pictures of the (Manchester) United team from the ‘90s.

“We set our own goals from the potential that we have in our team. That cycle is coming again, there is great young players coming through. The likes of Aoife O’Connor, Emma Dempsey, we have seen a few performances from Orla Sinnott and Sarah Harding-Kenny, who has been absolutely outstanding coming in as a dual player and really dominating for two days over a weekend for two weekends in a row. It’s really inspiring really.”

The reboot began with Tattan’s appointment. Being assured of a place in the last six after following up the Limerick triumph by overcoming the Offaly challenge is clear evidence of the continuing advances.

“It always manifests from Kevin in terms of his philosophies as a coach. You know what he brought to this team, even though we have had great managers in years gone by. He has brought a different outlook and a different perspective as well. Even though he probably did his research on times before, he never focused on the three-in-a-row, or what happened before in those types of games. He just set out from the start and got really good people behind him.

“When he first started, back November two years ago, as a team we always had a feeling that the people that were there really wanted to be there for us and not because it was a Wexford senior camogie team. It was that we really wanted to go somewhere in terms of starting out on a journey. It is hugely down to his take as a manager and his style.”

The St Martin’s sharpshooter is on a two-year grad programme with AIG, working on a variety of IT projects but they key assignment is one that feels familiar.

Tomorrow’s visit to Semple Stadium to take on a thriving Tipperary feels like a free shot, with qualification assured and a potential place in the semi-finals up for grabs. Foxe doesn’t demur, maintaining that the pressure is on the Bill Mullaney’s charges.

But when the ball is thrown in, the objective will be as it has always been.