CAMOGIE:  “We just bounced off each other and whatever way, my knee didn’t fancy it” – Galway’s Tara Kenny 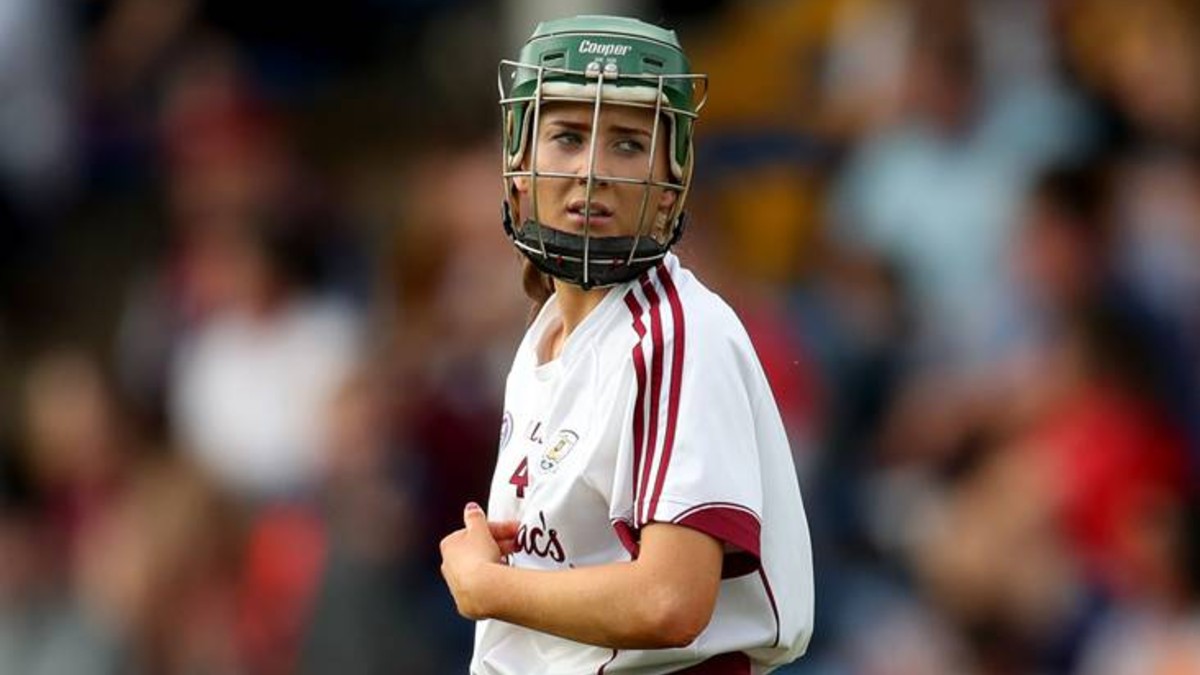 When Tara Kenny walks out of the dressing room, jogs from the tunnel and sprints out onto the grass of Croke Park tonight, there may just be a temptation to smile and exhale a little sigh of relief, before resuming focus on what unfolds within the white lines and her job in nullifying the threat of the Kilkenny attack.

This time, she will have made it.

Having progressed along with Aoife Donohue, Shauna Healy, Caitriona Cormican, Orlaith McGrath and Rebecca Hennelly to the Senior squad after the Intermediate triumph of 2013 – the O’Duffy Cup was also bedecked in maroon and white ribbons that day – Kenny had endured a number of near misses but excelled as Galway got the upper hand on the Noresiders in the League Final six months earlier at HQ.

Cruelly, on the biggest day, she was forced to watch, helpless on the sideline, as Cathal Murray’s crew hit the Cats for three first-half goals to claim the ultimate Championship victory after a seven-year hiatus.

Then last March, just before Lockdown, she returned to Croke Park and watched from the stands as her club Sarsfields put two previous Final defeats behind them to claim overall honours.

“I can picture it, just like it was yesterday”, says Kenny of the incident that robbed her of career zeniths.

“It was something simple, five minutes into the game. Nothing unusual. We did the same warm-up and everything. I was just running in a straight line to the ball with Ailish O’Reilly and the two of us – I wouldn’t even call it a tackle – we just bounced off each other and whatever way, my knee didn’t fancy it and just jerked.

“I didn’t know. I got up and walked off and iced it. Then it started getting stiff. I didn’t hear any pop and that’s usually what people say you’d hear. It was the first thing I asked Becky (Hennelly), who has done the cruciate twice. ‘How would you know if you did it?’ She was like, ‘You’d know.’ I think I was just oblivious.

“I went for the scan the next morning. A kick in the teeth. I wasn’t thinking about the nine months out. I was like, ‘Oh my God, I’m missing the match.’

“The club All-Ireland was just as sickening. We had been trying to get there so long. But everything happens for a reason, hopefully.”

While hurting internally, Kenny quickly recognised her responsibility to her colleagues.

“That happened on a Thursday. Then I had the weekend to feel sorry for myself. Then it was the week of the Final. So I was still going to training, still putting on the face to the women. Then all I wanted was for the girls to win.”

She allowed herself a fortnight of partying – maybe there was a bit of mourning in that too – but then it was head down, months of prehab as prescribed by surgeon Ray Moran.

“I could run and sprint in a straight line before my operation; I had it that built up. It kind of made the road the other side shorter.”

The operation took place on October 29th and then it was five times a week with S&C coach Robbie Lane, and a weekly visit to Cliodhna Costello to work on balance and landing stability.

“I was very lucky that Robbie had experience with ACLs before. It seems to be a real problem for women though. At the time I was with him, I think he had four other ACLs with him, club girls. I had full faith in him. Never questioned him. I had Becky there too, bouncing questions off her.

“I was very lucky that it was a clean snap. I had no other damage. My meniscus and all that was fine. So I just did everything I was told and had no setbacks at all during my rehab.

“I was on night shift (at Boston Scientific) at the time of my operation so I used to finish at seven in the morning, and then go straight to Robbie and he’d take me for the hour. I like my sleep so if I went to bed, there was no getting me up.”

Lane “changed the game for us” since being appointed by the county board as head of S&C for all county teams. He is still seeing the players individually twice weekly, although given the rat-tat-tat nature of the current programme; the work has been more injury prevention than strength work.

Their robustness in the tackle was particularly evident in last year’s titanic Semi-Final clash with Cork, and Kenny herself points to Carrie Dolan’s ability to ride a strong tackle on the way to scoring her goal in this year’s Semi-Final against Tipperary.

“We were always missing something, which I thought Robbie and Murray (Cathal) brought in. Physically and probably a bit mentally as well. Robbie puts a lot of hours into us, any time of day.”

One of the most diminutive players in the game, Kenny threw her light 5’3’’ frame in front of oncoming traffic with abandon, regardless of heft and velocity, as Galway withstood Tipp’s stern examination. It was obvious that there were no lingering physical or mental issues.

She had been supposed to return to contact training on St. Patrick’s weekend. When Lockdown was announced, she was understandably disappointed, having been looking forward to that singular feeling she had missed so much. There hadn’t been an ounce of anxiety then not to mind now.

“I don’t think about my knee at all. It doesn’t bother me at all. When you do the work, you’re not wary”, is the logical explanation.

That said, the extended time could only help. And with club fare returning first, she had a valuable bank of five games in the locker as Sarsfields retained county honours.

“It worked out in my favour completely. It gave me a few months more of strength work. I had a few weights at home so I was probably one of the few that wasn’t giving out about Lockdown. Club being first worked for me then. That gave me a lot of game time and momentum.

“My goal at the start of the year, when the Championship was in June, I wanted to give Murray an option to play me, to compete at that level. But thankfully I made the team.”

The 27-year-old has sympathy for Katie Power, whose broken kneecap robs Kilkenny of a supreme talent.

“Another freak injury. I know how she’s feeling this week. She’s there watching training. It’s not a nice feeling.”

Kenny insists that retaining their title will be no easy task, with an opposition buoyed by their Semi-Final defeat of Cork and a cause in the form of Power’s injury-enforced absence.

By lining out this evening, she is a winner already.