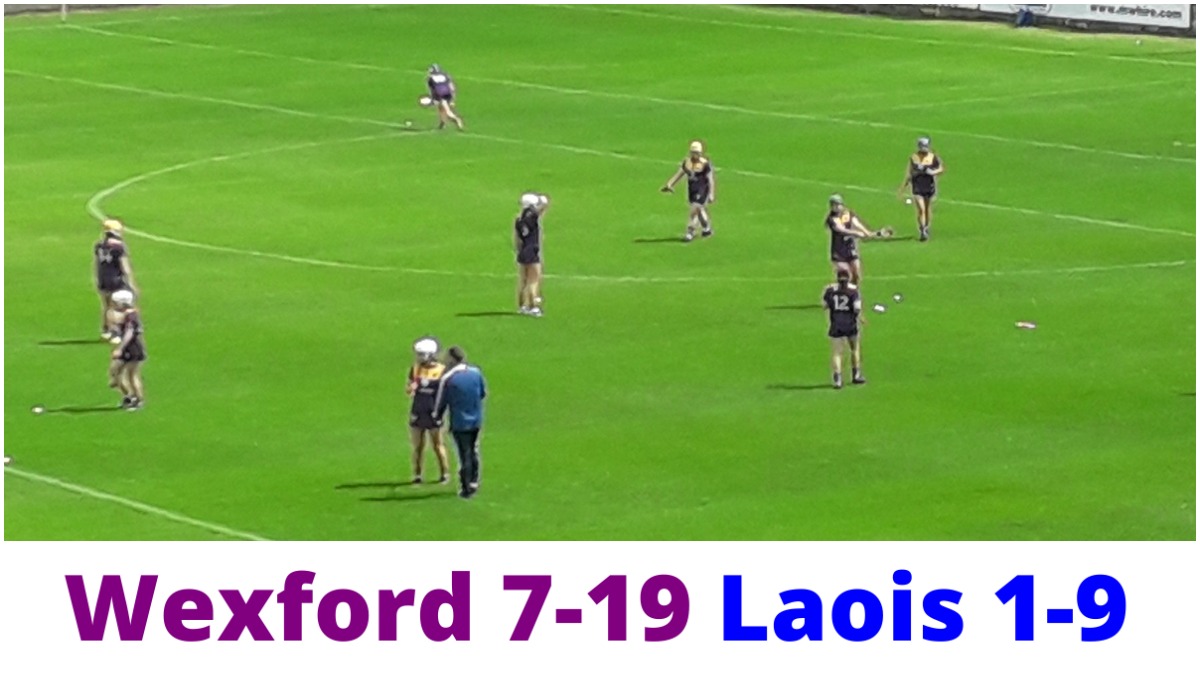 Katrina Parrock’s return to inter county camogie may have stolen the headlines pre match but the post game analysis was all about the Wexford team’s intentions for 2021.

After relegation two years ago, COVID-19 stopped the Slaneysiders gaining immediate retribution but their positive championship showing in the winter suggested their struggles are nearing an end.

After beating Kilkenny two weeks ago, Kevin Tattan’s charges secured their quarter-final position early before producing an exhibition in stages to dismiss the challenge of last year’s All-Ireland semi-finalists.

It wasn’t without fault!  They struggled defensively in the early stages even if they weren’t punished.  And there were regular occasions in the second half where their manager, watching from the O’Moore Park stand, reminded his troops that a slip in standards wouldn’t be tolerated.

To give Laois their due, this result didn’t reflect their overall contribution.  A young side boasting All-Ireland winning minors from two years previously did showcase an ability to challenge their opponents after a shaky start.  And five of the goals conceded came in the final 18 minutes.

After sitting out the Kilkenny tie, Parrock’s return caught the eye as one of three late changes and it took the Ballyboden star just 30 seconds to open her account.

The three-time All-Ireland winner was heavily involved in the opening purple patch but her role was part of an ensemble cast.  She provided the assist before two minutes for Aoife Guiney to get Wexford’s opening goal giving them a 1-1 to 0-0 advantage.

A Laois free 60 seconds later was converted by Aimee Collier but the visitors looked in the mood to keep the umpires busy.  Ellen Roche (2), Kate Kirwan and a Guiney brace made it 1-6 to 0-1 on seven minutes.

The O’Moore side started to get a handle on matters reducing arrears as Collier added two placed balls – the first won by Jessie Quinlan’s industry.  Wexford replied through Anais Curran and Leah Walsh but a goal on 16 minutes throw the game wide open.

Clodagh Tynan pushed forward from centre back sending a dangerous ball towards the square.  Laois prioritised this tactic but struggled to find blue jerseys beforehand.  However, Gráinne Hyland had different ideas this time.

The St. Brigid’s full forward threw herself into the battle and the ball broke for her to find the net.  Laois’ deficit was now just 1-8 to 1-3 but they could have done with another five minutes before the water break that sucked their momentum dry.

It allowed Wexford regroup, a reminder the job wasn’t done.  After Walsh was denied by a superb Aedin Lowry stop on 20 minutes, referee Mike Ryan spotted a foul from the ensuing play and a penalty gave Wexford their chance to seize the initiative again.

Tynan responded for Laois before the break but a key moment on 28 minutes may have provided a glimmer of hope.  Collier, Cathy Galbraith, Sarah Cuddy and Amy Byrne combined to unlock the opposing defence but captain Amy Cardiff provided the saving touch for the Slaneysiders.

At 2-11 to 1-4, Wexford were never going to suffer the nine-point loss that would eliminate them from the National League; and it was increasingly unlikely that Laois were going to deliver the six-point victory to take Kilkenny’s slot.

And Wexford’s squad sensed the opportunity to audition for quarter-final slots leaving Tattan and his management with plenty to ponder for next week.

O’Connor launched the first attack but it was Anais Curran who opened the second half scoring on 32 minutes.  Guiney, Cardiff and Parrock created a goal chance only for full back Roisin Kilmartin to block.  Sinnott made it 2-13 to 1-4 on 35 minutes.

Collier hit back with a free before Cathy Galbraith added Laois’ second and final score from play.  This was the difference in the attacking threats of both teams as nine Wexford players shared 6-16 from play.

And after Curran left it 2-14 to 1-6 on 41 minutes, one of the game’s golden moments opened the floodgates.  Kirwan and Joanne Dillon made inroads down the right flank and the latter supplied Parrock who hit a bullet to the net.

Lowry was superb in goal for Laois and can’t be blamed for Wexford’s total tally.  But that third goal finally broke the hosts’ resolve who now must refocus for the relegation series battle with Derry, Tipperary and Dublin.

Curran converted a free before Kirwan joined the goal spree on 47 minutes.  After the water break, Collier reduced arrears to 4-15 to 1-7 but Wexford’s next three scores involved green flags.

Guiney’s run resulted in her second goal and substitute Emma Dempsey got the maximum dividend from two attacks before a Collier ’45 on 55 minutes stopped the rot but Laois trailed 7-15 to 1-8.

There could have been more goals but Laois will learn from this providing the experience doesn’t unsettle them.  They won’t face opposition like this when the championship arrives in July.

Wexford finished with points from Dempsey (2), Sinnott and Linda Bolger.  They can have a good summer even if challenging for the O’Duffy Cup might be a stretch just yet.  But they’ll aim to keep their foot on the pedal during the league knockout phase as promotion must be a priority.