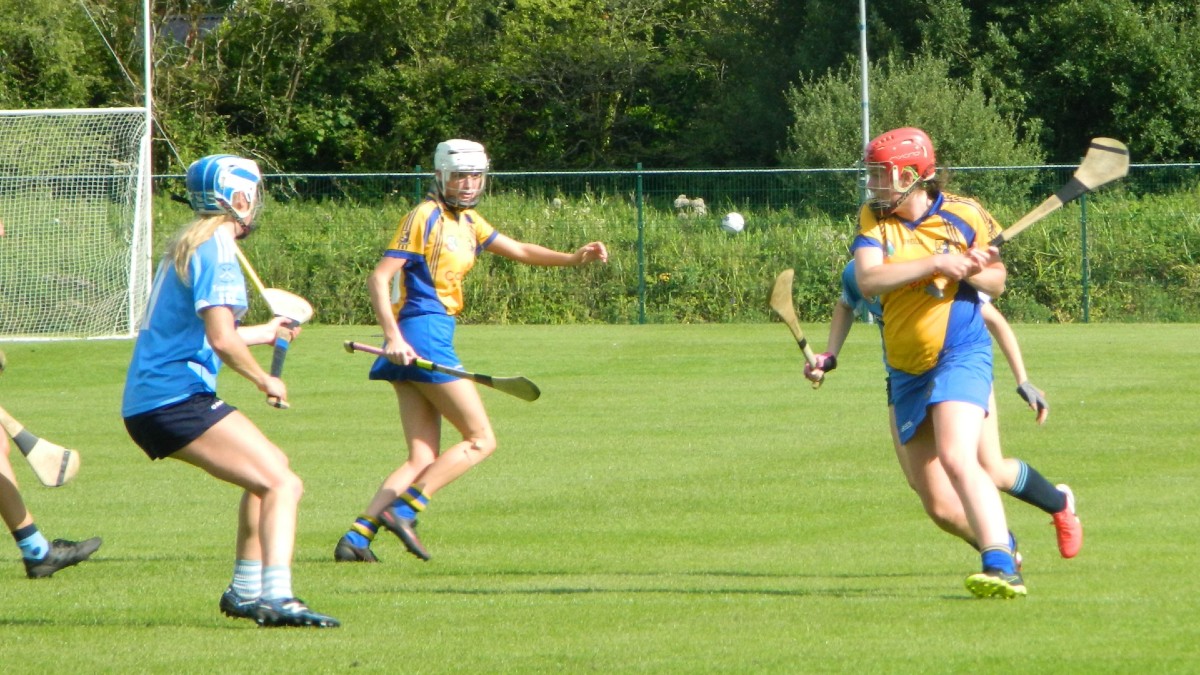 After both teams lost in Round 1, today’s Truagh v Sixmilebridge was technically knockout championship with both teams needing a win to stay in contention for the McMahon Cup.

Truagh started the quickest with the first score going to Ellen Horgan after a previous attempt had hit the upright and gone wide.

Sixmilebridge weathered a couple of early attacks and before the fourth minute had created their first score when Chloe Morey pointed a free from 70 metres and within two minutes added a second free from 50 metres, early warning signs to Truagh’s indiscipline would be punished.

Truagh levelled the game for the second time with a point from play from hockey star Roisin Begley. Morey’s radar faulted briefly when a 60-metre free hit the post with Truagh’s Laura Foley quickest to react winning a relieving free for her team.

Minor player Joanne Egan put Truagh ahead and she followed that up by winning a free for her team which Eimear Kelly duly pointed. Another missed free from Morey kept the score at 4 points to 2 at the first water break.

Into the second quarter Sarah Loughnane in goals for Sixmilebridge was tasked with frees inside her own half and her long-range effort was rewarded when Morey gathered and pointed from play to narrow the gap.

Shortly after Maire McGrath hit a wonderful cross field ball to Sixmilebridge’s Susan Fahy who took on the Truagh defence finding the net for the game’s opening goal and Sixmilebridge went back into the lead.

The young Joanne Egan steadied the Truagh ship somewhat when she added her second point of the day after a pass from Clare Senior player Eimear Kelly.

Egan’s sister Louise was unlucky when a mishit sideline from Sixmilebridge came to her within 10 metres resulting in a free on the sideline at halfway. Morey took on the challenge, but the ball dropped short to Aideen Hogg in the Truagh goal.

The resulting clearance found Fahy however who pointed to restore Sixmilebridge’s two-point lead.

With the clock running down on the first half Truagh found their purple patch and against the run of play Rebecca Foley rattled the back of the Sixmilebridge net and inside a minute Truagh had added their second goal when Horgan’s speculative shot found the net after an unfortunately error from Loughnane.

An early attack at the start of the second half by Sixmilebridge was cleared and Truagh’s Begley added her second after gathering the cleared ball.

Muireann Scanlon opened the scoring for Sixmilebridge in this half with a point from play within a minute.

What followed was a period of missed chanced by both teams – Truagh’s indiscipline gave away possession on a number of occasions but in tactically astute parts of the pitch making it hard for Sixmilebridge to convert possession to scores apart from another huge free from 70 metres by Morey to bring her personal tally to five.

Horgan & Foley combined well in Truagh’s attack but failed to convert and it took a point from play by Kelly to settle the third quarter nerves for Truagh. O’Loughlin added a long-range effort from play to put Truagh firmly in control mid-way though the half.

An indirect free from their own half saw Sixmilebridge win a scorable free which went wide. O’Loughlin added another before the second water break to extend their lead to 1-5 with Kelly added another free when play resumed.

Sixmilebridge, perhaps a little early in the half, chose to drop a free short to get that much needed goal but Michelle Powell at full back for Truagh cleared. Kelly added a 45′ free after a superb block from Loughnane in the Sixmilebridge goals.

Loughnane denied Kelly minutes later within another good save and Kelly put the resulting rebound wide which would have put Truagh out of sight with less than 10 minutes to play.

However, on 55 minutes Kelly looked to be tapping over a 20-metre free & caught the Sixmilebridge defence out by going for goal and scoring. With the game out of sight Kelly finished her day’s scoring with a point from play after a pass from substitute Sinead Hogg.

The final score of the game came on the stroke of 60 minutes, and it mirrored the start as Truagh’s Horgan added her third point from play. Three minutes injury time were played but no scores ensued. A comprehensive win in the end for Truagh on a score line of 3-16 to 1-7.