FOOTBALL: 12 games on the weekend agenda as 2021 TG4 All-Ireland Championships get underway 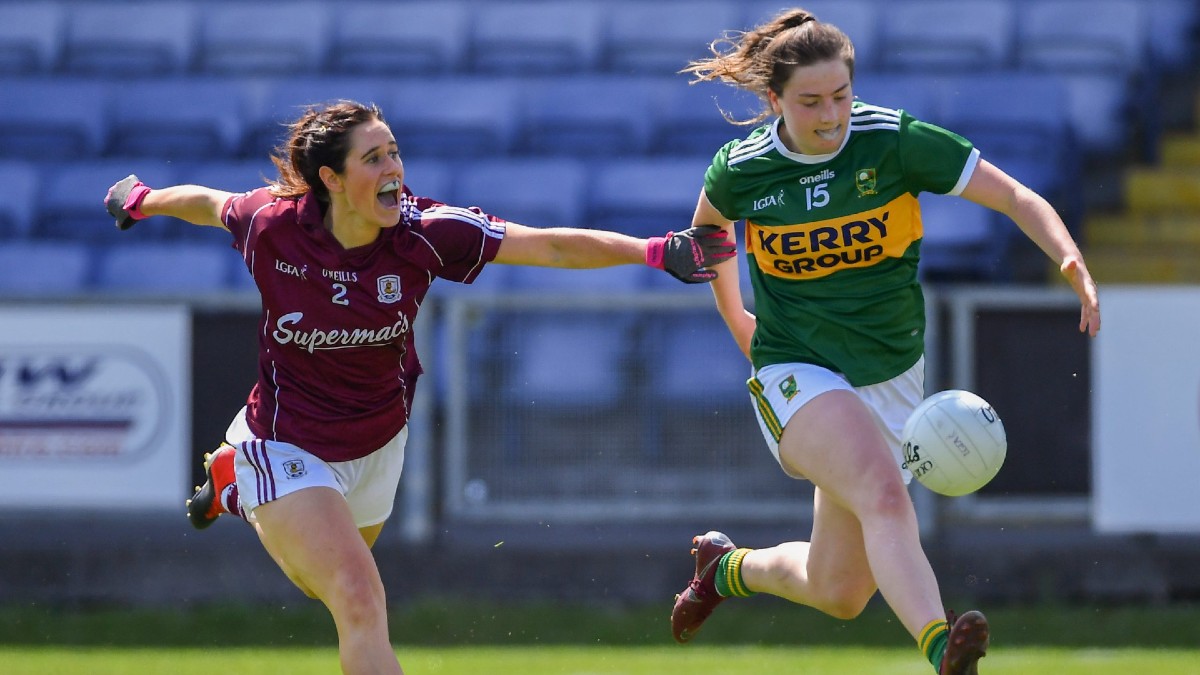 LESS than a fortnight after the completion of the 2021 Lidl National Leagues, the TG4 All-Ireland Ladies Senior Football Championships get underway this evening.

Over the course of the weekend, there are 12 games down for decision – five in the senior grade, five at intermediate level, and two junior championship fixtures.

The action starts with the live TV meeting between Galway and Kerry at Cusack Park, Ennis, this evening at 7.30pm (TG4).

The weekend’s other eleven games will all be available to view on the LGFA and TG4’s dedicated viewing portal: https://page.inplayer.com/peilnamban/

Holders Dublin begin their five-in-a-row quest in the Senior Championship on Saturday with a clash against Tyrone (Kingspan Breffni, 2pm).

Tickets are on sale for weekend fixtures at the following link: https://www.universe.com/users/lgfa-euro-FBRMKH

Two teams with question marks hanging over them get the 2021 TG4 All-Ireland Championships underway this evening – in what should be an intriguing clash.

Cusack Park, Ennis, is the venue for the live TG4 offering, as Galway and Kerry meet in a ‘Gaeltacht derby.’

Donegal are the other team in what promises to be a keenly-contested pool – and a victory for either side this evening would have them in a good place.

Galway lost out heavily to Donegal in their Final League outing – and missed out on the semi-finals – while Kerry suffered defeat to Meath in the Lidl NFL Division 2 Final.

This is the ideal match for both sides to shake off those recent cobwebs and get Championship 2021 off to a positive start.

Armagh crushed Monaghan in the recent Ulster semi-final but it was Monaghan who had the upper hand when the sides clashed in Division 2 of the Lidl NFL.

Armagh, however, appear to have rediscovered some of the form that took them all the way to an All-Ireland semi-final appearance against Dublin in 2020.

They were too good for Tyrone in the provincial semi-final last weekend and will be looking to repeat that recent victory against Monaghan.

Aimee Mackin was the 2020 Senior Players’ Player of the Year and sister Blaithín has been in sensational recent form, too.

But Monaghan are a very capable outfit in their own right and they were unlucky not to reach the knockout phase of the 2020 Championship.

The Farney girls beat Tipperary at Parnell Park before losing out narrowly to Galway by just a point in a winner-takes-all clash.

But they lost out to Meath in the Division 2 semi-final, and then to Donegal at the semi-final stage of the Ulster Championship.

Cavan remain a very capable outfit on their day but they came up short in a 2020 Championship group alongside Cork and Kerry.

Mayo, for their part, were showing decent form throughout the League but they were well beaten by Dublin in the Division 1 semi-final.

The Westerners are still capable of having a big say in Championship 2020 and manager Michael Moyles will be looking to find the right mix in a deep squad as the campaign progresses.

This one promises to be an extremely interesting game in Birr. Cork, smarting from a Division 1 Lidl NFL Final loss to Dublin, come up against a Meath side high on confidence.

The Royals collected the Division 2 title recently and with it, promotion to the top flight.

And this fixture is their first back in the Senior Championship ranks, after emerging from the Intermediate grade with an All-Ireland Final victory over Westmeath last December.

Cork will start as favourites but any they’ll need to be on it right from the start against a Meath side that will show absolutely no fear.

Meath have a forward line capable of wreaking havoc but Cork are similar, with the likes of Orla Finn and emerging talent Sadhbh O’Leary marked out as genuine scoring threats.

It’ll be hard for Dublin to avoid the talk of five-in-a-row as they go deeper into the competition but that’s the job for manager Mick Bohan and his players as the quest for Brendan Martin begins again.

Dublin have been excellent in recent seasons, landing four successive All-Ireland titles while also adding League crowns in 2018 and 2021 for good measure.

The Sky Blues have become the game’s dominant force and they have a squad laced now with talent and depth.

Dublin’s bench for this game contains players of the calibre of captain Sinead Aherne, Lyndsey Davey, Nicole Owens, Siobhan McGrath and Sinead Goldrick, who’s working her way back from injury.

They’re the team to catch and Tyrone will need to bounce back quickly from last weekend’s Ulster semi-final loss to Armagh, to be in a position to compete.

This is the first Senior Championship clash between the counties since Dublin’s breakthrough All-Ireland Senior Final win in 2010.

Leitrim were disappointed to lose out to Louth in the recent Lidl NFL Division 4 decider but it was an encouraging campaign from the Connacht outfit, nonetheless.

In contrast, Fermanagh are smarting after suffering relegation back to the bottom tier, having lost out in a relegation play-off against Wicklow.

But Fermanagh, who were crowned Junior Champions in 2020, will relish the step up to the Intermediate ranks.

They lost out by just three points against Down in the recent Ulster Final.

TG4 All Ireland Junior Championship – Round 1

Antrim and Derry meet again in the Championship, just a couple of weeks after contesting an Ulster Final.

The omens aren’t great for Derry if that previous fixture is anything to go by, as Antrim ran out comprehensive 4-17 to 0-8 winners.

Derry also struggled in the League – finishing bottom of a four-team Division 4A, and losing out to Antrim along the way.

Westmeath are favourites to go one step further and land the TG4 All-Ireland Intermediate title this year.

The Lake County lost out to Meath at Croke Park last December but that experience could well stand them in good stead in 2021.

Westmeath are also in good shape after preserving their Lidl NFL Division 1 status with a recent relegation play-off final victory over Tipperary.

Longford won one game out of three in their Lidl NFL Division 3 campaign and will be hoping for better form in the Championship.

Lizzy Kent will guide the fortunes of Wexford after Paul Carty stepped down recently.

Wexford conceded 11 goals and were well beaten by Tyrone in the Lidl NFL Division 2 relegation play-off, a result which consigned the Model County to the third tier of League Football for 2022.

Sligo, meanwhile, lost out to Kildare in the Lidl NFL Division 3 semi-final, to end their promotion quest.

The Yeats County endured a demoralising 2020 Championship campaign, which culminated in a 0-2 to 7-18 drubbing against Clare, and they’ll be looking for much better this time.

This is a fixture brimming with potential. Roscommon were narrowly beaten by Westmeath in the 2020 semi-final, while Kildare have shown flashes of potential in recent times.

The Lilywhites lost against Laois in the recent Lidl NFL Division 3 Final and they’ll look to shrug off that disappointment as the Championship gets underway.

In the final quarter of their Division 3 semi-final, Roscommon looked well set for victory over Laois before they were reeled in down the home straight.

While Westmeath are favourites for Intermediate glory, these are two teams that will have a say.

Down are buoyant after winning the Ulster Intermediate title recently – while Offaly lost out in a Lidl NFL Division 4 semi-final against Louth.

Offaly finished bottom of a 2020 Championship group that also contained Roscommon and Wexford, and will be hoping for better in 2021.

Down, meanwhile, were second in their group behind Meath and lost out by just two points to the eventual winners last year.

If they get on a roll, Down could turn out to be real championship dark horses.

TG4 All Ireland Junior Championship – Round 1

Two teams with their eyes on the Junior prize meet in Callan.

Wicklow were runners-up last year and are many people’s favourites to go one better in 2021.

Limerick, the 2018 Champions and 2020 semi-finalists, were well beaten by Leitrim in the recent Lidl NFL Division 4 semi-final, but they fought until the end and were much better in the second half.