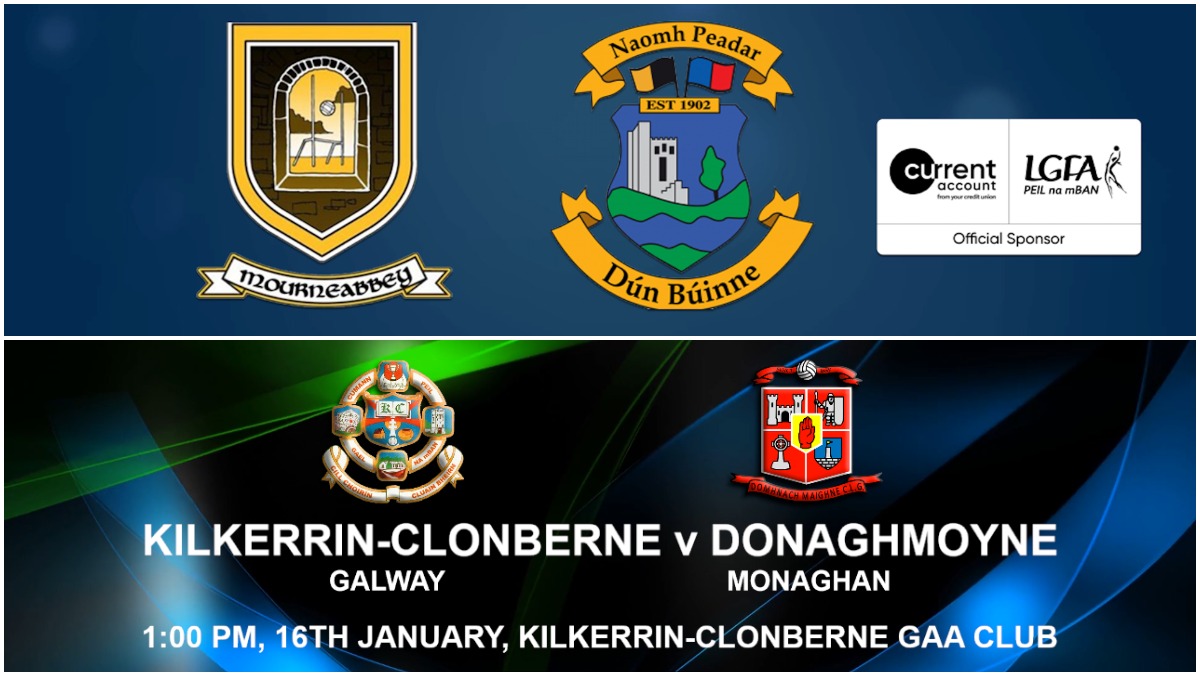 THE 2021 currentaccount.ie All-Ireland Ladies Senior Club Football Championship finalists will be revealed on Sunday – with two mouth-watering semi-finals down for decision.

Three of the four teams in action were also semi-finalists in 2019 – with Dunboyne from Meath the exception after their maiden Leinster win last year.

Cork stars Mourneabbey, the All-Ireland champions and back-to-back winners in 2019, welcome Dunboyne, with Meath’s TG4 All-Ireland winners Vikki Wall and Emma Duggan in their ranks, to the Mourneabbey Community Centre, while Kilkerrin-Clonberne from Galway, the runners-up in 2019, are hosts to five-time champions Donaghmoyne of Monaghan.

Both games get underway at 1pm – and both will be live and free on the Ladies Gaelic Football Association’s Facebook Page: http://bit.ly/2OvUJ2D

The semi-final winners will progress to the Final, which is pencilled in for Saturday, January 29.

OLD acquaintances will be renewed as Mourneabbey and Dunboyne face off on Sunday.

Dunboyne stars Emma Duggan and Vikki Wall, the 2021 TG4 Senior Players’ Player of the Year, starred against Cork when the sides met in a gripping All-Ireland semi-final last year, while Shelly Melia came off the bench.

On the Mourneabbey side, Eimear Meaney, Maire O’Callaghan, Ciara O’Sullivan, Doireann O’Sullivan and club captain Bríd O’Sullivan all featured for the Leesiders at Croke Park last August. This currentaccount.ie All-Ireland Senior Club semi-final will revive memories of that famous afternoon at Croke Park but it’s club glory at stake on this occasion.

For Dunboyne, this is uncharted territory. The Royal County representatives were crowned Leinster champions for the first time in 2021, when they dethroned Dublin outfit Foxrock-Cabinteely.

Now, they face the acid test against holders Mourneabbey, who are aiming for a sixth Final appearance.

Duggan and Wall will bring the star quality but experienced captain Fiona O’Neill grabbed a crucial goal against Fox-Cab and is another player to watch.

Mourneabbey were stung by West Cork Ladies in the 2020 Cork county final but have bounced back with a vengeance.

Managed by new Cork boss Shane Ronayne, Mourneabbey’s eyes are firmly set on making it a hat-trick of successive All-Ireland club title wins – and home advantage could prove crucial as they look to negotiate the penultimate hurdle.

KILKERRIN-Clonberne were left heartbroken at the TUS Gaelic Grounds in 2019 when Mourneabbey worked a brilliant late winning point from Laura Fitzgerald with just seconds left on the clock.

They’d also lost influential Galway star Nicola Ward to injury early on but were still right in it until the final whistle.

Kilkerrin-Clonberne will feel they have unfinished business to attend to in the All-Ireland series and they’re a side littered with quality and county stars.

The Ward and Divilly sisters are proven inter-county players while the team is also sprinkled with former underage Galway stars with All-Ireland medals in their back pockets.

Kilkerrin-Clonberne blazed a trail to the All-Ireland semi-finals by romping through the Connacht championship but the fear is that they have not been fully tested along the way.

Donaghmoyne, five-time All-Ireland Senior champions, will certainly provide that test and they’re battle-hardened after needing a replay to retain their Ulster title against Down outfit Bredagh before Christmas.

Donaghmoyne are looking to get back to a first All-Ireland Final since defeating Foxrock-Cabinteely in 2016.

And they still have a number of players who lined out on that occasion at their disposal.

Indeed, eleven players who started in that last Final win are in from the start for Sunday’s visit to the West.