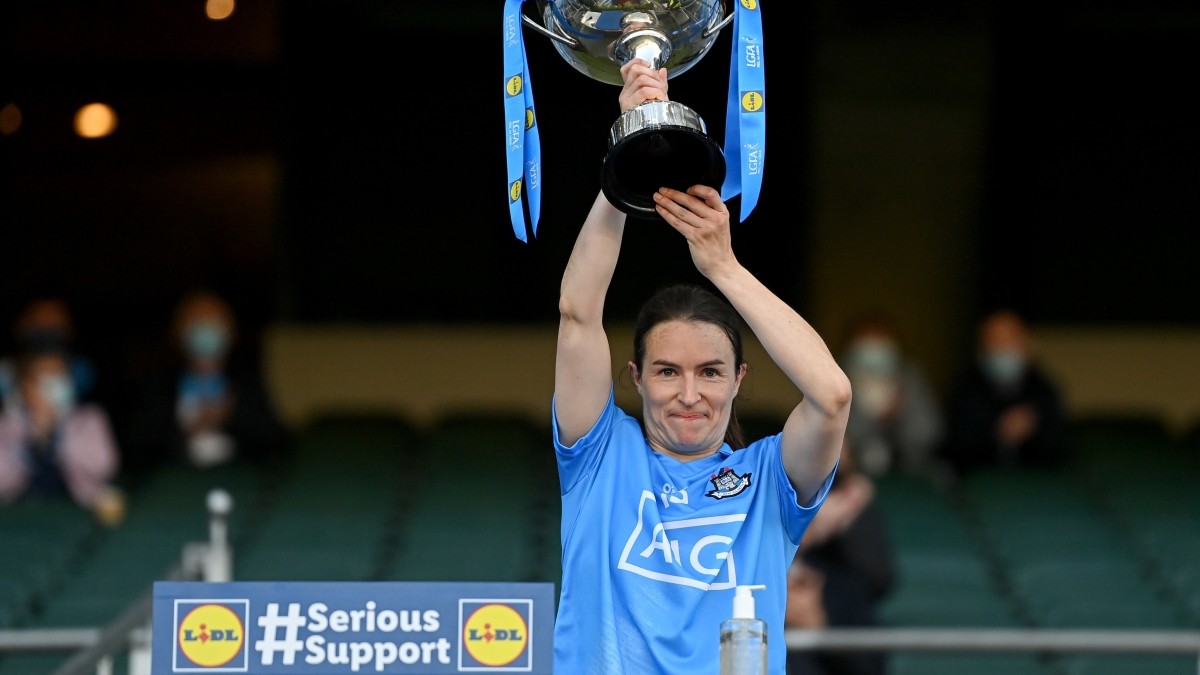 HOLDERS Dublin will begin the defence of their Lidl Ladies National Football League Division 1 crown with a trip to Waterford on the opening weekend of the 2022 campaign.  (Dublin captain Sinéad Aherne lifts the 2021 Division 1 League trophy in Croke Park. Photo by Ramsey Cardy/Sportsfile)

Division 1B of the competition also contains TG4 All-Ireland Senior champions Meath and Cork, the 12-time Division 1 winners who lost out to Dublin in the 2021 top flight decider at Croke Park.

Cork and Meath will also meet on the opening weekend (February 13) in what will be the first competitive meeting between the counties since the dramatic TG4 All-Ireland Senior Championship semi-final back in August, when Meath staged a sensational comeback to take the game to extra-time, before eventually prevailing.

Dublin will take on Cork in Round 2, before 2021 TG4 All-Ireland Finalists Dublin and Meath renew acquaintances in Round 3.

Meath will operate in the top tier next year after they won the Division 2 title in 2021, to gain promotion.

Division 1A of the 2022 Lidl National League contains Donegal, Galway, Mayo and Westmeath – with two teams to emerge from each of the four-team divisions to contest the semi-finals on March 19.

Division 2A contains three Munster teams, namely Clare, Kerry and Tipperary, who were relegated from the top flight this year.

They’ll be joined by 2021 Division 3 Champions Laois, while Division 2B is an all-Ulster affair as Armagh, Cavan, Monaghan and Tyrone prepare for some intriguing games.

Division 3A contains newly-promoted Louth, who will play against Down, Roscommon and Sligo, while Wexford (relegated from Division 2 in 2021), Kildare, Wicklow and Longford make up an all-Leinster Division 3B.

In Division 4A, Ulster sides Antrim, Derry and Fermanagh will be joined by Leitrim, as Fermanagh prepare for life in the fourth tier again following relegation in 2021.

In Division 4B, London are preparing for a return to League football, and they’ll pit their wits against Carlow, Offaly and Limerick.

The Division 2 semi-finals will be played on March 19, with the semi-finals in Divisions 3 and 4 down for decision on March 20.

Division 1A – Donegal vs Galway, Mayo vs Westmeath

Division 1B – Meath vs Cork, Waterford vs Dublin

Division 2A – Kerry vs Tipperary, Laois vs Clare

Division 2B – Cavan vs Monaghan, Armagh vs Tyrone

Division 3A – Down vs Roscommon, Sligo vs Louth

Division 3B – Wexford vs Kildare, Wicklow vs Longford

Division 4A – Leitrim vs Fermanagh, Antrim vs Derry

Division 4B – Offaly vs Carlow, Limerick vs London

Division 1A – Galway vs Mayo, Westmeath vs Donegal

Division 1B – Dublin vs Cork, Waterford vs Meath

Division 2A – Laois vs Tipperary, Clare vs Kerry

Division 2B – Tyrone vs Monaghan, Armagh vs Cavan

Division 3A – Sligo vs Down, Louth vs Roscommon

Division 3B – Wicklow vs Wexford, Longford vs Kildare

Division 4A – Derry vs Leitrim, Fermanagh vs Antrim

Division 4B – Limerick vs Offaly, Carlow vs London

Division 1A – Mayo vs Donegal, Westmeath vs Galway

Division 1B – Cork vs Waterford, Meath vs Dublin

Division 2A – Kerry vs Laois, Tipperary vs Clare

Division 2B – Cavan vs Tyrone, Monaghan vs Armagh

Division 3A – Down vs Louth, Roscommon vs Sligo

Division 3B – Wexford vs Longford, Kildare vs Wicklow

Division 4A – Derry vs Fermanagh, Leitrim vs Antrim

Division 4B – Carlow vs Limerick, Offaly vs London