FOOTBALL – ‘All we are looking for at the end of the day is respect. Because of this, there has been a mindset change’ – Donegal’s Emer Gallagher 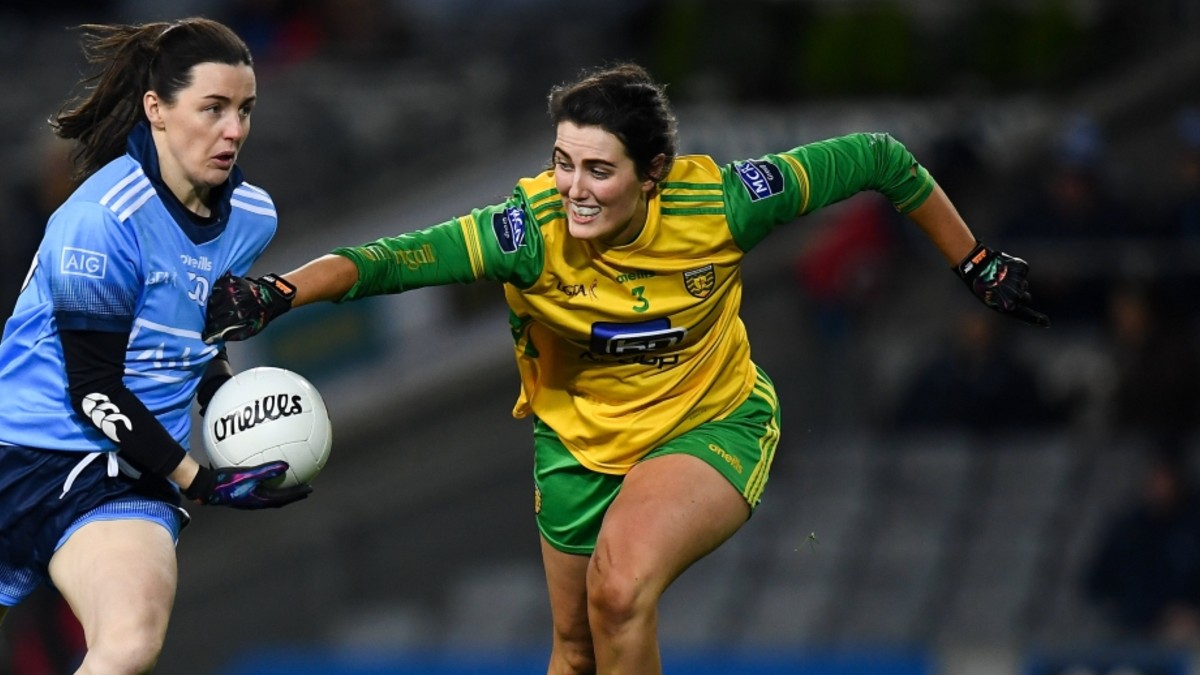 Donegal’s Emer Gallagher says her side is facing into the new season with the knowledge that they can match any team in the country – even four-in-a-row TG4 All-Ireland Senior champions Dublin.

The Ulster side’s All-Ireland hopes ended as soon as they began in 2020, when Dublin edged their championship opener by three points, all but ending Donegal’s hopes of progressing from a three-team pool.

But after conceding one of the most bizarre goals of the year in a game where they matched Dublin, Lidl One Good Club ambassador Gallagher says it was a light bulb moment for Donegal.

Sinéad Aherne’s attempt for a point rebounded down and into the back of the net off an upright – and Donegal were on the back foot from there.

“At the time it was so disappointing to lose to Dublin. You could say it came down to that fluke goal in the last few minutes, but we were so disappointed after that game,” said Termon defender Gallagher.

“I found it very hard to watch the game back for a long time after. I kind of felt like if we had the belief in the first half that we had in the second it could have been a very different game.

“We definitely went into the game having huge respect for Dublin, as I still do. They are a fantastic team, they are so well structured. Every player in that team gives 100 per cent for every ball they are going for.

“I think the belief is something we will bring from last year into this one. We are well able to look at any team in the country and we have the players to do it. That’s the one thing I’ll take from last year.”

A teacher at Loreto Secondary School in Letterkenny, Gallagher says she has been blown away by the response to her role in Lidl’s recent ‘Level the Playing Field’ initiative. “I’m doing my best to keep racking up the stamps on the card. My own club, Termon, has really gotten on board with it.”

An inter-county player with Donegal since 2011, Gallagher (26) has witnessed a change in attitude towards Ladies football in her time, with new levels of respect given to the game by the general public.

“I always thought that slogan ‘Level the playing field’ was something that was really powerful and I could identify with it, having played for Donegal for 11 seasons. I have seen a huge progression from when I started but there is still always progress to be made as well.

“Since the advert came out, people have said they have really enjoyed watching the Ladies game in the last year. They didn’t realise we were as good as we are and that it would be as good to watch. When you have Lidl on board with something like this, it definitely changes people’s attitude to the sport.

“All we are looking for at the end of the day is respect. Because of this, there has been a mindset change. I feel like we have gotten more respect because of it.”

The form of Gallagher, Geraldine McLaughlin, Karen Guthrie, Yvonne Bonner and Katy Herron was key to Donegal’s challenge in the TG4 All-Ireland Senior Championship in 2020, but Gallagher thinks the next generation coming through could be even better.

A blend of new and experienced players could be the key to taking the next step for Maxi Curran’s side. So what can they achieve?

“What can’t we achieve in 2021? I think we are always the team that people are looking at, the standard of players that we have. It is really about time that we capitalise on that before all of us old fogies have to hang up the boots!

“I think the huge amount of young talent coming through is huge. They would have blown our socks off that that age, we never could have competed with that standard. They are revitalising the team and are pushing us all. We are all worried about our place on the team with these young girls stepping on our heels and that means we will never become complacent.

“It is a lovely set-up to be part of, having that youth involved with the experience of the older girls, there is a really good bond there. I’d love nothing more than for things to go right and for those girls to experience huge successes with Donegal.”

Help to Level the Playing Field with Lidl Plus and raise up to €20,000 for your chosen LGFA club. See www.lidl.ie/serious-support for full details and instructions of how you can play your part.

Lidl Ireland is the Official Retail Partner to the Ladies’ Gaelic Football Association and title sponsors of the Lidl National Football Leagues. #SeriousSupport