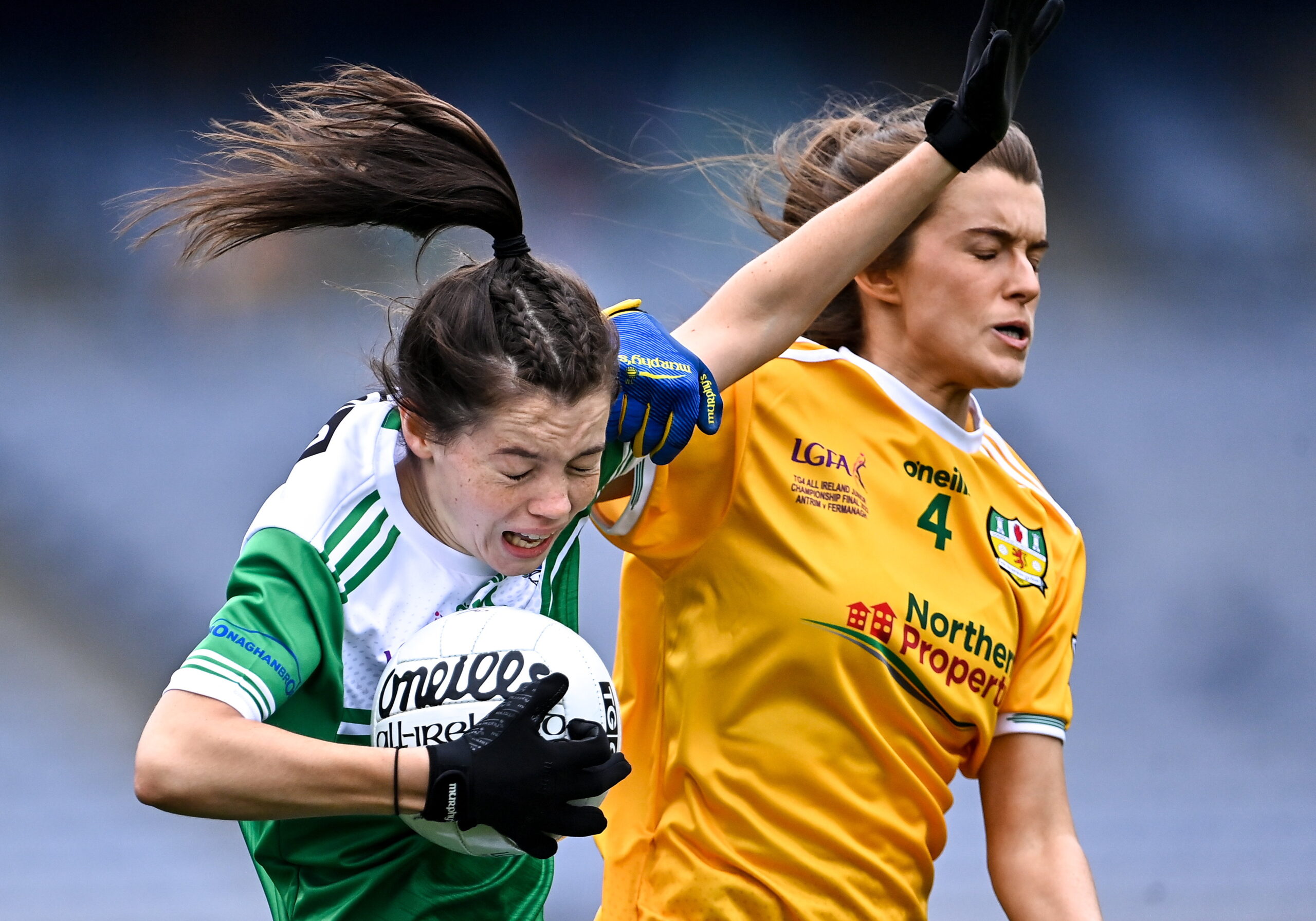 By DAIRE WALSH (Eimear Smyth of Fermanagh in action against Niamh McIntosh of Antrim. Photo by Piaras Ó Mídheach/Sportsfile)

Orlaith Prenter came to Antrim’s rescue at Croke Park as her last-gasp free earned the Saffrons a draw against Ulster rivals Fermanagh in the TG4 All-Ireland Junior Championship Final.

Thanks in no small part to the scoring prowess of Bláithín Bogue (0-7) and Eimear Smyth (1-3), Fermanagh were in line to pick up their third title at this grade. However, there was a final sting in the tail, as Prenter’s sixth score of the contest ensured the two sides will have to meet again in a fortnight’s time.

Fermanagh edged in front early on with quickfire points from Smyth and Aisling O’Brien, before unanswered scores from Áine Tubridy, Prenter (two) and Gráinne McLaughlin helped Antrim to open a two-point gap by the 11th minute.

This cushion remained intact on the first-quarter mark following traded efforts between Bogue and McLaughlin.

While another Bogue point reduced Fermanagh’s deficit to the bare minimum on 17 minutes, Antrim immediately responded with a superbly-taken goal from Maria O’Neill.

The outstanding Bogue kept the Erne County firmly in contention with three more points from play, only for contributions from Prenter and captain Cathy Carey to propel Antrim towards a 1-7 to 0-7 interval advantage.

It briefly looked like Fermanagh had restored parity just two minutes after the resumption, but Bogue’s palmed finish off a Smyth free was ruled out for a square ball. And even though the Saffrons had lost corner-back Niamh McIntosh to the sin-bin in advance of this incident, they dug deep in her absence.

Despite Fermanagh conjuring scores from Smyth, the peerless Bogue and Sarah Britton, Carey, O’Neill and McLaughlin (free) all found the range for Antrim. Bogue and the impressive Prenter proceeded to swap points, before Fermanagh received a massive let-off when the raiding O’Neill rattled the post on 45 minutes.

James Daly’s outfit then fell four points adrift courtesy of a Prenter free but their challenge was reignited when Smyth smoothly converted a 49th minute penalty after Bogue had been fouled by Sarah O’Neill.

Fermanagh subsequently levelled matters through Erin Tierney and while Bogue was yellow carded, a monstrous Smyth effort looked set to seal the win for Fermanagh.

Yet Antrim were not prepared to go down without a fight and Prenter kept her composure to slot a last-minute free and force the tie into a replay.