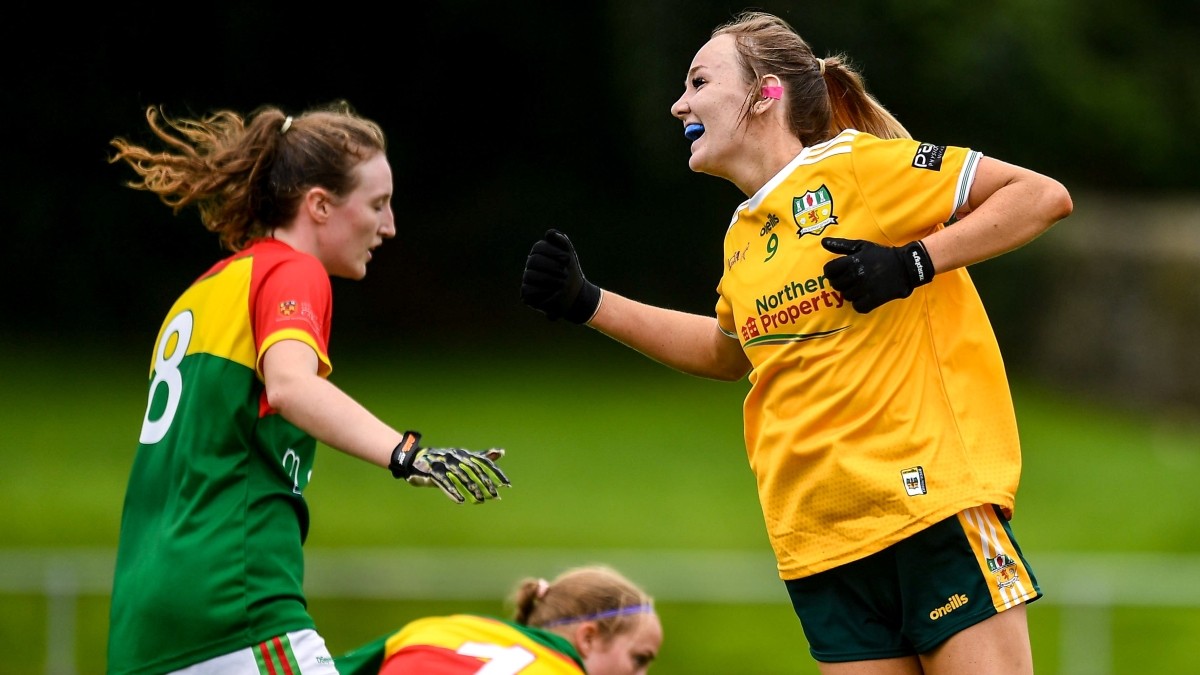 Antrim are through to this year’s TG4 All-Ireland Junior final after edging out a valiant Carlow side in a thrilling semi-final which went to extra-time at Dunleer.

Both sides were well acquainted with each other having drawn in the group stages at the same venue but late goals in extra-time from Ciara Brown and Northern Ireland netball player Michelle Magee finally prised a winning gap between the two stubbornly even teams.

Clíodhna Ní Shé looked like she had sent her Carlow side to their first ever final with a goal in the first half of extra-time to complete her hat-trick but Antrim dug deep and will now play Wicklow in the decider at Croke Park.

Carlow full forward Ní Shé, top scorer across all three grades of Ladies championships, opened the scoring to give the Leinster side the better start after dominating possession with some patient build-up play.

Antrim responded in dramatic fashion when midfielder Emma Ferran powered on to a ball over the top. The incisive run provided the space to open up inside and Ferran had the vision to pick out Caitlin Taggart who finished neatly to the corner.

That hard line running was a staple of Antrim’s play throughout. Áine Tubridy’s influence from half back grew and time and again Gráinne McLaughlin was on hand to fire over for the Ulster side with eight scores in total.

Carlow kept in touch with Ní Shé’s sheer presence up front at times and her inside partner Dannah O’Brien clipped over five first-half points to make it 1-9 to 0-10 at the break.

Michelle Magee’s impact was seismic to Antrim’s cause, the international netball player had four scores to her name upon the resumption in a devastating cameo off the bench but it was all Carlow at this stage.

Carlow manager Mark Keating introduced an impact sub himself in Rachel Sawyer. The dual star played camogie the previous day and her blistering pace set up Ní Shé for her opening goal. Ní Shé then added a penalty in the Barrowsiders excellent third quarter.

The experienced Cathy Carey kept her composure in the closing stages for Antrim to force the game to extra-time after frees from Ní Shé and O’Brien looked to seal it for Carlow. And Antrim pushed on from there will now play their first decider since their last victory in 2012.