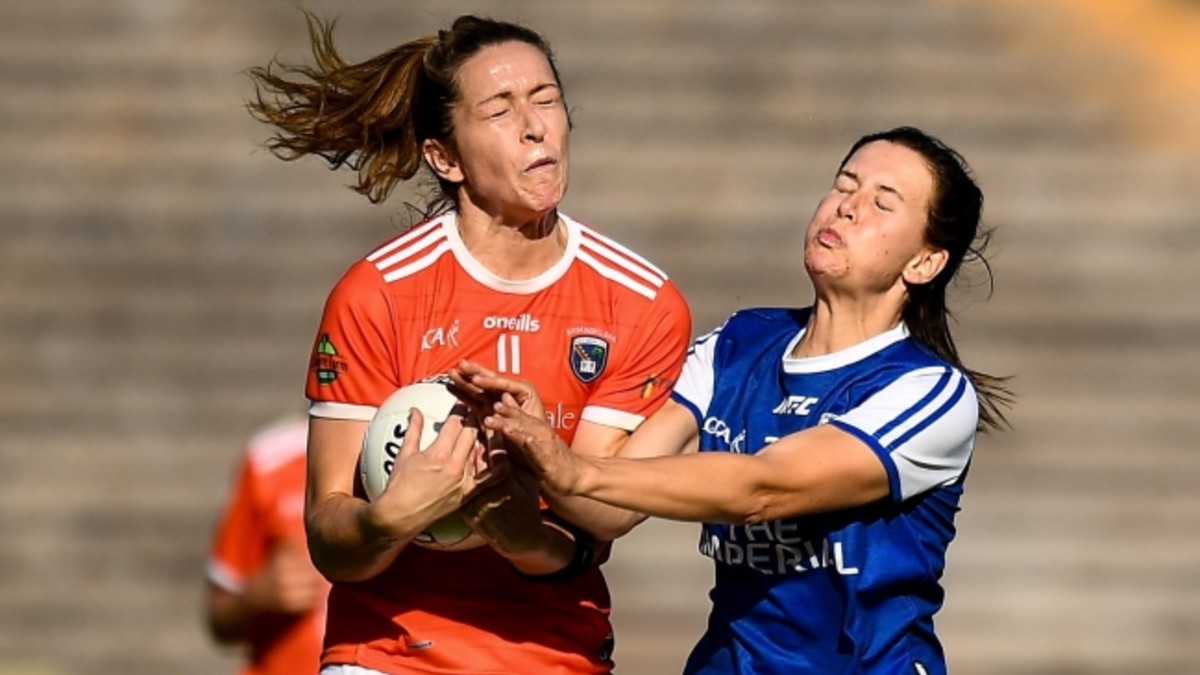 By RONAN O’NEILL (Caroline O Hanlon of Armagh in action against Sinead McKenna of Cavan at St Tiernach’s Park in Monaghan. Photo by Ben McShane/Sportsfile)

Aimee Mackin scored 0-10 as Armagh made it back-to-back wins in Group 1 of the TG4 All-Ireland Senior Championship with victory over Cavan at St Tiernach’s Park in Clones.

The victory secures Armagh’s place in the TG4 All-Ireland Quarter-final, while it also guarantees Mayo will progress from Group 1, with the pool winners to be decided when the teams meet next weekend.

Armagh had taken a 0-7 to 0-3 lead at the first water-break and Caroline O’Hanlon scored their goal shortly afterwards. But Cavan recovered and Aishling Sheridan brought them back into the game with her wonderful finish.

Armagh pushed on after half-time and goals from Aoife McCoy and Kelly Mallon sealed an important win.

Cavan scored first through Aisling Gilsenan, but that was quickly cancelled out by O’Hanlon. Fionnuala McKenna and Aishling Sheridan then traded points, but Armagh scored five of the next six points and with Aimee Mackin (three), McKenna and O’Hanlon on target, they took a four-point lead into the first break.

Cavan landed two in a row through Gilsenan, but the loss of Geraldine Sheridan to a yellow card in the 22nd minute was a setback. With the numerical advantage, O’Hanlon finished off Mallon’s attempted shot to the net for an Armagh goal seven minutes before half-time.

Armagh looked to be cruising with a five-point lead but Sinéad Greene settled Cavan, before a mix-up in the Armagh defence allowed Aishling Sheridan to blast a fantastic shot past Anna Carr and into the Armagh net.

After trailing 1-8 to 1-6 at half time, Cavan were back level within six minutes of the resumption as Lauren McVeety and Geraldine Sheridan scored.

But Armagh finally kicked into gear and they scored an unanswered 1-2 to open a gap. Aimee Mackin added two points to McCoy’s 42nd minute strike.

Aishling and Geraldine Sheridan tried their best to keep Cavan in the game but they couldn’t hold-off the next surge when Armagh scored 1-7 without reply between the 47th and 59th minutes.

Mallon scored the killer third goal and Cavan were out on their feet with a late goal from a penalty courtesy of Amy Rooney, proving just a consolation.