FOOTBALL: Bouncing right back – The Big Interview with Maria Reilly of Mayo 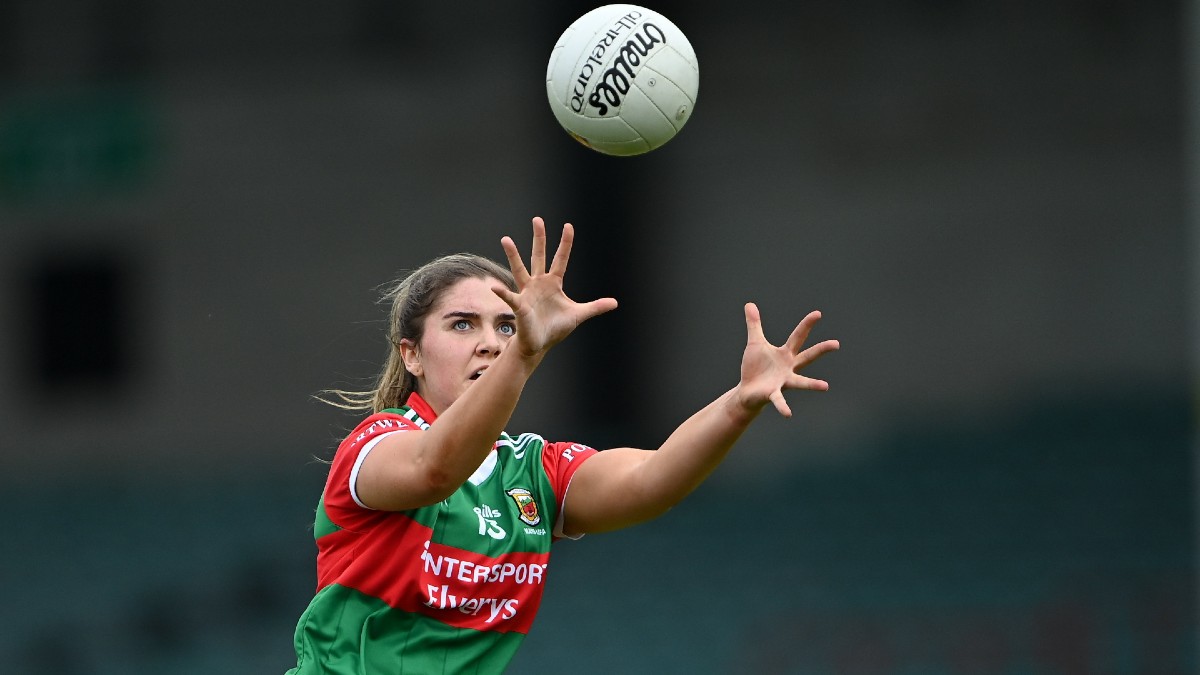 By DARAGH SMALL  (Maria Reilly of Mayo during the Lidl Ladies National Football League Division 1 semi-final match against Dublin at LIT Gaelic Grounds during which she suffered a broken jaw. Photo by Piaras Ó Mídheach/Sportsfile)

It’s been a tough summer on a liquid diet after breaking her jaw against Dublin but Mayo’s Maria Reilly is hopeful of getting her teeth into some championship action.

She has returned to contact training and is hoping to be available for Monday’s TG4 All-Ireland SFC quarter-final against neighbours and arch rivals Galway.

The 21-year-old suffered the injury early last month and was unable to eat solids for six weeks but she says the sacrifice has been worth it and she’s now back fit for action.

Growing up in the picturesque surrounds of Bangor-Erris, she used to help her dad Paddy run the family butcher and travelling shop business.

Reilly’s Victuallers is a family business going almost three generations now and their travelling shop kept the parishes of Kiltane and Kilcummin, along with parts of Belmullet, fed during lockdown over the past 18 months.

She is going into her third year studying PE and Biology Teaching at Dublin City University but the rest of her time is spent in and around the Erris Peninsula.

“They say the next stop is America! I am about an hour from Castlebar but we train in the Centre of Excellence in Ballyhaunis so that is an hour and a half from the house and I am doing that three days a week,” said Reilly.

“You do clock up the miles but we just get so used to it down through the years. I am playing underage since I was 12 so you become so used to that road too. Anything less than an hour is a short journey now.

“When I am in college, you are coming down during the week and that was mental stuff altogether. When you clocked up the amount of hours you are in the car it was crazy.

“I come down to Mayo on a Friday to training, then go home to Bangor then probably sleep in my house on a Friday night get ready for college and go back to training on Sunday morning and then up to Dublin again.

“I was living out of bags, Mum used to tell me she never saw me.”

But it was all worthwhile as the Kiltane youngster fought her way up through the underage ranks and then into the Mayo senior set-up.

Coming off the back of a Covid-19 interrupted year, Mayo wanted to a make a big impression in 2021 and they did just that by reaching a Lidl National Football League Division 1 semi-final against Dublin.

That June fixture won’t live long in the memory for the red and white though, as they fell to a 4-15 to 0-10 defeat at the LIT Gaelic Grounds in Limerick.

Reilly has an altogether different reason to forget that day as she broke her jaw in a tackle.

“I think there was five minutes left in the game. I went in, I over-committed and thought I was going to get a ball that wasn’t mine at all. I just got a nick of a shoulder into the face,” said Reilly.

That collision resulted in a broken jaw in two places and two plates being inserted into it. But worst of all, a six-week stint without solid food, a dreaded scenario for a butcher’s daughter.

“When I went down first, I freaked out because my teeth were just pumping blood. I was just in pure panic mode, probably don’t remember half of it because I was freaking over my teeth. If anyone knows me, I am such a perfectionist about them,” said Reilly.

“When the teeth were gone a bit lop-sided, I went into the medical room. Everyone was telling me to go to the hospital and I was like no, I need to go to the dentist. They were having none of me then, they looked in my mouth and said we will send you for an X-ray.

“When I did get in for the X-ray, I found out I had broken my jaw.”
It was a disaster for Reilly and her season could have been finished then had she not followed the rules of the rigorous liquid diet.

She found out what her favourite lemon yogurt was and at one stage was eating porridge three times a day.

On a number of occasions she would cook and bake treats for the girls at training, protein squares and surprise cookies were the favourites. But she couldn’t even sample those.

“It was so difficult when I look back on the first few weeks when I was so moody at home. I was completely ‘hangry’,” said Reilly.

“I was injured, I couldn’t comfort eat. I would come up and dinner time is the worst. They would be having a steak or something else nice and I would be looking at them and I would be tucking into my soup. I thought ‘no I can’t do six weeks of this’.” But she did.

Last Sunday, Reilly headed for Dublin to watch the Mayo men beat Galway in the Connacht final at Croke Park.

It coincided with her first proper meal in six weeks, she went to Gourmet Food Parlour in Santry and indulged in toast, avocado and eggs. The added scone gave her the crunch she craved.

This Monday, Galway are on the menu for the Mayo Ladies in the TG4 All-Ireland Senior Championship quarter-finals, and Reilly is hoping to make an appearance after returning to full-contact training this week.

“We are border counties so anytime you are going out playing Galway there is always another motivation to win,” she said.

“It is a good rivalry and I don’t think it is going to go anywhere for a long time.”